Death toll in Bengal due to Cyclone Amphan rises to 80

Prime Minister Narendra Modi on Friday flew down to Kolkata to take stock of the situation in large swathes of West Bengal that were decimated by cyclone 'Amphan' and announced an advance assistance of Rs 1,000 crore for restoration work, as the death toll due to the natural calamity mounted to 80. 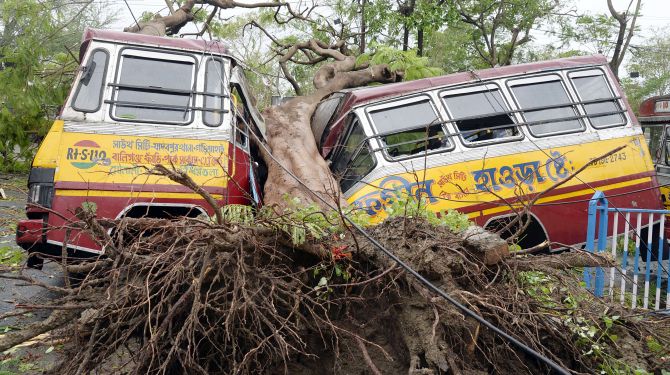 IMAGE: A mini bus is damaged after a huge tree got uprooted and fell on the bus owing to the heavy rainfall accompanied by the Super Cyclone Amphan, in Kolkata. Photograph: ANI Photo

Modi along with Chief Minister Mamata Banerjee and Governor Jagdeep Dhankhar conducted an aerial survey of the cyclone-ravaged areas earlier in the day and held a review meeting.

Prior to the meeting, Banerjee demanded that 'Amphan' be declared a national disaster. She said the state had suffered losses to the tune of Rs 1 lakh crore in the fiercest cyclone to hit the state in over 100 years. 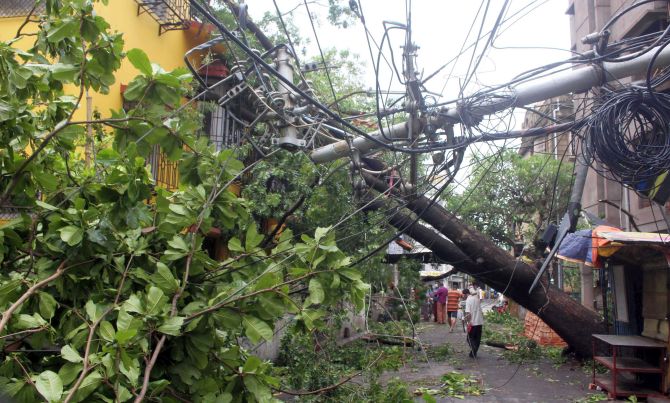 IMAGE: Trees and poles got uprooted and block the way during the landfall of cyclone Amphan, in Kolkata. Photograph: ANI Photo

"The prime minister has announced Rs 1,000 crore emergency fund... what is the package I do not know. I have told him that we will give him the details. It will take some time to assess the overall situation, but the damage is worth more than Rs 1 lakh crore," she said.

Banerjee said she reminded the PM about Rs 53,000 crore the central government owed to the state for various social security schemes. 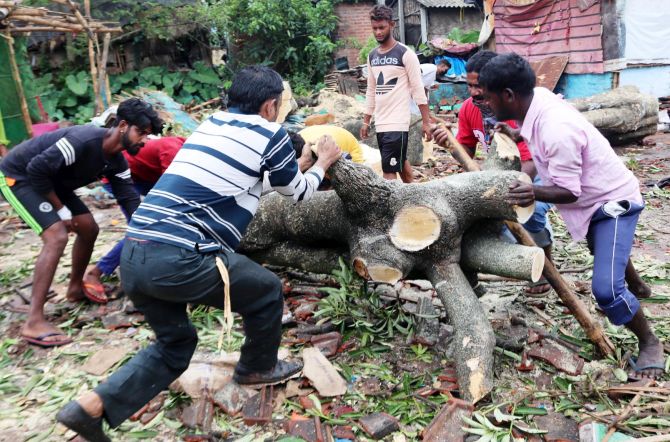 IMAGE: Civil defence volunteers remove atree which got uprooted during the landfall of cyclone Amphan, in Burdwan. Photograph: ANI Photo

The PM also announced an ex gratia of Rs 2 lakh each for families of the deceased and Rs 50,000 for the injured.

Appreciating Banerjee's efforts in galvanising the state administration to deal with the natural disaster amid the COVID-19 pandemic, Modi said the whole country stands with West Bengal.

Meanwhile, eight more bodies were recovered from different parts of the state since Thursday evening, raising the death toll to 80, officials said.

In various parts of the state, bodies were found floating on water, which were recovered by disaster management teams and sent for postmortem, they said.

The number of fatalities is likely to go up as many places are still inaccesible due to the devastation unleashed by the cyclone, officials said. 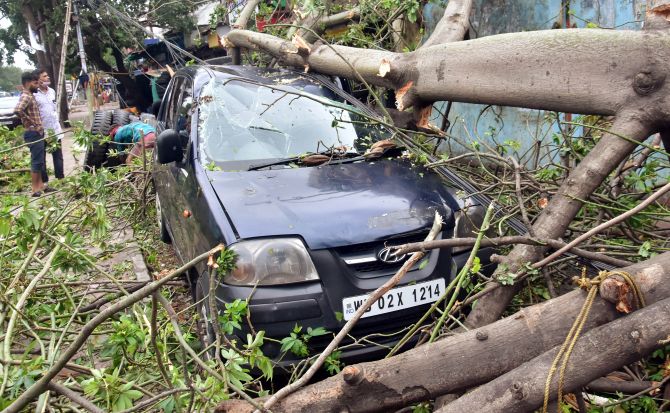 IMAGE: Trees get uprooted caused due to the heavy rainfall accompanied by the Super Cyclone Amphan and damage a car which was parked nearby, in Kolkata. Photograph: ANI Photo

"In this time of distress and despair, the entire country and the Centre are with the people of Bengal. The Union government will extend all help to the state," Modi said.

The Centre will also deploy a team to assess the extent of damage in the state, he said.

West Bengal Bharatiya Janata Party president Dilip Ghosh said the central government should directly transfer the money into the accounts of the beneficiaries to avoid any 'irregularities'.

Dissatisfied with the assistance amount, Leader of the Congress party in Lok Sabha, Adhir Ranjan Chowdhury said Rs 1,000 crore is 'nothing compared to the damage that the state has suffered'.

Lakhs of people were rendered homeless as the cyclone cut a swathe through half-a-dozen districts of West Bengal on Wednesday night, blowing away shanties, uprooting thousands of trees and swamping low-lying areas. 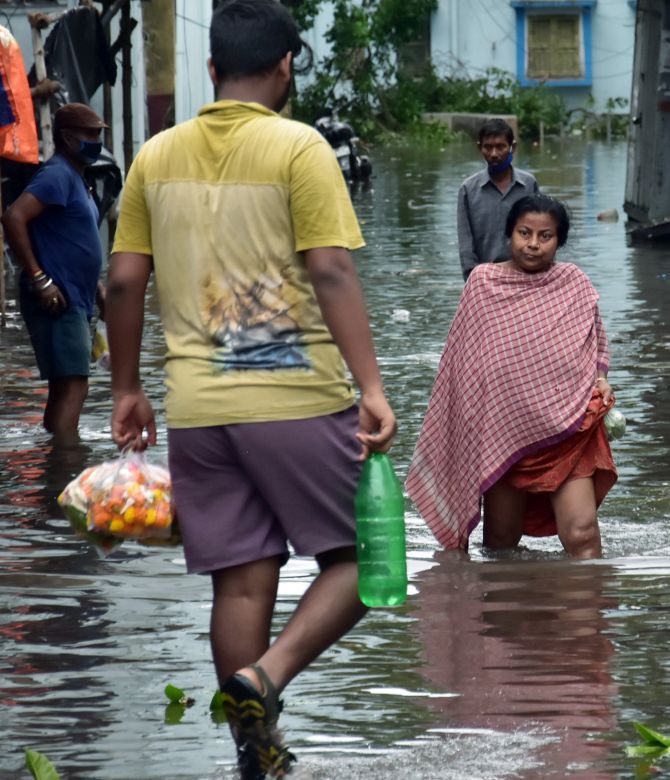 In some parts of the state, survivors were left with houses reduced to debris and water-filled farmlands.

Although electricity and mobile services were restored in some parts of Kolkata and North and South 24 Parganas -- the two worst-hit districts -- large areas of the city continued to remain without power as electric poles and communication lines had been blown away by super strong winds.

Meanwhile, several protests demanding relief and restoration of electricity and drinking water supply took place in parts of the state, including the state capital.

Kolkata Mayor Firhad Hakim assured that normalcy would be restored within a week.

Over 5,000 trees, beside a few hundred electric posts, traffic signals and police kiosks have been uprooted in and around Kolkata, he said.

"I can assure the people of Kolkata that normalcy would be restored within a week. We are in touch with the private power supply provider and had asked them to restore the lines as early as possible," the mayor said.

Out of the eight bodies that were recovered, four were from Kolkata and two each from South 24 Parganas and Howrah.

Teams of the NDRF and the State Disaster Relief Force (SDRF) have been working on a war-footing to clear the roads blocked by fallen trees.

Congress leader Rahul Gandhi on Friday said the widespread devastation caused by cyclone Amphan in West Bengal and Odisha is disturbing, as he condoled the death of those killed in the natural calamity. 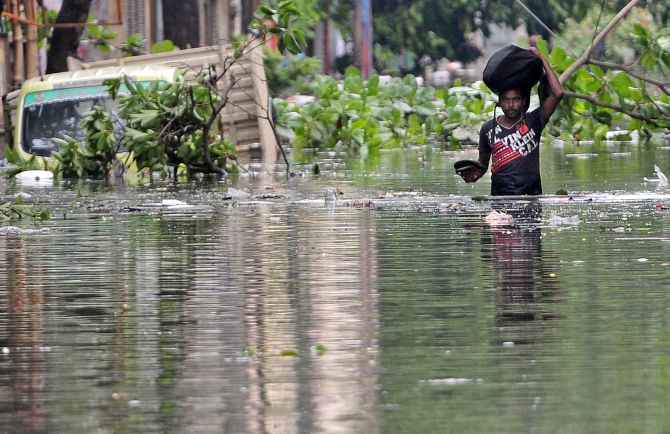 Cyclone Amphan has left 80 people dead and thousands homeless in West Bengal, battering several parts of the state and washing away bridges and swamping low-lying areas.

"The widespread devastation caused by Cyclone Amphan in West Bengal & Odisha is disturbing," Gandhi said in a tweet.

"My condolences to the families of those who have perished & I pray the injured make a speedy recovery. I offer my support to the brave people of these two states in this time of crisis," the former Congress president said.