United States President Donald Trump made a surprise drive-past to greet his supporters outside a military hospital where he has been admitted since Friday for the treatment of the deadly coronavirus, drawing criticism from Democrats and a leading medical expert. 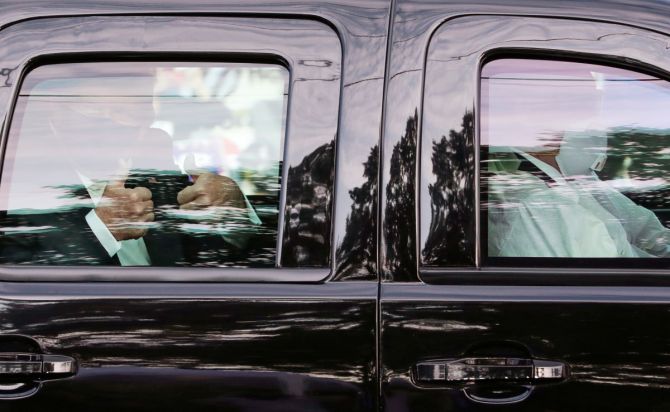 IMAGE: US President Donald Trump gives two thumbs up to supporters as he rides in the presidential SUV with two Secret Service agents wearing medical protective masks, goggles and protective gowns in the front seat as they drive past the front of Walter Reed National Military Medical Center, where he is being treated for coronavirus disease in Bethesda, Maryland. Photograph: Cheriss May/Reuters

The brief drive through Rockville Pike in Bethesda, a Maryland suburb of Washington DC, that separates the National Institute of Health and Walter Reed National Military Medical Center, brought cheers to his supporters who have been praying for the 74-year-old president's health ahead of the presidential election next month.

"I really appreciate all of the fans and supporters outside of the hospital. The fact is, they really love our Country and are seeing how we are MAKING IT GREATER THAN EVER BEFORE!" Trump said in a tweet soon after his unannounced drive-past.

Trump, a Republican is seeking another term in the White House. He is being challenged by former Vice President Joe Biden of the Democratic Party in the November 3 election.

Trump and the First Lady Melania tested positive for COVID-19 on Thursday night.

Trump was shifted to the military hospital on Friday, which his doctors and White House said was taken out of abundance of caution.

On Sunday, before going out to wave at his supporters, Trump in a video posted on his Twitter handle said he will give "a little surprise to some of the great patriots, who have been on the streets, and they have been out there for a long time".

"They love our country. I am not telling anybody but you, I am about to make a little surprise visit," Trump said. IMAGE: Trump waves to supporters as he briefly rides by in the presidential motorcade in front of Walter Reed National Military Medical Center. Photograph: Cheriss May/ReutersThe US president was seen wearing a mask and waving at his supporters from inside the black SUV. The windows were closed.

"When I look at the enthusiasm. We have enthusiasm like probably nobody ever had," he said.

Trump in his short video message said he has learnt a lot about COVID-19, literally by going to school. "This is the real school," he said in his video clip from inside the military hospital. "I get it. I understand it," he said.

White House spokesman Judd Deere said appropriate precautions were taken in the execution of this movement to protect the US president.

"The movement was cleared by the medical team as safe to do," he said.

"President Trump took a short, last-minute motorcade ride to wave to his supporters outside and has now returned to the Presidential Suite inside Walter Reed," Deere said in another statement soon thereafter.

"More than 205,000 Americans are dead. We need leadership. Not photo ops," tweeted Hakeem Jeffries, chairman of the Democrats in the US House of Representatives.

IMAGE: Supporters rally for US President Donald Trump outside of the Walter Reed National Military Medical Center, where he is being treated for coronavirus disease. Photograph: Cheriss May/ReutersA senior doctor at the military hospital strongly criticised the president's motorcade ride due to the infection risk inside the car.

"That Presidential SUV is not only bulletproof, but hermetically sealed against chemical attack. The risk of Covid-19 transmission inside is as high as it gets outside of medical procedures," Dr James Philips, Chief of Disaster Medicine, tweeted.

"Every single person in the vehicle during that completely unnecessary Presidential "drive-by" just now has to be quarantined for 14 days. They might get sick. They may die. For political theater. Commanded by Trump to put their lives at risk for theater. This is insanity," he wrote in another tweet.

The White House Correspondents Association or WHCA expressed its outrage at the decision of the president.

"It is outrageous for the president to have left the hospital -- even briefly -- amid a health crisis without a protective pool present to ensure that the American people know where their president is and how he is doing," the WHCA said in a statement.

Two secret service agents wearing masks were seen inside the black SUV. The pool of reporters organised under the WHCA, who cover the president, were not informed in the presidential movement outside the hospital.

"Now more than ever, the American public deserves independent coverage of the president so they can be reliably informed about his health," the WHCA said.

Earlier in the day, his doctors said the president was doing well, and he had not had fever since Friday. They hoped that the president might be discharged from the hospital on Monday.

Dr James Phillips, the physician attending the US president, has slammed Donald Trump for driving past his supporters for a brief appearance outside the Walter Reed National Military Medical Center.

"Every single person in the vehicle during that completely unnecessary Presidential 'drive-by' just now has to be quarantined for 14 days. They might get sick. They may die. For political theatre. Commanded by Trump to put their lives at risk for theatre. This is insanity," Phillips said.