India's COVID-19 tally went past 39 lakh on Friday with 83,341 fresh cases reported in a span of 24 hours, while the number of recoveries crossed the 30-lakh mark, pushing the recovery rate of coronavirus patients in the country to 77.15 per cent, according to the Union health ministry. The COVID-19 case fatality rate has further declined to 1.74 per cent in the country.

There are 8,31,124 active coronavirus cases in the country, which account for 21.11 per cent of the total caseload, the data stated.

The country registered over 80,000 fresh COVID-19 cases for the second consecutive day. IMAGE: A health worker holds a test tube before collecting a blood sample for the serological survey at an Anganwadi Center in New Delhi. Photograph: Manvender Vashist/PTI Photo

India is the third worst-hit nation by the pandemic after the US and Brazil in terms of cases and deaths, according to the Johns Hopkins University, which has been compiling COVID-19 data from all over the world. IMAGE: Workers carrying LPG cylinders on carts on their way to deliver them to consumers during Unlock 4 in Kolkata. Photograph: Swapan Mahapatra/PTI Photo

Ten fatalities each were reported from Kerala and Telangana, nine from Uttarakhand, eight each from Goa and Odisha, seven each from Assam and Puducherry, six from Jharkhand, five from Himachal Pradesh, four from Chandigarh, three each from Manipur and Tripura while one death was recorded in the Andaman and Nicobar Islands. 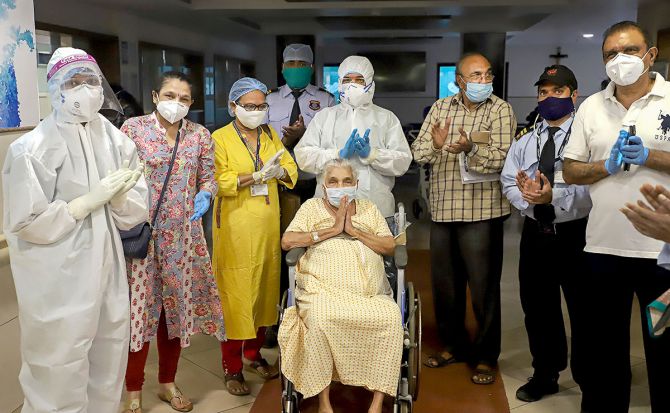 IMAGE: 86-year-old Regina Parmer, discharged from a hospital after completely recovering from COVID-19, at Bandra in Mumbai. Photograph: PTI Photo