For the first time since the COVID-19 outbreak, India recorded over 10,000 new cases in a day taking the tally to 2,97,535, while the death toll rose to 8,498 with a record single-day spike of 396 fatalities, according to the Union health ministry data. 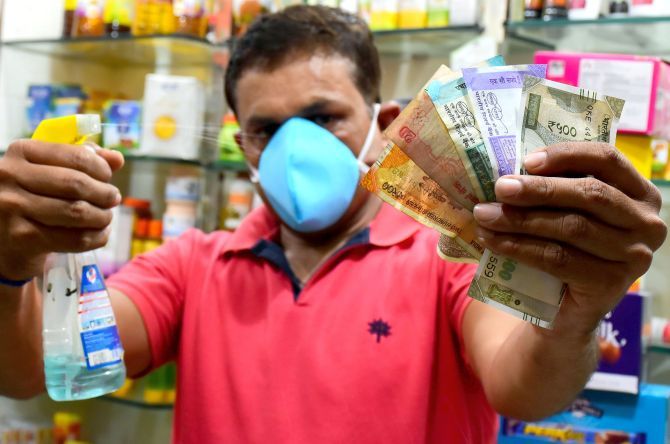 IMAGE: A shopkeeper sprays sanitizer on currency notes at his shop in Jabalpur. Photograph: ANI Photo

The country has registered 10,956 new coronavirus infections in the last 24 hours till Friday 8 am.

India on Thursday went past the United Kingdom to become the fourth worst-hit nation by the COVID-19 pandemic, according to the Worldometer.

Of the 396 new deaths reported till Friday morning, 152 were in Maharashtra, 101 in Delhi, 38 in Gujarat, 24 in Uttar Pradesh, 23 in Tamil Nadu, 12 in Haryana, 10 in West Bengal, nine in Telangana, six in Rajasthan, four each in Madhya Pradesh and Punjab, three each in Bihar and Karnataka, two each in Andhra Pradesh, Assam and Puducherry and one in Jammu and Kashmir. 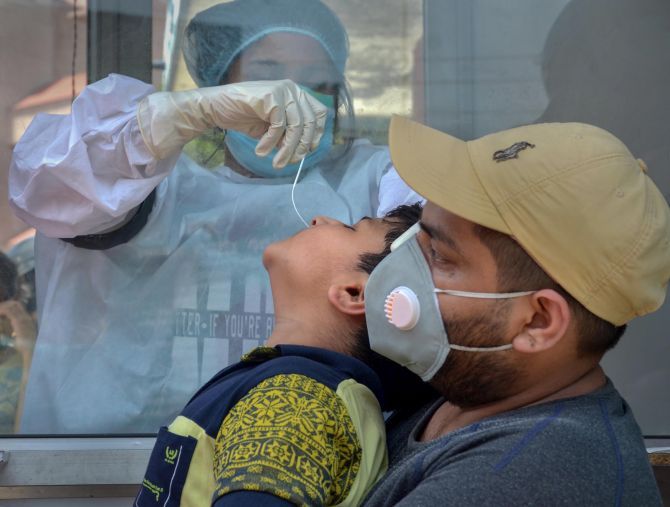 IMAGE: A medic collects samples from a child for COVID-19 swab tests at Civil Hospital, during the ongoing nationwide lockdown, in Amritsar. Photograph: PTI Photo

Jammu and Kashmir has reported 52 fatalities due to the coronavirus disease, while 36 deaths have been reported from Bihar, 18 from Kerala, 15 from Uttarakhand, nine from Odisha and eight from Jharkhand.

Chhattisgarh, Assam and Himachal Pradesh have registered six COVID-19 fatalities each, Chandigarh has five, Puducherry has two, while Meghalaya, Tripura and Ladakh have reported one COVID-19 fatality each, according to ministry data. 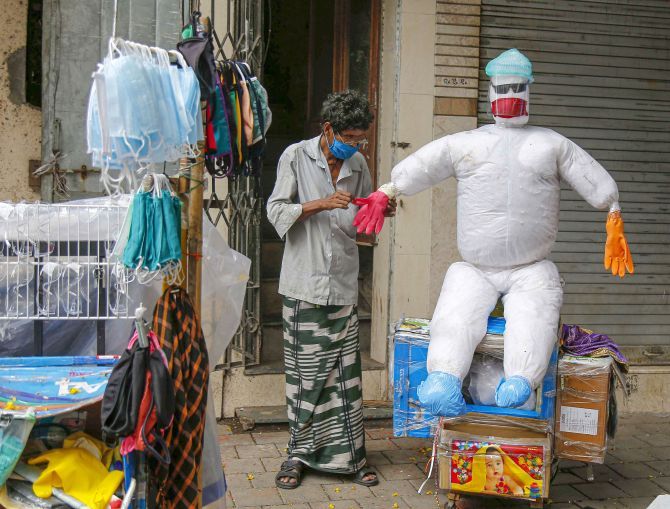 IMAGE: A vendor stands next to a mannequin wearing gloves and masks at Kalbadevi, during the ongoing COVID-19 lockdown, in Mumbai. Photograph: PTI Photo

Assam has reported 3,319 novel coronavirus cases so far while Punjab has 2,887 cases. A total of 2,244 people have been infected by the virus in Kerala and 1,643 in Uttarakhand.

Puducherry has 157 COVID-19 cases, Ladakh has 135, Nagaland has 128, Mizoram has 102, Arunachal Pradesh has 61, Meghalaya 44 while Andaman and Nicobar Islands has registered 38 infections so far.

Sikkim has reported 14 cases, while Dadar and Nagar Haveli and Daman and Diu together have reported 30 infections.

The ministry's website said that 8,315 cases are being reassigned to states and "our figures are being reconciled with the ICMR".