Massive crowds thronged liquor stores, more vehicles plied on roads and cab-hailing platforms resumed services as India entered the third phase of the lockdown on Monday with further easing of curbs except in containment zones in the shadow of the highest rate of recovery yet from coronavirus. 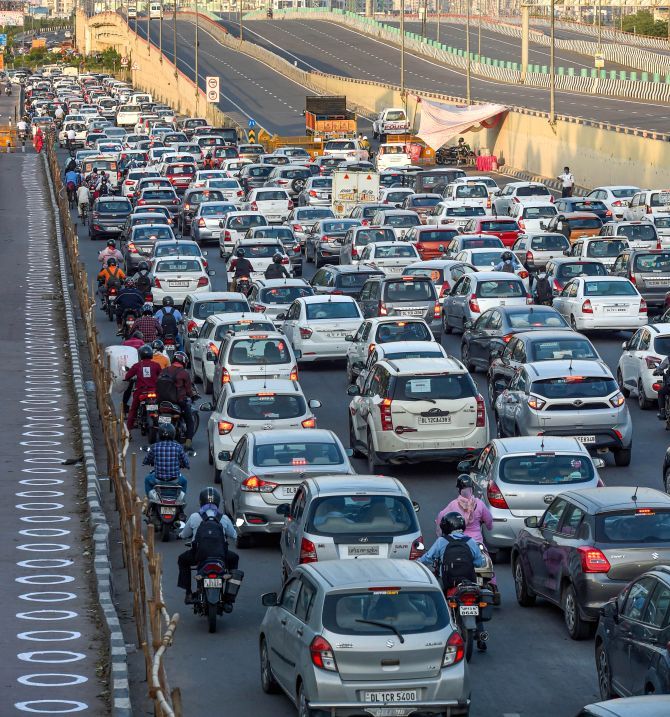 IMAGE: raffic jam near Ghazipur following the relaxation of restrictions during the nationwide lockdown, imposed to curb the spread of coronavirus, in New Delhi. Photograph: Atul Yadav/PTI Photo

As government seeks to balance between curbing COVID-19 and reviving the battered economy, several manufacturing companies, ranging from auto to textiles, breweries to chemical and fertilisers resumed manufacturing operations after getting permission from the respective state governments.

The manufacturers have informed stock exchanges about partial resumption of their facilities with adherence to safety protocols as mandated by the government and local authorities.

The Union home ministry also asked states and union territories to ensure seamless inter-state truck and goods carrier movement, saying it is necessary for supply of essentials and to keep the wheels of the economy moving during the lockdown.

The communication by the Centre came as the apex transporters' body All India Motor Transport Congress urged the Centre to ensure hassle-free movement of truckers carrying goods.

The AIMTC said that while hardly 30 per cent of trucks are on the roads, reports are pouring in about harassment of drivers, including extortion at border points in some states.

As the Railways operated 'Shramik Special' trains for the fourth day, officials in Gujarat said over 1,000 migrant workers appearing impatient to return to their native places pelted stones at the police in Surat district leaving nearly a dozen personnel injured, one of them a IG-level IPS officer, and also held protests elsewhere in the state. 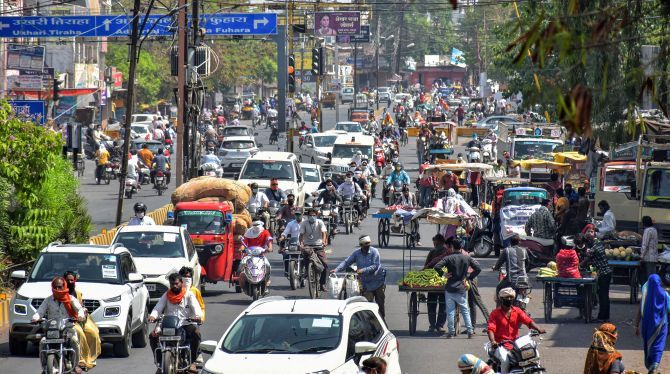 IMAGE: Vehicles ply on Baldevbagh road after authorities eased restrictions, during the ongoing nationwide lockdown to curb the spread of coronavirus, in Jabalpur. Photograph: PTI Photo

Construction activities resumed in some real estate projects in Gurugram with existing labour force, but builders in Noida and Greater Noida are waiting for permission from the local administration, according to industry bodies.

However, industry associations CREDAI and NAREDCO said it would be difficult to carry out construction works in full capacity and speed because of shortages of labourers, raw materials and cash.

As states took measured steps to ease the curbs, the Jharkhand government said it will not implement any of the relaxations granted by the Centre and has decided to extend "total" lockdown in the mineral-rich state for two more weeks till May 17.

More relaxations have been granted by the Centre in the third phase of the lockdown in the districts classified as Green, Orange and Red zones depending on the exposure to COVID-19. There have been two extensions to the lockdown which was imposed on March 25 to try halt the spread of the virus.

With restrictions on public transport like Metro Rail and city buses continuing, the usually crowded places had a very less footfall in several cities.

After the restrictions were lifted, heavy vehicular movement was witnessed in parts of Bengaluru leading to a traffic jam in some areas.

Chikpet, which is the main trade area in Bengaluru, saw some activities. 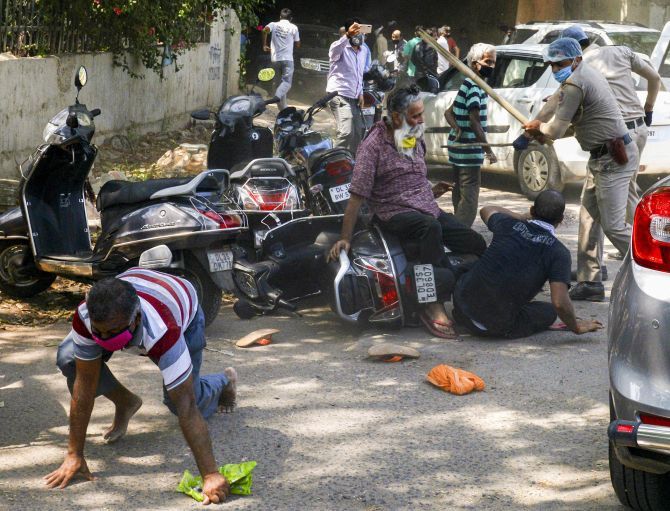 IMAGE: A policeman raises his baton to manage the crowd outside a wine shop after authorities permitted sale of liquor with certain restrictions, during the ongoing COVID-19 nationwide lockdown, in New Delhi. Photograph: PTI Photo

Traffic jams were also reported in some parts of Delhi.

In the national capital, many government-run liquor shops which opened after 40 days had to be shut as people who gathered outside the outlets did not follow social distancing norms, forcing the police to use mild force to disperse the unruly crowd.

Tipplers queued up in large numbers since morning at liquor shops -- a common sight in large parts of the country where they reopened as anxious people formed more than a kilometre long queue in several areas.

"Shops were asked to shut in places where social distancing norms were violated. At some places, mild force was also used to disperse the crowd," said a senior Delhi police official.

Union Health Minister Harsh Vardhan said the Delhi government rushed into opening liquor shops at a time when the national capital was still in the 'red zone', adding it should review its decision in view of huge crowds outside these outlets which increased the risk of spread of COVID-19.

In some places in Karnataka, people made a beeline to liquor shops even before day-break and performed "special prayers" with flowers, coconuts, incense sticks and camphor and burst crackers in front of the stores. An elderly woman identified as only Dakamma and stated to be aged 96 years was one among the crowd in Shivamogga waiting to get some liquor. 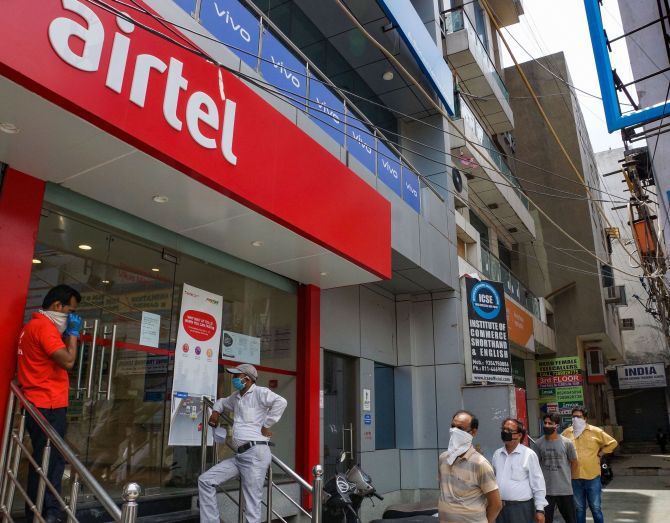 IMAGE: Customers maintain social distance as they stand in a queue outside a shop after authorities allowed shops to open with certain restrictions, during the ongoing COVID-19 nationwide lockdown, at Laxmi Nagar in East Delhi. Photograph: Kamal Kishore/PTI Photo

Stand-alone liquor shops in West Bengal reopened in the three zones but the police closed down several of them within an hour as people started jostling with each other in front of the outlets with social distancing going for a toss.

As per the guidelines of the MHA, liquor stores and 'paan' shops will be allowed to function in all the three zones except in containment areas while ensuring a minimum six feet distance ('2 gaz ki doori') from each other and ensuring that not more than five persons are present at one time at the shop.

As the country witnessed a daily rise of over 2,000 COVID-19 cases for the past three days to record a highest ever 24-hour spike of 2,553 infections, the Centre said the recovery rate stands at 27.52 per cent with 11,706 patients having recovered till now.

A total of 1,074 COVID-19 patients have recovered, the highest number of recoveries in one day, Lav Agarwal, a joint secretary in the union health ministry, told reporters.

The outcome ratio of COVID-19 -- the ratio of recoveries and deaths of closed cases -- was recorded at 90:10, the health ministry said.

"The outcome ratio on April 17 was 80:20 and the new ratio can be seen as an improvement," Agarwal said.

Agarwal also said the COVID-19 curve is relatively flat as of now and it was not right to talk in terms of when the peak would come. "If we collectively work then peak might not ever come while if we fail in any way we might experience a spike in cases," he added. 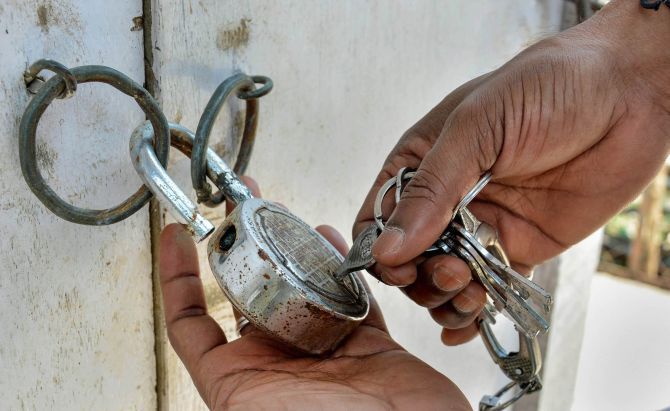 IMAGE: A shopkeeper unlocks the door of his shop after the Assam government announced relaxation in the COVID-19 lockdown, in Guwahati. Photograph: PTI Photo

Cab-hailing platforms Ola and Uber said they have resumed services in areas within the Orange and Green Zones, and have introduced requirements like wearing masks to ensure
safety of riders and driver partners.

In a statement, Ola said it has resumed operations in over 100 cities adhering to the government guidelines.

According to reports from states, people rushed to markets posing a challenge for the authorities to maintain social distancing.

In Haryana, Bhiwani's Circular Road witnessed a long queue outside a bank and an elderly man complained that social distancing was not being maintained.

In Assam, most of the outlets in the high-street areas kept their shutters down due to the numbering system that allows only one-third of the shops in a row to open on a particular day.

Besides Surat, several labourers also came out on the roads in Rajkot demanding they be sent back to their home towns.

Police personnel lobbed teargas shells and baton-charged agitated workers from Uttar Pradesh, who pelted stones on them near Vareli village on the outskirts of Surat, an official said.

Besides Inspector General (Surat Range) S Pandian Rajkumar, at least 10 policemen were injured in the stone pelting, police said, A total of 80 people have been
detained,police said.