India reported 50 fresh cases of coronavirus, highest in a day, taking the tally to 223 on Friday, as Prime Minister Narendra Modi discussed with chief ministers ways and preparedness of the states to check and prevent the spread of coronavirus, which has claimed more than 10,000 lives globally. 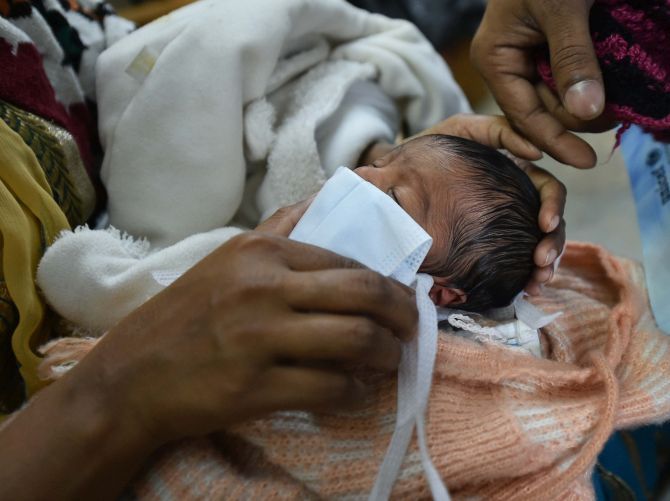 IMAGE: A family member puts a protective mask on a new-born baby in the wake of coronavirus pandemic, before being weighed at Hailate Hospital, in Kanpur. Photograph: Arun Sharma/PTI Photo

A spike in numbers prompted the states and Union Territories to reinforce its efforts to contain the spread. While the Maharashtra chief minister said all workplaces in major cities, including in country's commercial hub Mumbai and Pune, will remain closed till March 31, the Delhi chief minister announced shutting down of all malls in the national capital, but exempted grocery stores and pharmacies in them.

As coronavirus continued its upward trajectory across the country, authorities faced double-barrel challenge -- strengthening its check and prevention mechanism, and addressing public panic, leading to hoarding of essential items. 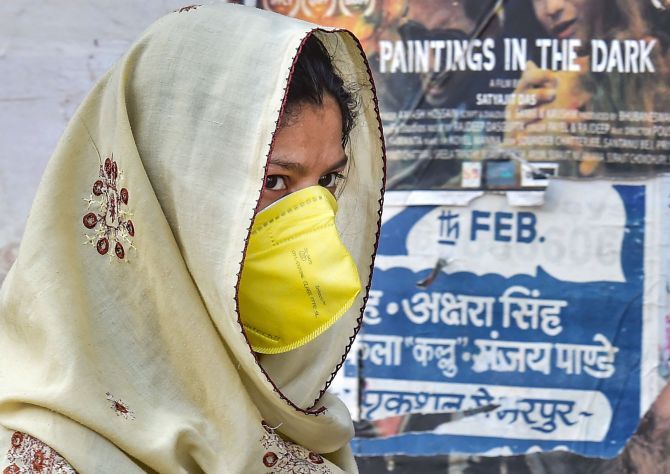 IMAGE: A woman wearing protective masks in the wake of coronavirus pandemic walks on a city street in Kolkata. Photograph: Swapan Mahapatra/PTI Photo

Despite appeals by leaders not to panic and not to hoard items, long lines were seen at grocery stores, pharmacies and outlets selling other essential stuff, throwing the caution of 'social distancing' to the wind.

Many in public dealing, including traders, responded to Modi's call for a 'janata curfew' on Sunday, saying they will shut their establishments while a number of people opted for self-isolation as a precaution.

According to sources, no passenger trains will ply from 00:00 hours till 10 pm on Sunday while all suburban train services to be reduced to a bare minimum during 'janata curfew'.

Among those found positive for the novel coronavirus are 32 foreign nationals, including 17 from Italy, three from the Philippines, two from the UK, one each belonging to Canada, Indonesia and Singapore. "The total number of active COVID 2019 cases across India stands at 196 so far," the Union health ministry said, adding that 23 others have been cured/discharged/migrated while four have died.

Meanwhile, a 69-year-old Italian tourist who had "recovered" from the novel coronavirus died at a private hospital in Jaipur after suffering a massive cardiac arrest late on Thursday night, SMS Medical College principal Sudhir Bhandari said.

Delhi has, so far, reported 17 positive cases which included one foreigner, while Uttar Pradesh has recorded 23 cases, including one foreigner. 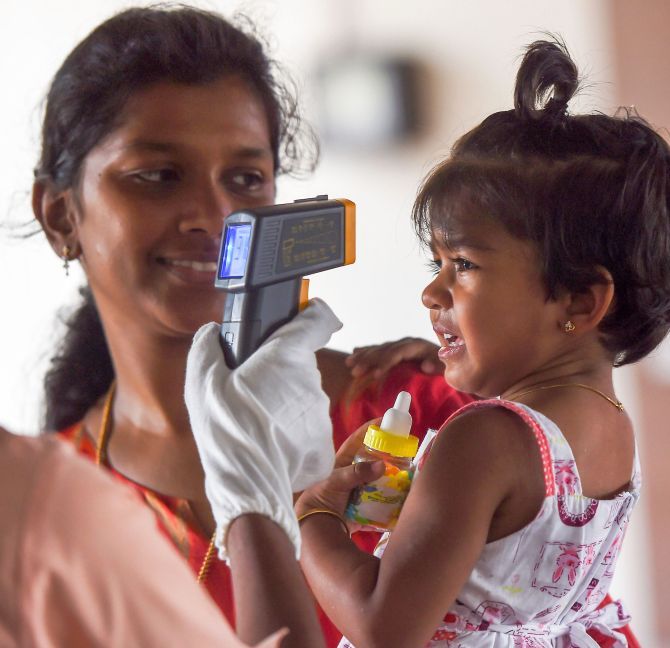 IMAGE: Passengers being screened at a metro station in Chennai. Photograph: PTI Photo

Maharashtra has 52 cases, including three foreigners, while Kerala has recorded 28 cases which included two foreign nationals.

Karnataka has 15 coronavirus patients. The number of cases in Ladakh rose to 10 and Jammu and Kashmir four. Telangana has reported 17 cases which included nine foreigners.

Prohibitory orders under Section 144 of the CrPC were also imposed in Rajasthan's Bhilwara district from Friday after a doctor at a private hospital was tested positive for COVID-19.

While Tamil Nadu and Andhara Pradesh have reported three cases each, there are 17 cases, including 14 foreigners in Haryana.

Odisha has two cases while Uttarakhand has three so far.

West Bengal and Punjab reported two cases each while Pondicherry and Chandigarh and Punjab have reported one case each. 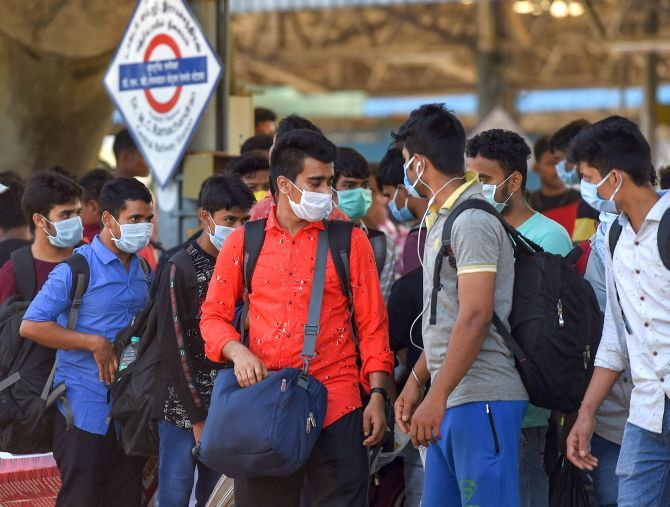 A day after he addressed the nation on coronavirus during which he asked people to remain indoors and only come out if it was extremely necessary, Modi held a video call with chief ministers and discussed ways to check the spread of the virus.

Issues such as capacity building of the states and extending training to local health officials were also discussed in the call which was among others attended by chief ministers of Punjab Amrinder Singh, Maharashtra Uddhav Thackeray, Uttar Pradesh Yogi Adityanath, sources said.

The prime minister has been pitching for involvement of people and local authorities to check the spread of the virus. 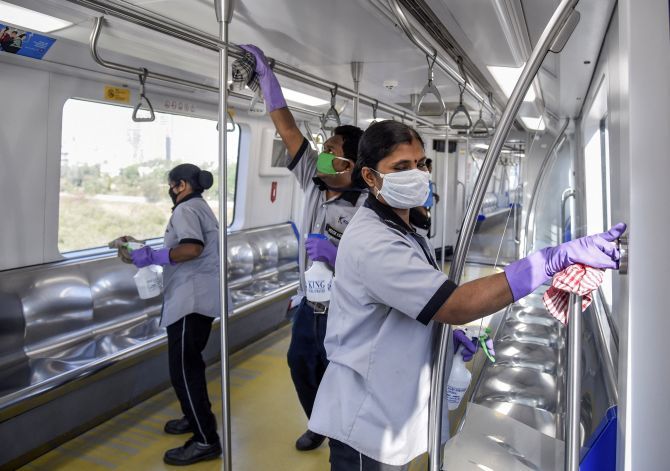 Meanwhile, former Rajasthan chief minister Vasundhara Raje announced that she and her son BJP MP Dushyant Singh have gone into self-quarantine after attending a party where singer Kanika Kapoor was also present. Kapoor has become the first Bollywood celebrity to test positive for COVID-19.

Several members of Parliament including Trinamool Congress's Derek O'Brien and Apna Dal MP Anupriya Patel also went into self-quarantine after they got to know about Singh.

"This government is putting all of us at risk. The prime minister says self isolate yourself but Parliament is on. I was sitting next to Dushyant the other day for two-and-a-half hours. There are two more MPs who are in self isolation. The session should be deferred," the TMC MP said.

Many MPs also attended a breakfast meeting hosted by President Ram Nath Kovind on March 18, which was attended by Singh, who also participated a Parliamentary panel meeting on Wednesday on transport tourism and culture where 20 MPs were also present.

The Uttarakhand government banned the entry of domestic and foreign tourists into the state till further orders to contain the spread of coronavirus. Uttarakhand is the second state to do so after Sikkim.

With a Punjab woman, who had tested positive for the coronavirus, fleeing from the hospital and subsequently booked for doing so, Union minister G Kishan Reddy urged family members to not resist the government move to test and quarantine people returning from countries battling coronavirus.