With a tagline "Congress Will Deliver", Rahul Gandhi on Tuesday released his party's manifesto for Lok Sabha polls, making jobs creation, addressing farm distress, bringing a single moderate rate of GST and giving Rs 72,000 per annum to poor families as key focus if the party comes to power. 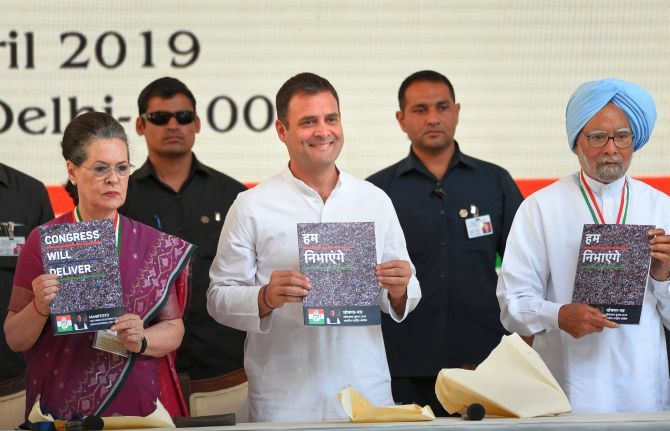 In the 55-page document, the Congress also promised to come out with separate budget for farmers, fill up 22 lakh government vacancies, allocate 6 per cent of GDP to education, assured 50 more days of guaranteed jobs from current 100 under the MNREGA, boosting healthcare infrastructure and enhance safety of women.

"When we started a year ago, I made it clear that nothing in this can be a lie, because we live in a time where we hear a large number of lies every day," Gandhi said, after releasing the manifesto in the presence of former prime minister Manmohan Singh, United Progressive Alliance chairperson Sonia Gandhi and senior party leader P Chidambaram.

The document, titled 'Hum Nibhayenge', touched upon a range of key issues including national security, situation in Jammu and Kashmir and in the North Eastern region, foreign policy, defence, state of the rural economy, current tax regime and environmental challenges among others.

Referring to Jammu and Kashmir, Congress promised to review the Armed Forces Special Powers Act as well as deployment of the armed forces, asserting that nothing will be done or allowed to change the constitutional position relating to the border state.

"Congress promises the people of J-K talks without pre-conditions. We will appoint the interlocutors drawn from civil society to facilitate such talks," according to the manifesto. 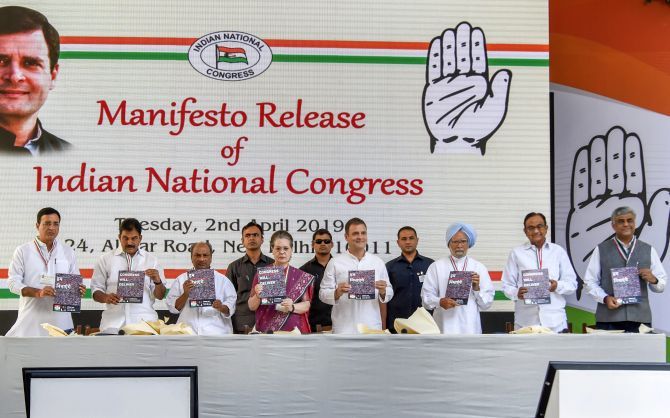 In another key promises, the party said it will abolish the provision of sedition in the IPC, scrap the "opaque electoral bonds" introduced by the National Democratic Alliance government, replace the Niti Ayog with a modern Planning Commission and enact an anti-hate crime law to deal with incidents of lynchings.

The party also pledged to make defamation a civil offence, change law that allows detention without trial and proposed to set up a national judicial commission to appoint judges.

The party said, in place of the electoral bond, a National Election Fund will be set up to financially help recognised political parties.

On GST tax, the Congress said it will radically simplify the GST regime with a single moderate rate of tax, zero rating of exports, and exemption for essential goods and services, adding panchayats and municipalities will be given a share of the revenues. For farmers, Congress promised to put them on the path from "Karz Maafi" (loan waiver), to "Karz Mukti" (freedom from loans).

This will be done through remunerative prices, lower input costs, and assured access to institutional credit, the party said adding it will present a separate "Kisan Budget" every year, if voted to power.

Speaking on the occasion at the Congress headquarters, Gandhi said Congress will allocate 6 per cent of GDP to education, will strengthen government hospitals and give high-quality healthcare access to poor, if voted to power.

WATCH: Will provide 150 days employment instead of 100 under MGNREGA: Rahul

The party also promised to enact the Right to Healthcare Act and guarantee every citizen free diagnostics, out-patient care, free medicines and hospitalisation, through a network of public hospitals and enlisted private hospitals.

"Our manifesto process reflects our commitment to a higher vision, that of listening to the Jan Awaaz. It is not the 'mann ki baat' of one individual but the collective voice of lakhs of people," he said in a preface of the manifesto.

With this manifesto, Gandhi said the Congress has offered to people "the only national alternative -- a distinct alternative that is unwavering in its commitment to truth, freedom, dignity, self-respect and prosperity for our people."

He promised to make India "strong and united, and a just and prosperous society."

On the party's showpiece minimum income guarantee scheme or Nyuntam Aay Yojana, the party's manifesto promised to give Rs 72,000 per year to the poorest 20 per cent households in India. 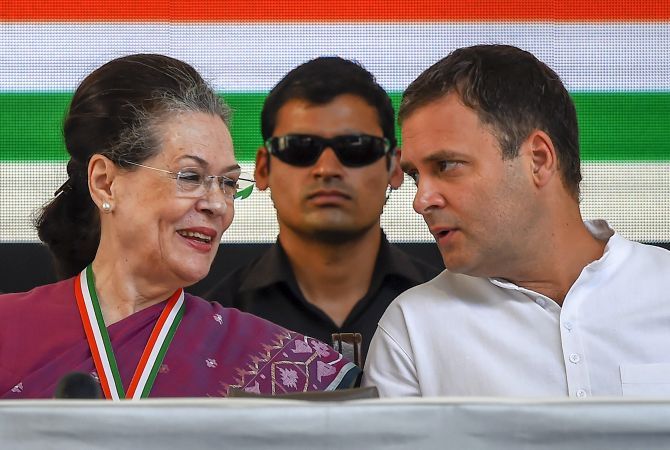 To the youth of India, Congress pledged to make jobs its top priority, saying it will ensure 34 lakh jobs in the public sector by filling all 4 lakh central government vacancies before March 2020, persuading the state governments to fill 20 lakh vacancies and creating an estimated 10 lakh new Seva Mitra positions in every gram panchayat and urban local bodies.

Armed Forces and Paramilitary Forces Congress will reverse the trend of declining defence spending under the NDA government, and increase it to meet the requirements of the Armed Forces.

"We will expedite all modernisation programmes of the Armed Forces in a transparent manner. We will improve social security, education and health facilities for our Paramilitary Forces and families," the party said.

On education, Congress promised that school education from Class I to Class XII in public schools shall be compulsory and free.

The party promised to pass in the first session of the 17th Lok Sabha the Women's Reservation Bill reserving 33 percent of seats for women in the Lok Sabha and the State Legislative Assemblies. "Congress will also reserve 33 percent of all posts/vacancies in the Central government for women."

The party also promised to "revitalise" institutions like Reserve Bank of India, Election Commission, Central Bureau of Investigation, Central Information Commission, saying Congress will restore their dignity, authority and autonomy while making them accountable to Parliament.