Massive victory for Congress in Chhattisgarh

The opposition Congress is headed for a massive victory in Chhattisgarh, bagging 45 seats and leading in 23 constituencies in the 90-member assembly in the state. IMAGE: Congress workers celebrate the party's good show in the assembly elections at the party office in Raipur, on Tuesday. Photograph: PTI Photo

As per the latest trends, the Bharatiya Janata Party clinched only 10 seats and was leading in five others.

While the Janata Congress Chhattisgarh (J) of former chief minister Ajit Jogi won two seats and was ahead in three, its ally Bahujan Samaj Party clinched one seat and was leading in another constituency.

In an embarrassment to the ruling party, two of its sitting ministers lost and six were trailing.

However, BJP minister Ajay Chandrakar managed to retain his Kurud seat by defeating an independent candidate Neelam Chandrakar by 12,317 votes.

Chief Minister Raman Singh was leading in Rajnandgaon seat by a margin of 16,445 votes against his nearest rival Karuna Shukla of the Congress.

State presidents of the BJP Dharamlal Kaushik and Congress Bhupesh Baghel were leading from Bilha and Patan seats respectively.

While Ajit Jogi won Marwahi seat, his wife Renu Jogi was leading in Kota.
The voting was held in two phases on November 12 and 20 to elect a new 90-member assembly. A total of 1,269 contestants, including 133 women, were in the fray.

In the 2013 assembly polls, the BJP had won 49, the Congress 39, while one seat each was bagged by the BSP and an independent.

Of the 90 assembly segments, 51 are for general category and 10 segments are reserved for Scheduled Castes and 29 for Scheduled Tribes. 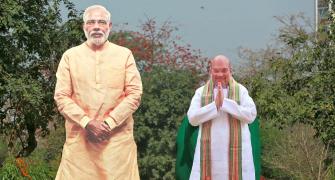 'This defeat is that of Amit Shah, Modi, Raman Singh'
'Mandir had no impact in Chhattisgarh' 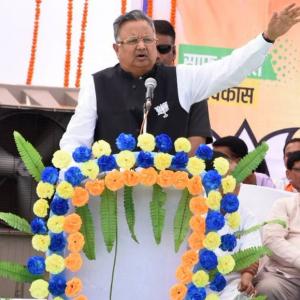