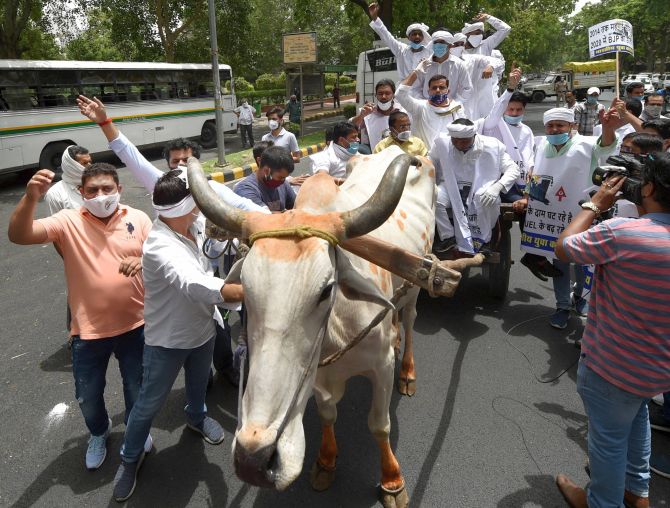 IMAGE: Indian Youth Congress workers riding on a bullock cart stage a protest against the Central Government over hike in the prices of petrol and diesel, outside Shastri Bhawan in New Delhi. Photograph: Manvender Vashist/PTI Photo

In New Delhi, state Congress president Anil Kumar and party workers were detained by police at a petrol pump near Parmanand hospital.

Kumar said police detained him and party workers as they tried to go to Raj Niwas, which is Delhi Lieutenant Governor Anil Baijal's official residence, to lodge their protest against the rising prices of petrol and diesel. 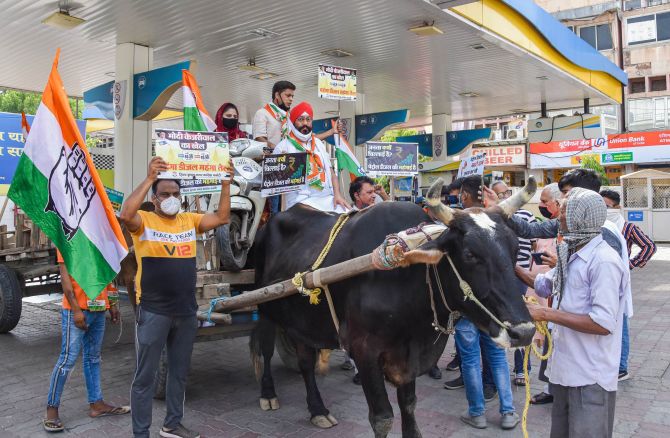 IMAGE: Congress workers ride a bullock cart as they protest against price hike of petrol and diesel, at a Petrol Pump in east Delhi, on Monday. Photograph: PTI Photo

Police said they were detained around 10 am and would be released soon. 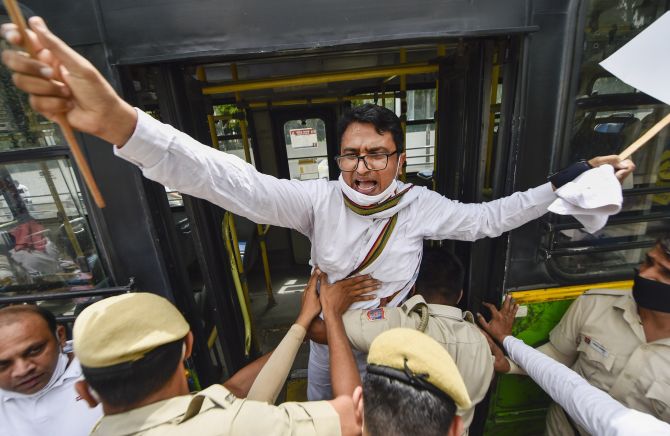 Protesting against the fuel price hike, the Delhi Congress chief, said, "People are already suffering from coronavirus and consequences of lockdown. At such a time, the rise in prices of petrol and diesel by the Modi government and Kejriwal government in Delhi is adding to their woes." 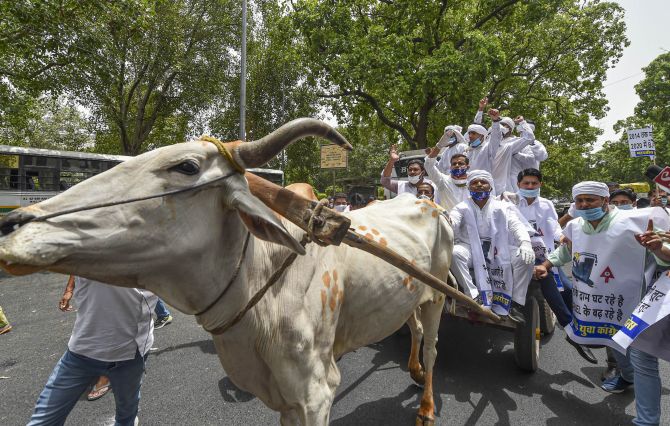 In Patna, Congress workers rode bicycles, bullock carts and horse carts to protest against the increase in fuel prices.

The protesters raised slogans against Prime Minister Narendra Modi-led government during the demonstration. 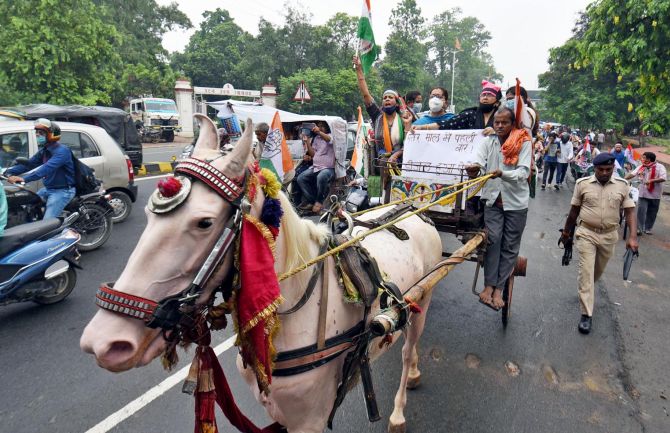 "The fuel prices are rising almost every day. The country is already dealing with so many crises; the public should be given relief in such a situation. The government is trying to torture the public in different ways," said Madan Mohan Jha, Congress chief in Bihar.

In Gujarat, state Congress president Amit Chavda and nearly 50 other party workers were detained in Ahmedabad while they were trying to take out a rally, police said. They were not given permission for such a gathering, a senior police official said.

The opposition party also organised similar protests in Rajkot, Vadodara and Surat districts of Gujarat and demanded roll back of the hike. 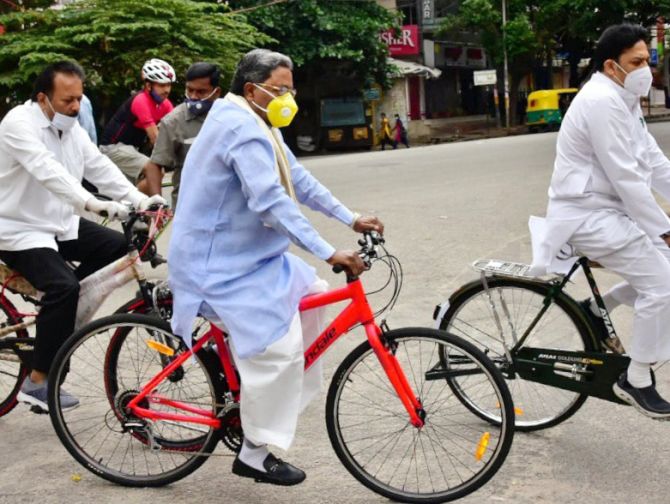 In Ahmedabad, Chavda and 50 other Congress workers, including MLA Gyasuddin Shaikh, were detained near Sardar Baug area while trying to take out a rally against the increased prices of petrol and diesel.

Police said the demonstrators were not given permission for such a gathering or for taking out a rally.

"The Congress workers gathered in a busy area without any permission. We have detained nearly 50 protesters, including Chavda and Shaikh, for holding protests and trying to take out a rally without permission," Deputy Commissioner of Police, Zone 2, Dharmendra Sharma said. 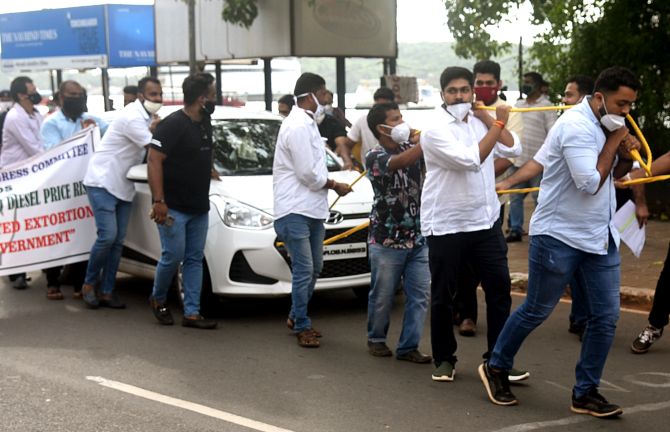 Before being detained, Chavda slammed the government over the fuel price hike and denying permission for the protest.

"This government is not ready to understand the plight of the people, who were first hit by coronavirus and now by fuel price hike. We will continue to raise the issues concerning citizens, who were literally abandoned by this government. We want the Centre to roll back the hike," Chavda told reporters before his detention.

Congress workers in other parts of the state were also detained for holding protests over the issue, officials said. 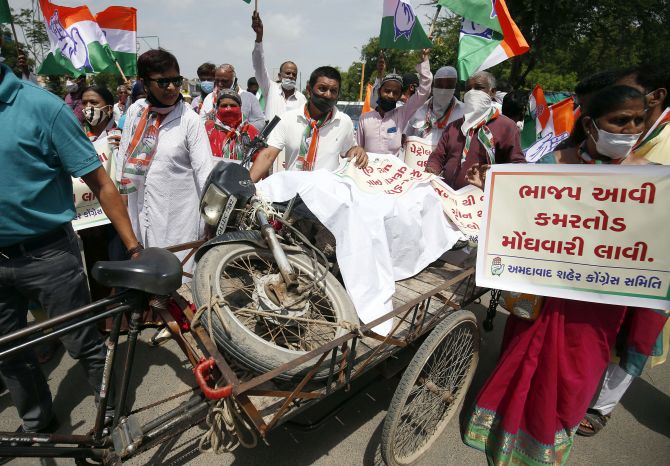 IMAGE: Supporters of Congress load a motorcycle on a rickshaw as they protest against fuel price hike, in Ahmedabad. Photograph: ANI Photo

In Karnataka, Congress leader and former chief minister Siddaramaiah rode a bicycle in Bengaluru, from his residence to reach Minsk Square, to participate in the party's protest against the hike in fuel prices.

The Maharashtra Congress also staged protests across the state on Monday against the increase in fuel prices, and demanded roll back of the hike.

A senior party leader said people were already hit hard by the coronavirus-induced lockdown, hence at such a time the Centre should reduce the fuel prices. 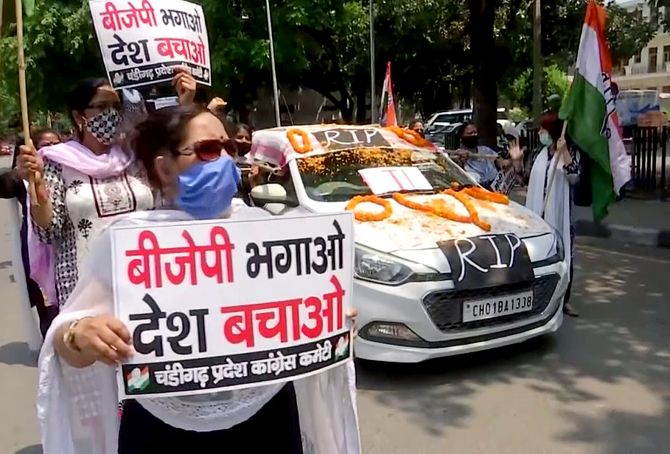 Several Congress ministers, including Balasaheb Thorat, Ashok Chavan and Nitin Raut, staged a protest at the party office in Mumbai.

"The petrol and diesel prices have been increased by the Centre in last some days. The prices should be slashed as people are already affected by the lockdown," said Thorat, who is the Maharashtra Congress president and the state revenue minister.

Besides, state minister Satej Patil staged a protest against the fuel price hike in Kolhapur. IMAGE: Left Front and Congress workers lay down their bikes on a road and shout slogans during a protest at Bolpur town in Birbhum district of West Bengal. Photograph: PTI Photo

Diesel price on Monday scaled a new high after prices were hiked for the 22nd time in just over three weeks, taking the cumulative increase to Rs 11.14 per litre.

Petrol price was increased by 5 paise per litre and diesel 13 paise a litre across the country, according to a price notification of state oil marketing companies.