News
Business
Movies
Sports
Cricket
Get Ahead
Money Tips
Shopping
Sign in  |  Create a Rediffmail account
Rediff.com  » News » What do kids miss most during lockdown? They reveal through art

What do kids miss most during lockdown? They reveal through art

Missing their grandparents, not being able to go out and meet their friends....

These are just some of the things that kids, who have been confined to their homes due to the coronavirus lockdown, have revealed.

From Tokyo to Buenos Aires, and New York to Kathmandu, youngsters have taken to their balconies or front lawns to display and explain the drawings they have made to Reuters photographers. 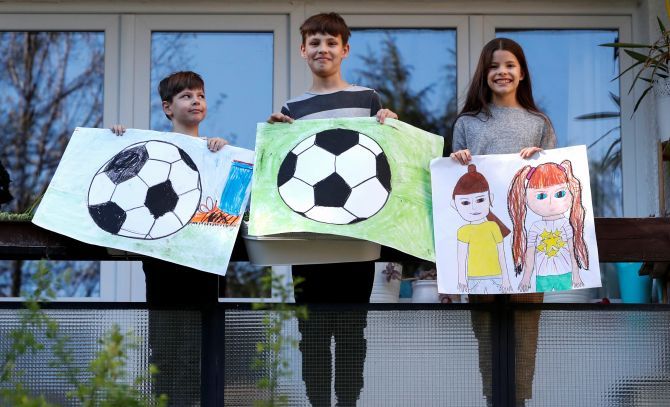 Ivan Posta, 8, Vince Posta, 11, and Vilma Posta, pose for a photograph while holding pictures that they drew during the Coronavirus disease outbreak, while standing on the balcony at their home in Budapest, Hungary. Ivan drew a soccer ball, "because, I like to play football with friends." Vince also drew a soccer ball "because we can't play football in the garden as there are trees and bushes everywhere." Vilma drew her friends and said she missed her friends the most. "I'm fine, only teachers give too many lessons," she added. Photograph: Bernadett Szabo/Reuters 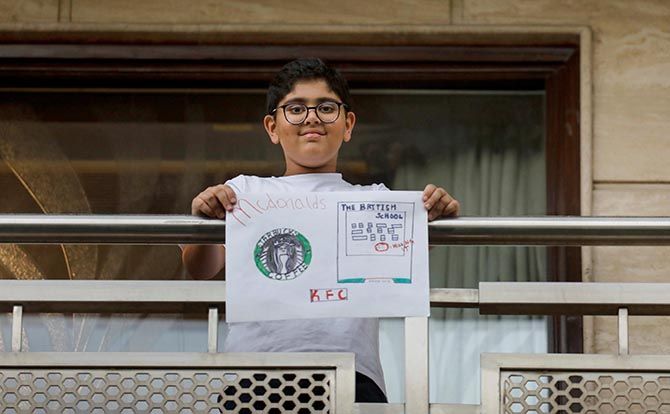 Shaurya Pratap Singh, 10, stands on the balcony at his home in New Delhi. "What I miss the most (about) the life before lockdown was just basically meeting people because I have a good communication with people. I like restaurants, malls. They were all filled with people. So basically I just miss that. So weird seeing a different India right now because of coronavirus," Shaurya said. "What I drew basically was all my favorite restaurants -- Starbucks, KFC, McDonald's and I drew my school because mostly they are four most important things except my friends also," he added. "You can't go out of your house but it's like a challenge which we have to overcome. It's like a once in a lifetime thing and we have to battle it and handle it." Photograph: Anushree Fadnavis/Reuters 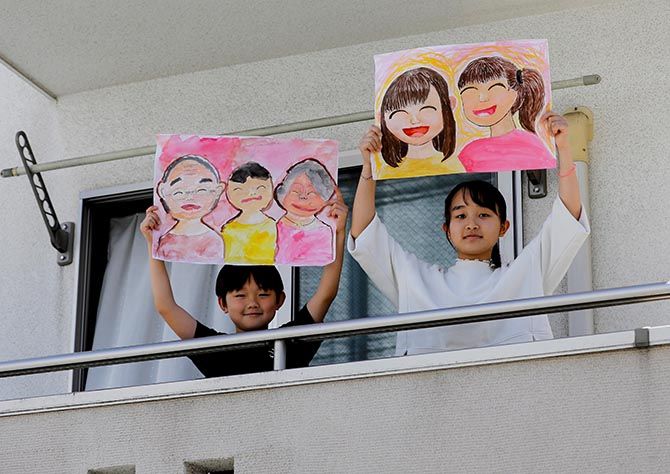 Reku Matsui, 8, and Yaya Matsui, 12, pose for a photograph while holding pictures that they drew in Tokyo, Japan. "I miss being with my grandmother and my grandfather. Also, I want to go to my grandmother's house," said Reku, who drew a picture of himself standing in between his two smiling grandparents. Yaya, who drew a picture of herself and a friend said "what I want to do the most right now is hang out with my friends." Photograph: Kim Kyung-Hoon/Reuters 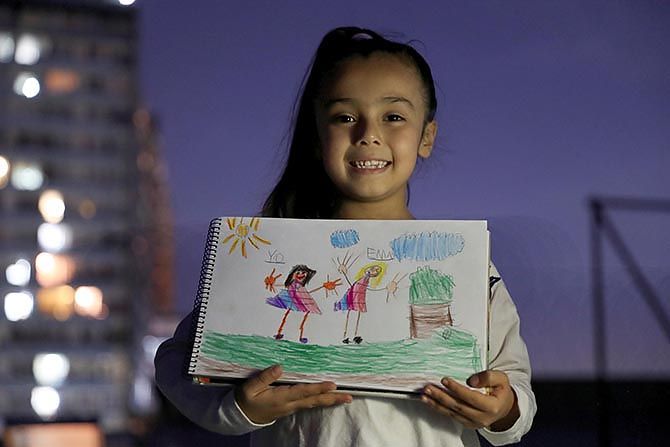 Matilda Soto Quilenan, 6 from Santiago, Chile drew herself and her friend Ema from school, who she said she misses a lot. "I miss going to the park, eating ice cream and riding my scooter," Matilda said. "I've felt sad because I can't go out to play... When I get bored, I occupy my imagination to draw, I can be an artist... I'm happy with that. But sometimes I get angry because the drawings come out too ugly." Photograph: Ivan Alvarado/Reuters 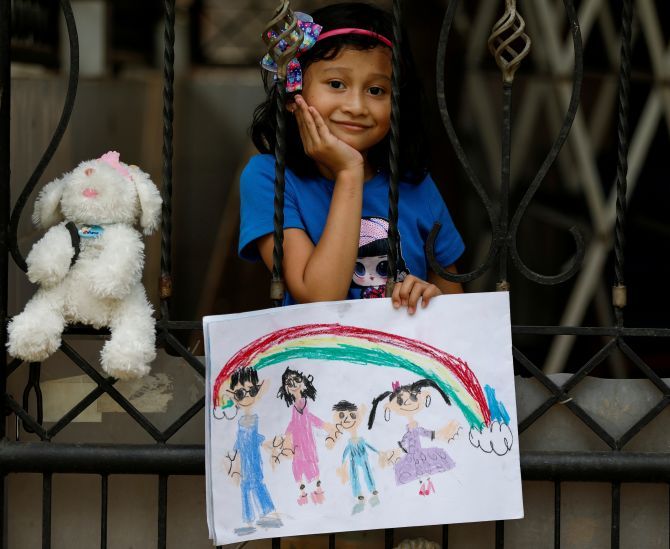 Jemima Christa-Faelist Tanamal stands by her grandparents house in Bekasi, Indonesia. Jemima drew herself and her little brother going for a picnic with their grandparents. "I don't like to stay at home, boring," said Jemima. "Once I can go outside, I will go to the mini-market for bubble gum first. I like to go to school, because I can play together with my friends. I will hug my friends and teachers when I go back to school later and say 'I miss you teacher, I miss you friend' to them." Photograph: Willy Kurniawan/Reuters 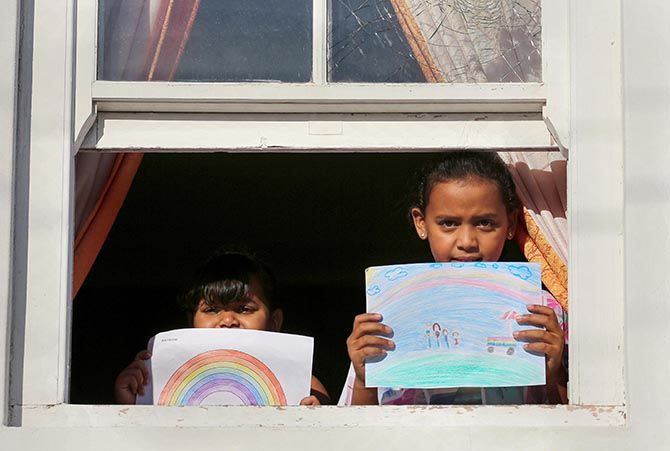 Bashierah Moos, 5, and Hanaa Moos, 9, stand by a window at their house in Cape Town, South Africa. Bashierah drew a picture of a rainbow and Hanaa said, "I drew my family next to an ice-cream truck because I miss, I miss going out." She added "I feel sad because I can't see my friends and go to school." Photograph: Sumaya Hisham/Reuters 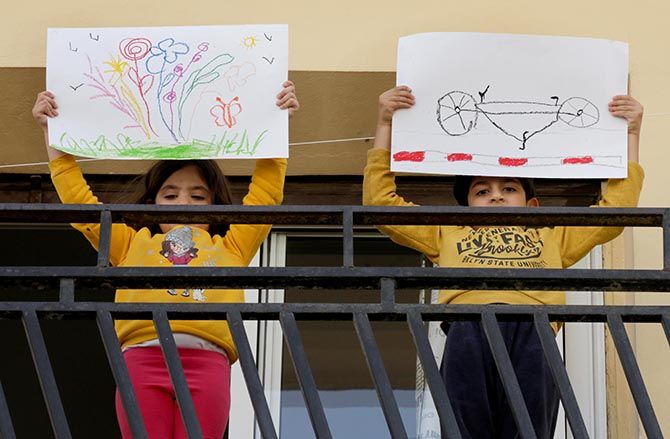 Youssef, 6, and Myriam 4, pose for a photograph while holding pictures that they drew during the COVID-19 outbreak, as they stand on the balcony of their apartment in Casablanca, Morocco. "I drew a bicycle because I miss to ride it on the street," said Youssef. Photograph: Youssef Boudlal/Reuters 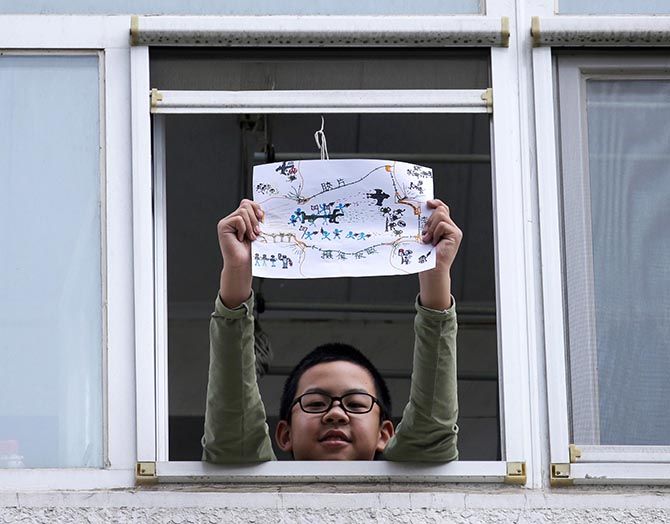 Eleven-year-old Li Congchen stands by a window at his grandparent's home in Beijing, China. "In first frame here, it shows that viruses are landing on from a bat aircraft and they are terrifying human beings. The second frame is the viruses are beating humans on a street. The third frame shows a scientist who invented an impressive weapon aiming at destroying those viruses. The fourth frame tells that human volunteers formed up a dare-to-die squad. The last frame in the middle shows that human beings have defeated and diminished the viruses with vaccine guns." said Li. "I feel that sometimes it?s quite difficult to go out. I?m getting more online courses. But in general, days at home is not that bad because I can eat ice cream." Photograph: Tingshu Wang/Reuters 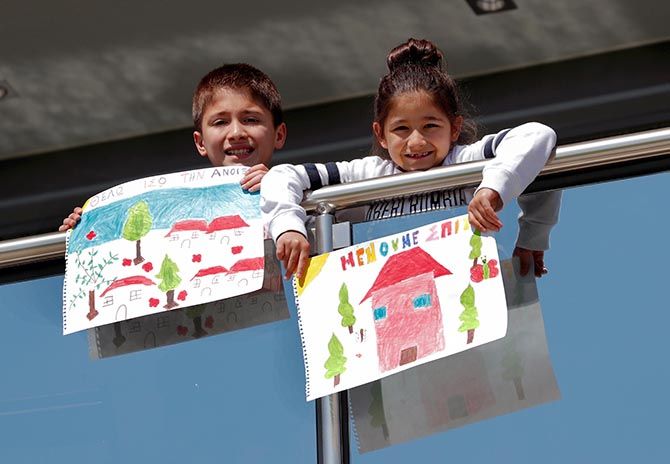 Vasilis Bekiaris, 10, and Aggeliki Bekiaris, 7, stand on the balcony of their home in Thessaloniki, Greece, April 18, 2020. The writings in Greek in the drawings read: "I want spring back" and "We stay home" which is the national slogan of Greece against coronavirus disease outbreak. Vasilis who said he drew spring, said: "I miss my friends and I want it to end." Aggeliki who drew a house, said: "We stay at home because of the coronavirus. I miss my friends and my teachers." The siblings say they spent their time at home by playing with toys, doing online homeworks and watching televison. Photograph: Murad Sezer/Reuters 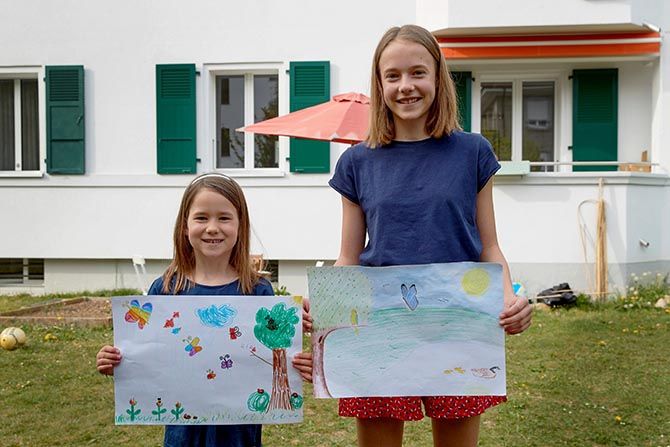 Eva and Camilla Auer stand outside their home in Lausanne, Switzerland. "I drew nature with lots of butterflies and nest in a tree," said Eva, who says she misses her friends and her teachers the most. Camilla said: "I drew a garden with lots of nature with some birds swimming in a lake and a tree and on the tree there was a bird and there's also a butterfly flying in there... I miss being at school and seeing all my friends and being able just to talk to my teachers and to be learning stuff with other kids." Photograph: Denis Balibouse/Reuters 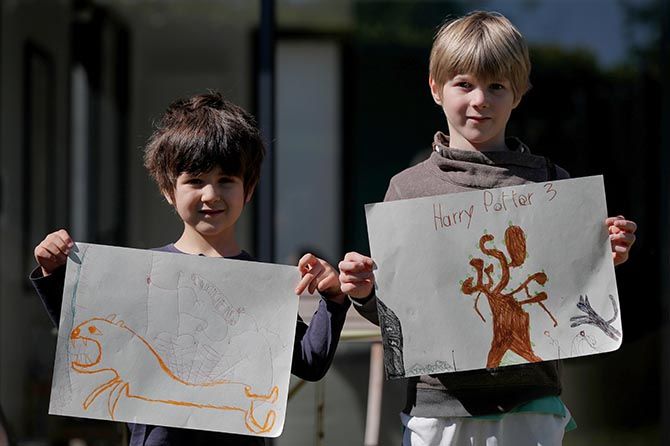 Come, 5, and Lilian, 9, stand in front of their house in Reze, France. "I drew an adult named Maxime, who is in the film that I invented with my brother Lilian. And I drew a dog called "gros chien coquin" (a mischievous big dog); a dog running in Africa through the brambles with his brother running after him. What I miss are my friends, and going to the swimming pool," said Come. Lilian said: "I drew a scene from Harry Potter 3. What I miss because of the lockdown is that I couldn't go to the birthday of my friend Antoine. I can no longer play sports, go to tennis, taekwondo, play football on the field near our house, or go to the swimming pool." Photograph: Stephane Mahe/Reuters 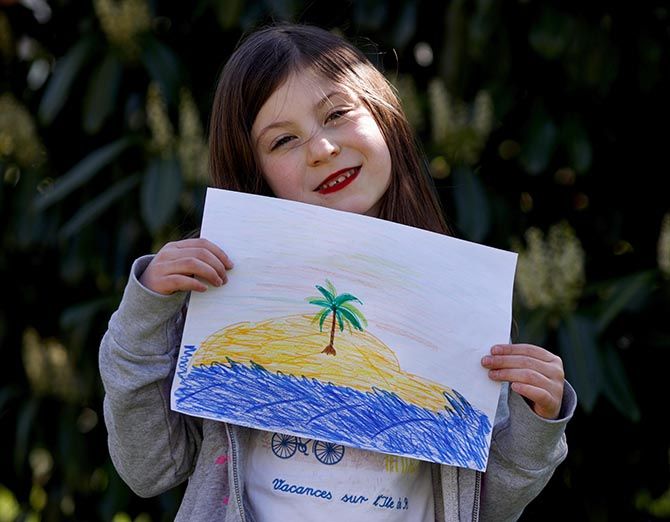 Zoe Klein, 6, poses for a photograph while holding a picture that she drew during the coronavirus disease (COVID-19) outbreak, as she stands in the garden of her home in Hombourg-Haut, eastern France. Zoe drew a picture of an island "because I'm missing holidays," she said. Photograph: Christian Hartmann/Reuters
AGENCIES
Related News: Reuters, Youssef, Ivan Posta, Jemima Christa-Faelist Tanamal, Matilda Soto Quilenan
Print this article 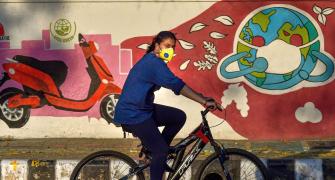 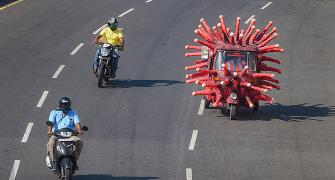 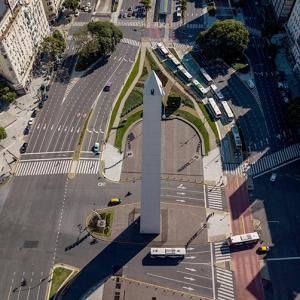 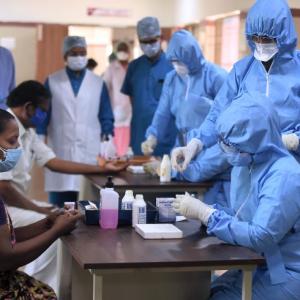