Chennai deserted as lockdown kicks in, 2,000 plus cases filed against violators

A 12-day lockdown without previous relaxations kicked in on Friday on Chennai and cases were filed against 2,400-plus people for violations and nearly 2,000 vehicles seized as police deployed drones and intensified patrols to ensure effective implementation of curbs. IMAGE: A vendor pulls his cart on a deserted road as the strict lockdown is imposed as a preventive measure againt the COVID-19 in Chennai. Photograph: ANI Photo

While arterial roads to neighbourhood streets were deserted, police placed barricades at key intersections and blocked free access to several main thoroughfares in the city and suburbs.

The top official said cases were filed on Friday against 2,436 people for violating curbs and 1,997 vehicles (1,883 two-wheelers, 67 autorickshaws and 47 light motor vehicles) were seized.

Also, cases were booked against 989 people for not wearing masks and non-maintenance of social distancing. IMAGE: Vehicles ply on a deserted road during an intensified lockdown as a preventive measure against the spread of coronavirus disease, in Chennai. Photograph: R Senthil Kumar/PTI Photo

For those who do not fall under exempted categories/essential services, venturing out of homes during lockdown, beyond the allowed time-frame (from 6 am to 2 pm to buy essentials only in their respective areas) is a violation of Section 144 of CrPC.

The lockdown is operational in Chennai city and suburbs located in the nearby districts of Chengelpet, Kancheepuram and Tiruvallur but fall under the jurisdiction of Greater Chennai Police.

Curbs are also being implemented in localities including Gummidipoondi and Ponneri in Tiruvallur district and Chengelpet municipality areas and such areas are not under the domain of city police.

The lockdown was clamped in view of continuing surge in virus cases and in nearby districts. 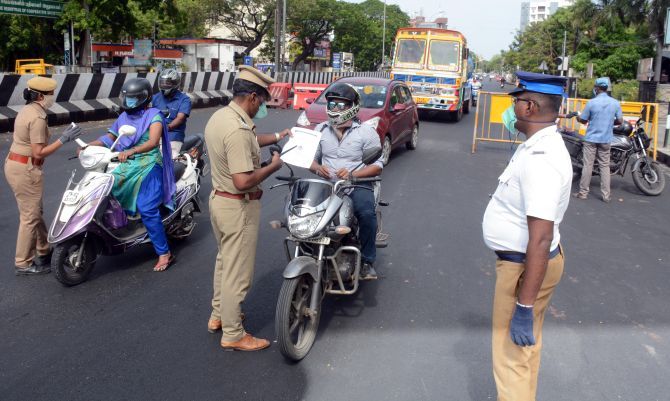 IMAGE: Police personnel asking people to stay at home as the strict lockdown is imposed as a preventive measure againt the COVID-19 in Chennai. Photograph: ANI Photo

Chengelpet and Kancheepuram have 3,432 and 1,001 cases respectively and Tiruvallur's case count stood at 2,291.

Shops selling essentials including vegetables functioned from 6 am to 2 pm and private vehicles and autos, taxis were off the roads.

Only some cargo trucks and vehicles related to essential services could be seen plying on roads and other key highways like the GST and GNT Roads in Chennai's southern and northern periphery.

Under the lockdown, only essential services are allowed unlike the relaxations available previously and the restrictions made a comeback in view of continuing surge in virus cases in the city and its peripheral districts. IMAGE: A drone is seen hovering over the city making announcement as lockdown has been intensified till June 30. Photograph: ANI Photo

Ahead of the lockdown, hordes of people left the city to their native places in other parts of Tamil Nadu where curbs are not applicable.

City Police Commissioner Viswanathan warned that vehicles including two-wheelers found violating lockdown norms will continue to be seized and asserted that curbs will be strictly enforced.

"During patrolling we found good cooperation from people in many areas. People, for buying essentials, should walk to shops and confine themselves to their neighbourhood. If use of vehicles was found and if they go to far away areas, the vehicles will be seized," he told reporters.

After inspecting a monitoring drill using a drone, Viswanathan said drones were also being used to sensitise the public about the need to stay indoors and follow norms apart from monitoring purposes. IMAGE: A traffic policeman maintains social distancing as he questions commuters on a mic for violating an intensified lockdown, to curb the spread of coronavirus disease, in Chennai. Photograph: R Senthil Kumar/PTI Photo

Recorded messages are broadcast through loudspeakers fitted on the drones that have been deployed in several areas for effective monitoring, he said.

Vehicle checking and patrolling has been intensified, Viswanathan said adding people, if they venture out to buy essentials, should wear masks.

The city police have put up checkposts in over 250 locations in the city and suburbs to check violations and implement lockdown effectively. Shops selling vegetables and essential commodities should ensure implementation of norms including social distancing and hygiene and in case of violations such outlets will be closed down, the senior police official said.

To a question, the police commissioner said about 10 per cent of the police work force has been given rest and has been kept on standby as a reserve force.