A Muslim couple, holding an anti-Citizenship Amendment Act placard, got married at the venue of the ongoing protest against the act in Chennai on Monday.

The couple, Sumayya and Shahin Shah, who arrived at the protest venue at north Chennai, was welcomed by the people and their marriage was solemnised by an Imam.

The priest introduced the couple to the gathering and community elders blessed them.

After a brief ceremony during which the tricolour fluttered in the background, the couple was showered with gifts.

Shah, along with Sumayya, held an anti-CAA placard and joined those raising slogans against the 'contentious' law. The placard read: "No CAA, NPR, NRC."

The newly weds have been actively taking part in the protest and decided to tie the knot at the venue, with elders agreeing to it.

The bride was clad in bright red saree with prominent zari works, while the bridegroom was dressed in maroon.

The protest has been on at Old Washermanpet in north Chennai from February 14, and been dubbed as "Chennai's Shaheen Bagh" in the social media. 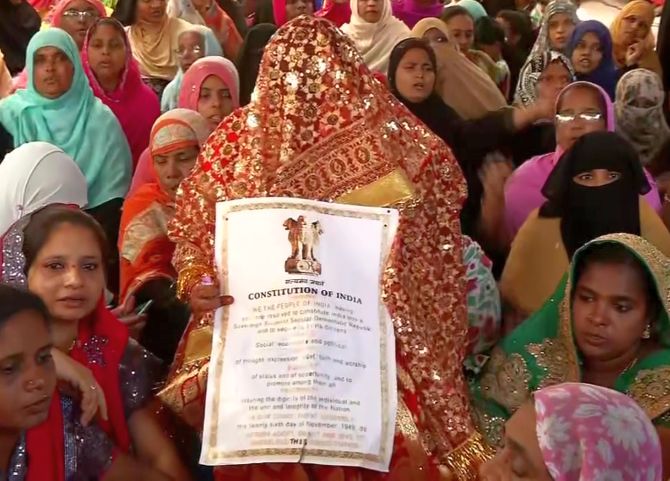 A congested neighbourhood, Muslims form a sizeable chunk of the population in Chennai.

Two streets serve as a protest venue and volunteers have put up a lengthy pandal to provide shade.

Photographs: PTI Photo, ANI
© Copyright 2020 PTI. All rights reserved. Republication or redistribution of PTI content, including by framing or similar means, is expressly prohibited without the prior written consent.