Meet the new faces in Modi's council of ministers 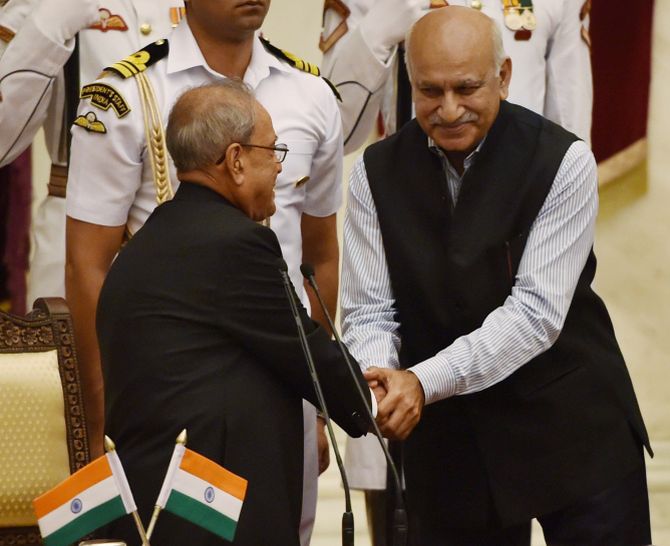 On Tuesday, Prime Minister Narendra Modi inducted new faces into the Union Council of Ministers keeping an eye on the assembly polls in Uttar Pradesh.

After the dropping of five ministers, Tuesday's expansion took the total strength of the Council of Ministers to 78, four below the Constitutional bar of 82.

Rediff.com gives you a look at newbies in the council of ministers. 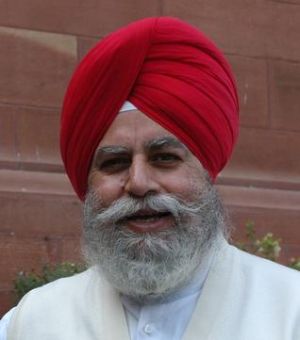 The 64-year-old is also the national vice president of the Bharatiya Janata Party and a member of the party's national executive committee.

He was first elected to the Parliament as an MP from Bihar in 1986.

Over the years of his career, he has held the posts of minister for urban development, and minister of parliamentary affairs in the Union government.

He was a minister in the P V Narasimha Rao cabinet. He was also the Deputy Leader of the Opposition in the Rajya Sabha till 2012 when he lost his seat from Jharkhand. 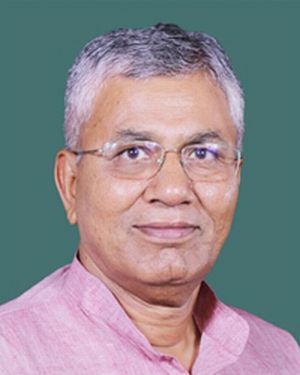 He is currently the chairperson of the joint parliamentary committee on offices of profit and also a member of the committee on subordinate legislation and the standing committee on personnel, committee on public grievances, law and justice. 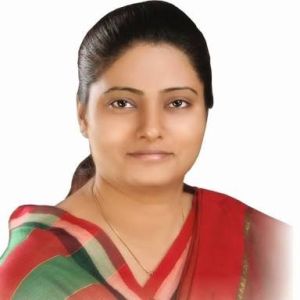 
Anupriya Patel, a first time MP, is an eloquent pro-Modi voice within and outside the Lok Sabha whose OBC (other backward class) roots have positioned her as an important BJP ally in poll-bound Uttar Pradesh.

Her inclusion in the Union council of ministers is apparently aimed at consolidating backward votes in poll-bound UP, especially eastern parts of the state where another tall Kurmi leader and Bihar Chief Minister Nitish Kumar has been trying to make a foray ahead of the 2017 assembly polls.

A Lady Shri Ram College, New Delhi, pass out, she was elected an MLA in 2012 and then entered the Lok Sabha two years later. Anupriya also has Master’s degrees in psychology and business administration. 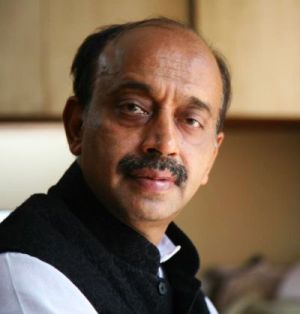 
Vijay Goel became president of the Delhi BJP in February 2013. He was elected to Rajya Sabha from Rajasthan in 2014.

A former DU students' union president, he has been the MP for the 11th, 12th and 13th Lok Sabha and has represented the Sadar and Chandni Chowk constituencies of Delhi.

He has previously served as the Union minister of state of labour, parliamentary affairs, statistics and programme implementation and youth affairs and sports in the National Democratic Alliance government until 2004.

He remained a prominent party leader in the national capital before being sidelined in the last two assembly polls.

The 62-year-old leader entered the Rajya Sabha for the first time in 2014. 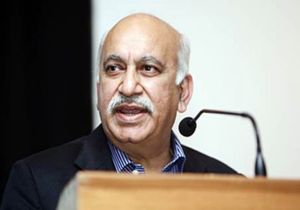 
Mobashar Jawad Akbar is a leading Indian journalist and author besides being the national spokesperson of the Bharatiya Janata Party and Rajya Sabha MP from Madhya Pradesh.

He has written several non-fiction books and was the editor-in-chief and then editorial director of The Sunday Guardian, a weekly newspaper that he founded, until he left to join politics full-time.

An eminent editor and author of several well-received books, including a biography of Jawaharlal Nehru, he debuted in politics in 80s as he came close to the then Prime Minister Rajiv Gandhi and wielded considerable influence.

He contested Lok Sabha election in 1989 from Kishanganj in Bihar and won but the Congress lost badly.

He drifted apart from the party after Gandhi’s death in 1991 and he soon returned to full time journalism.

Though he was critical of Modi, the then Gujarat Chief Minister, following 2002 riots, he gradually came closer to the saffron party as he assailed the Gandhi family over its leadership of the Congress. 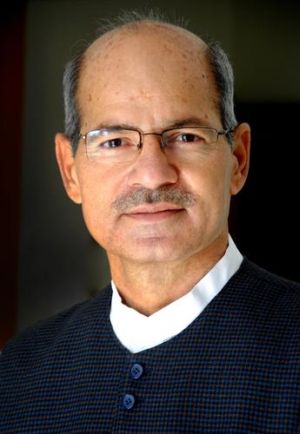 He has previously served as a member on the committee on water resources member, on the consultative committee for the ministry of information and broadcasting.

He was also on the parliamentary forum on global warming and climate change and was on the select committee to the Wakf (amendment) bill, 2010. 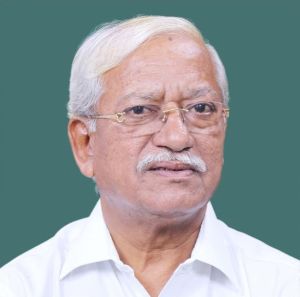 He has additionally served on the parliamentary committee on home affairs and its sub-committee on personnel policy of central paramilitary forces. 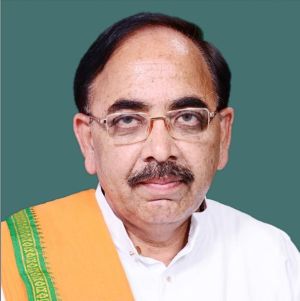 
He is one of the BJP’s Brahmin faces in Uttar Pradesh, where it is going the whole hog to win after being out of power for a decade-and-a-half.

Pandey, a first-time Lok Sabha member, is an MP from Chandauli bordering Bihar.

Pandey’s induction in the Union government is being seen as an attempt to reach out to the significantly large Brahmin vote bank in the state.

The 58-year-old leader is a two-time MLA and was elected to the UP legislative assembly in 1991 and 1996. He was the secretary of the BJP legislature party.

In 1997, Pandey became minister of state for housing and urban development and was the MoS planning (independent charge) between 1998 and 2000. He was also the MoS panchayati raj in UP between 2000 and 2002.

Pandey is currently a member of the business advisory committee and the committee of Parliament on official language.

In the past, he was a member of the standing committee on rural development and consultative committee, ministry of steel and mines. 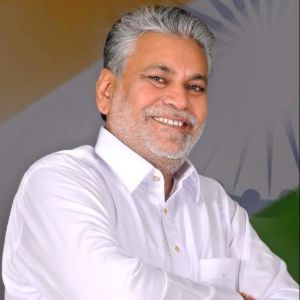 
A grassroots political worker, he is a known Modi-loyalist and belongs to Kadva Patidar community in Gujarat.

A two-term Rajya Sabha MP, the Patel leader is a science graduate who began his career as a school teacher in Gujarat and became principal of two schools and the chief officer of a civic body before joining politics.

His interest in politics began when he was chief officer of the Amreli civic body from November 1983 to March 1987.

A pro-Hindutva leader, 61-year-old Rupala was among those who offered kar seva in 1989 at the disputed Ram Janmabhoomi-Babri Masjid site in Ayodhya. He also participated in BJP stalwart Murli Manohar Joshi’s Ekta Yatra from Kanyakumari to Srinagar’s Lal Chowk in 1991-92.

He was first elected to Rajya Sabha in 2008 and then again in June 2016 and is known for his high-decibel interventions in the Upper House. 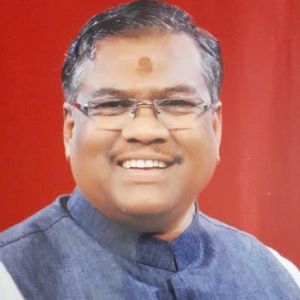 
Faggan Singh Kulaste is a Lok Sabha MP from the Mandla constituency of Madhya Pradesh.

He was a minister of state in the Vajpayee government in 1999.

He represented Mandla Lok Sabha seat from 1996 to 2009 but lost the seat later.

He regained the seat in the 2014 general elections. 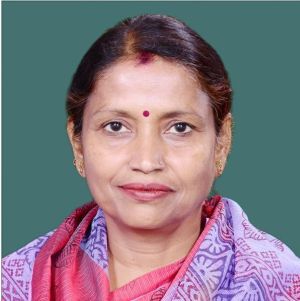 
She is a first time BJP MP and one of the party’s Dalit faces from Uttar Pradesh.

The 49-year-old had been a member of the Uttar Pradesh legislative assembly in 1996 and 2007 from Mohamadi.

She was elected in the 2014 Lok Sabha elections from Shahjahanpur seat.  A post-graduate, she is active in the Lok Sabha and has participated in 50 debates on a variety of issues, including on water preservation, safety of women and Supreme Court's decision on ban of diesel taxis in Delhi. 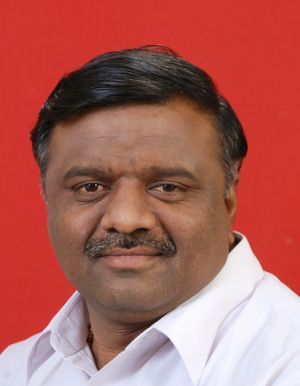 
The 49-year-old parliamentarian from Dahod is a popular tribal leader of central Gujarat known for an impeccable image, low-key style and accessible nature.

Before entering into politics in mid 90s, Bhabhor served as a teacher in government school. His father Sumanbhai Bhabhor was also in BJP but could not win any assembly poll. Born in August 1966, Bhabhor became an MLA for the first time in 1995.

Bhabhor served as deputy minister of food & civil supply between 1999 and 2001 in the Gujarat government. In the subsequent BJP-led governments, he served as minister of

state for health and family welfare, forests and environment tribal development, rural development, panchayats and labour and employment during different periods till 2012. 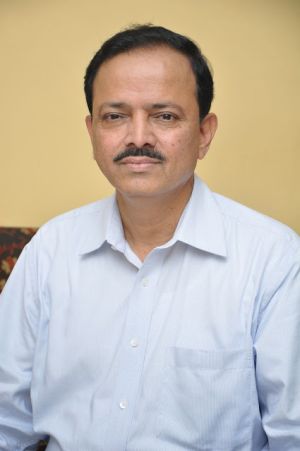 
An oncologist and a first-time MP, Subhash Bhamre’s induction into the Union ministry is being seen as the Modi government’s attempt to compensate Maharashtra for the exit of Raosaheb Danve, who resigned after being appointed the president of BJP’s state unit.

It is also an effort to humour BJP supporters in Jalgaon-Dhule belt, who are apparently unhappy over the exit of party heavyweight Eknath Khadse.

Bhamre, born on September 11, 1953, defeated Amrish Patel of Congress to enter the Lok Sabha in 2014 elections from the Dhule constituency, bordering Gujarat. His constituency adjoins Jalgaon, the home turf of Khadse. 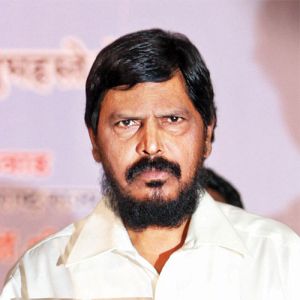 
Ramdas Athawale, known for his comic sense, is a prominent dalit leader from Maharashtra whose induction into the Modi government is part of BJP’s endeavour to reach out to the politically crucial segment ahead of elections to five states including Uttar Pradesh.

Athawale, who heads the Republican Party of India-Athawale, an NDA ally, has been a trade unionist and is known more for his blunt remarks and popular laughter-evoking speeches in Parliament and outside.

He has been part of NDA since 2011 after he quit the Nationalist Congress Party-Congress alliance. He currently represents Maharashtra in the Rajya Sabha and has been a three-time Lok Sabha member.

The RPI-A leader had last represented Mumbai North Central constituency in the Lok Sabha from 2004 to 2009, having been first elected to the lower house in 1998.

Athawale courted controversy when he demanded firearms for dalits for self-defence in the backdrop of suicide by a dalit research scholar in Hyderabad University.

An undergraduate from Agalgaon in Sangli district of Maharashtra, Athawale was elected to the Maharashtra Legislative Council in 1990 and became a Cabinet minister. 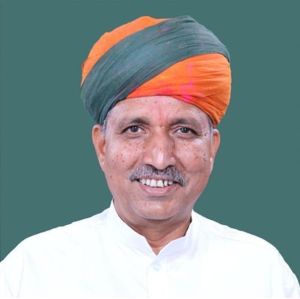 
Arjun Ram Meghwal is the BJP’s party chief whip in the Lok Sabha.

He was awarded the best parliamentarian Award in 2013.

Meghwal is also famous for cycling to Parliament when the Delhi government implemented its famous odd-even rule, which banned private cars on alternate days to combat pollution. 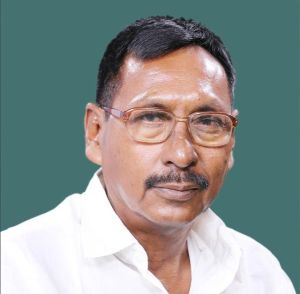 
The four-time BJP MP from Assam is a known champion for the cause of small tea growers in the Northeastern state.

Gohain, 65, who was first elected to Lok Sabha in 1999 from Nagaon, is a law graduate and was actively involved in the six-year-long Assam agitation against illegal immigrants in early 1980s.

He belongs to the Ahom community like former chief minister Tarun Gogoi and his induction into the Modi Ministry could be an attempt by the BJP to penetrate into this community, traditionally known as Congress supporters.

Despite Nagaon being a minority dominated constituency, Gohain was elected to the Lower House for four consecutive terms.

A state-level hockey player in his school days, Gohain was also a long-distance runner.

He is chairperson, Parliamentary committee on welfare of OBCs. 
Tamta, who would turn 44 on July 16, cut his teeth in politics as a member of district panchayat in his home state Uttarakhand and rose to become its vice president.

The induction of the Dalit leader from Almora comes at a time when BJP is promoting leaders of the backward communities in Uttar Pradesh and Uttarakhand where assembly polls are due early next year.

He had contested state assembly polls in 2002 as an independent but lost. Tamta tried his luck at the hustings again in 2007 and won on BJP ticket. 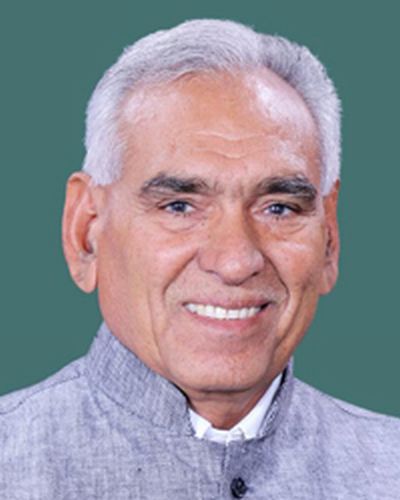 
Chhotu Ram Chaudhary, a Jat leader from Rajasthan is the MP from Nagaur. Born in Dhandhlas village in Nagaur, he was an officer of Rajasthan Administrative Service before joining politics.

Chaudhary became member and later chairman of the Rajasthan Public Service Commission. He is also an honrary Chairman of Veer Teja Mahila Shiksahn and Shodh Sansthan Marwar-Mundwa in Nagaur. 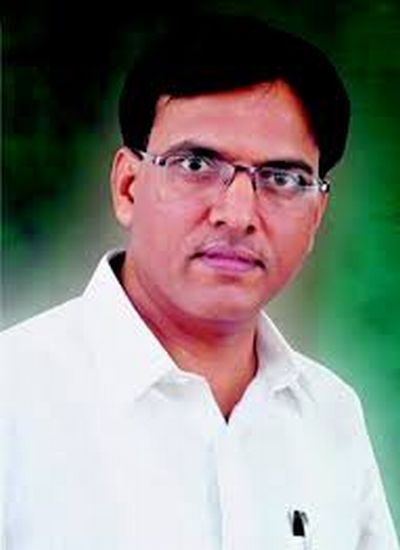 
The 44-year-old is apparently being groomed by the BJP as the “next generation leader” from the Patel community in Gujarat.

He was a student leader of the Akhil Bharatiya Vidyarthi Parishad and was elected as an MLA in the Gujarat assembly in 2002.

In 2012, he was elected to the Rajya Sabha from Gujarat, where he had been member of committee on petroleum and natural gas, national welfare board for seafarers and also member of a committee on chemicals and fertilizers.

He has also served as a spokesperson of Gujarat BJP and is a party state executive member.  His induction comes at a time when BJP is facing Patel quota stir in Gujarat.