At least 12 people drowned and around 30 were missing after a boat carrying them to a tourist spot capsized in the swollen River Godavari in Andhra Pradesh on Sunday, police said. The boat was carrying around 60 people, including nine-member crew, and 17 of them were rescued by the locals while search was on for others.

"Extremely pained by the capsizing of a boat in Andhra Pradesh's East Godavari. My thoughts are with the bereaved families," the prime minister wrote on Twitter.

He said rescue operations are currently underway at the site of the tragedy.

Jagan Mohan Reddy expressed shock over the mishap and announced an ex gratia relief of Rs 10 lakh each to the kin of the deceased.

The boat, belonging to a private operator, was on its way to the picturesque Papikondalu tourist spot in the middle of the river when it met with the accident, apparently on colliding with a large rock formation, at Kachchuluru in East Godavari District, about 200 km from Amaravati, they said. 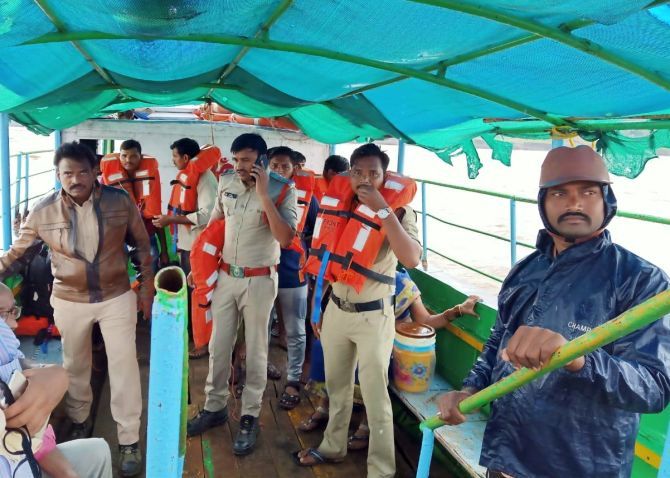 A special helicopter has been pressed into service from Rajamahendravaram for the rescue operation.

Two drivers of the boat named "Royal Vasishta" were among those killed.

Though the boat has license, it was not yet clear whether it had the required permission to ferry tourists since all boat operations in the river have been prohibited because of the flood. 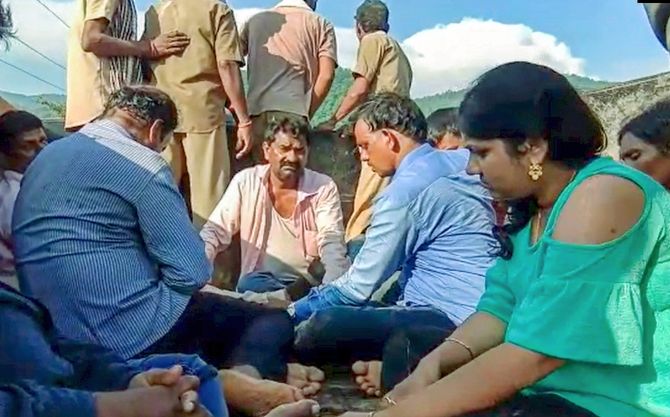 River Godavari has been in spate for the past few days and over 5.13 lakh cusecs of floodwater was flowing on Sunday when the mishap occurred.

The chief minister directed the East Godavari district collector Muralidhar Reddy to conduct a probe into the tragedy.

He also directed that all boat operations be suspended forthwith, official sources said.

Most of the tourists in the boat were from Hyderabad and Warangal in neighbouring Telangana.

Five of the tourists from Warangal were among the 17 passengers saved by villagers of Tutugunta, police said.

Photographs: ANI; PTI Photo
© Copyright 2023 PTI. All rights reserved. Republication or redistribution of PTI content, including by framing or similar means, is expressly prohibited without the prior written consent.