BJP's Pramod Sawant takes oath as Goa CM at 2 am 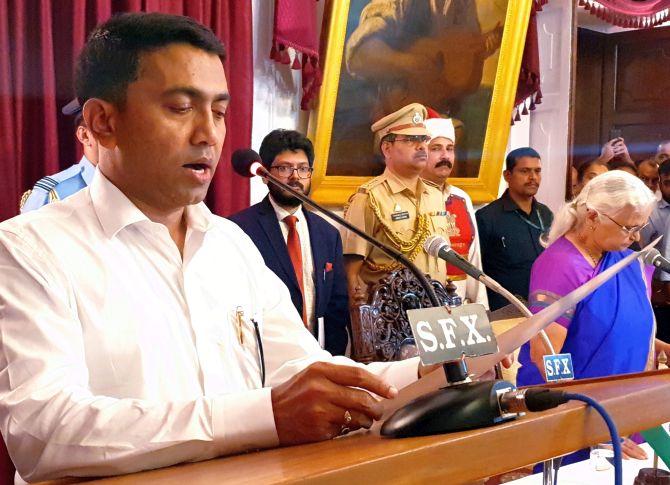 IMAGE: Goa governor Mridula Sinha, right, administers the oath of the office to Pramod Sawant as the new chief minister of the state, at the Raj Bhavan in Panaji, Goa. Photograph: PTI Photo

Bharatiya Janata Party MLA Pramod Sawant was sworn in as the new chief minister of Goa just before 2 am on Tuesday, capping a day of hectic parleys between the saffron party and its allies to put a new government in place in the state.

After multiple postponements of the oath ceremony on Monday, the day when his predecessor Manohar Parrikar was cremated with state honours, Sawant was sworn in by Goa governor Mridula Sinha at Raj Bhavan at 1.50 am.

Sinha administered the oath of office and secrecy to the 46-year-old legislator from Sankhalim in North Goa.

The governor also administered oath to 11 other ministers, including those from BJP's allies Maharashtrawadi Gomantak Party and the Goa Forward Party.

Interestingly, all the ministers who were part of erstwhile Manohar Parrikar-led Cabinet were sworn in by the governor.

Independent MLAs Rohan Khaunte and Govind Gawade were also sworn in by governor.

As per the power-sharing arrangement reached with allies, an MLA each from two small parties backing the BJP in the coastal state will be made deputy chief minister, party sources said.

Senior BJP leader Nitin Gadkari, the party's Goa in- charge, was present at the oath-taking ceremony.

The new government was sworn-in with the support of 20 MLAs, including 11 from the BJP and three each from the GFP, the MGP and independents.

All the MLAs supporting the coalition were present at the swearing-in ceremony.

Before taking oath as the CM, Sawant resigned from the post of speaker of Goa legislative assembly.

Deputy speaker Michael Lobo would be officiating as speaker till election for the post was held.

Gadkari, who began a series of meetings with BJP's coalition partners since Sunday, finally managed to have a consensus over the leadership of Sawant.

Sawant will now have to prove his majority in the assembly.

The oath ceremony, held at a cramped Raj Bhavan, was to take place at 11 pm Monday but was delayed due to inexplicable reasons.

Sawant said his party BJP has given him a big responsibility.

Talking to reporters, Sawant credited Parrikar for brining him into politics.

There were a series of meetings involving the Goa Forward Party and the Maharashtrawadi Gomantak Party's three MLAs each, an equal number of independents, and BJP legislators since late Sunday night to reach a consensus on Parrikar's successor.

Union minister Nitin Gadkari had flown into the state early Monday to lead the discussions. BJP chief Shah, who was also in Goa, is learnt to have supervised the party's bid to garner the numbers to stake claim to form government.

Parrikar was heading a coalition government comprising the BJP, three MLAs each of the Goa Forward Party, the MGP and three independents.

The Congress is currently the single largest party in the state with 14 MLAs. The BJP has 12 legislators in the 40-member Assembly, whose strength now is 36 after Parrikar's death.

The strength of the House has reduced due to demise of BJP MLA Francis D'Souza earlier this year, and Parrikar on Sunday, and resignations of two Congress MLAs Subhash Shirodkar and Dayanand Sopte last year.

All the state Congress MLAs met Governor Mridula Sinha on Monday and staked claim to form government in the coastal state.

The MLAs, led by Leader of the Opposition Chandrakant Kavlekar, went to Raj Bhavan and handed over a letter to Sinha, saying it was the single largest party in the assembly and should be allowed to form the government.

"We are saddened by the chief minister's demise, but before his final rites are performed, a new government has to be formed...The governor acknowledged that the Congress is the single largest party and she said she will get back to us," Kavlekar told reporters.

The funeral procession started from the Kala Academy where thousands, including Prime Minister Narendra Modi, paid their last respects to the former defence minister.

The mortal remains of the 63-year-old senior BJP leader were kept in a flower-decked hearse which left for the Miramar beach, where the last rites were performed.

The affection and popularity Parrikar enjoyed among ordinary Goans was on display as hundreds of common folks, and his party workers lined up to pay tributes to the chief minister, who died on Sunday after prolonged illness.