Death toll in the Bihar's rain related disasters on Tuesday mounted to 30 even as relief and rescue operations gathered momentum with improved weather conditions
and assistance commissioned by the Centre. 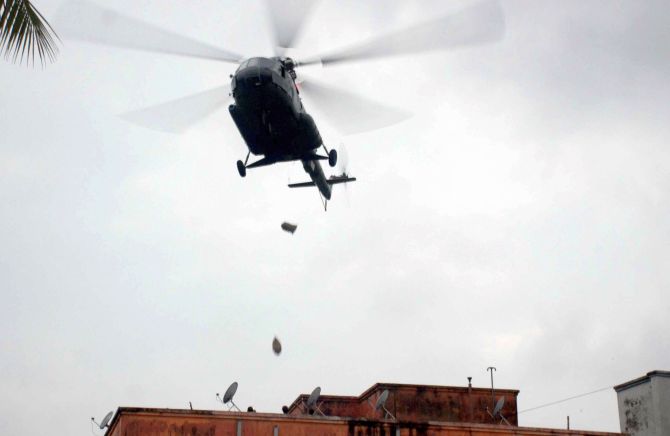 In Nawada district, about 110 km from Patna, bodies of two young men who were swept by strong current in a river two days ago were fished out by personnel involved in rescue operations on Tuesday morning, official sources said.

Residents of marooned Patna localities like Hanuman Nagar, Rajendra Nagar and Kankar Bagh woke up to roars of Indian Air Force helicopters hovering in the sky with food and other relief material.

The citizens, forced to stay indoors for more than 48 hours, dashed to the roofs of their buildings and pulled off their shirts waving these at the choppers in a fervent bid to draw attention of Indian Air Force personnel towards their need for help. 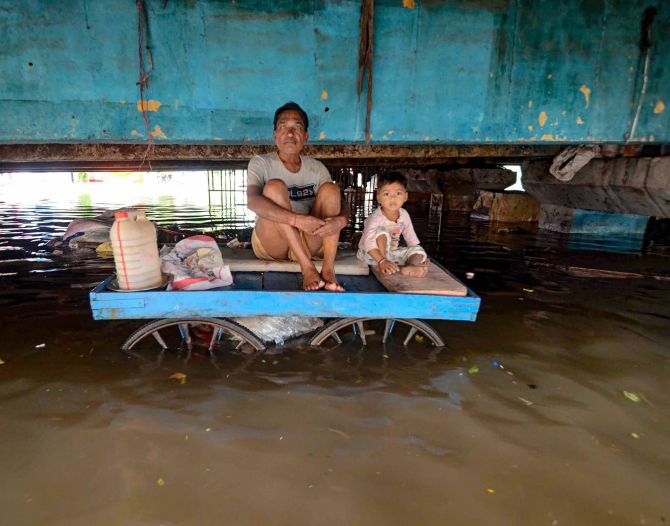 IMAGE: A flood-affected person sits with a child on a cart in an area affected by waterlogging following heavy monsoon rainfall, in Patna. Photograph: PTI Photo

They erupted in joy when packets dropped close to them but showed signs of dejection when these missed the intended spot and crashed into water-logged streets.

National Disaster Response Force, which has been engaged in relief and rehabilitation since Sunday while the city was still being pounded by heavy rains, stepped up their efforts on Tuesday.

Commandant of NDRF 9th battalion Vijay Sinha said 'more than 200 of our personnel are involved in round the clock operations and we have rescued more than 3,000 people in the last three days, including 12 pregnant women and 323 others in need of medical attention'. 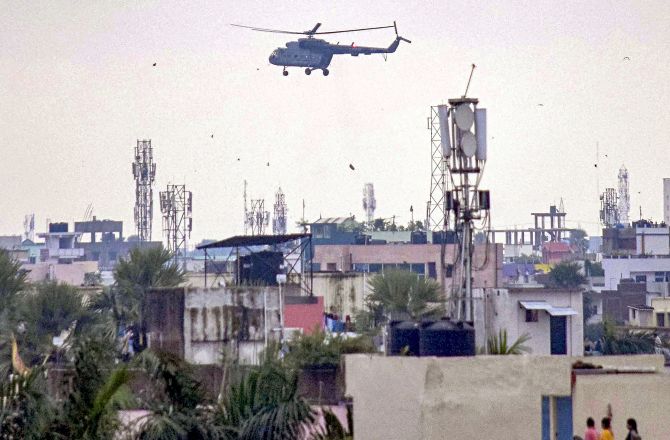 "We are also assisting the district administration in reaching out to people with essential items like edibles, drinking water, milk, candles and match sticks. Our control
room has been flooded with calls from various parts of the country who have flagged the need for help to their families back home.

"Their concerns have been promptly addressed. Our men have been saving lives of not just human beings. A deer calf was rescued in Gaighat area today", Sinha added.

Several other organisations came out with help. Volunteers of the Rashtriya Swayamsevak Sangh were seen distributing food among marooned populace in many affected areas of the city while 1,000 food packets and 2,000 packaged water bottles were distributed in the Kankarbagh locality by the National Thermal Power Corporation. 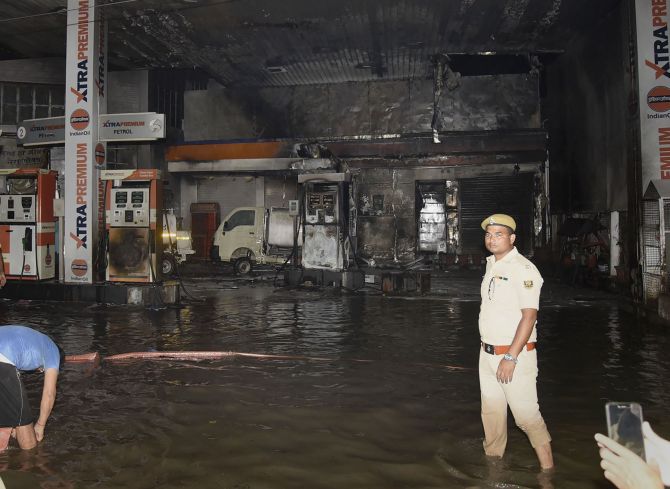 IMAGE: Police personnel stands guard at a waterlogged area near a petrol pump where a massive fire broke out at Dinkar Golambar, in Patna on Tuesday. Photograph: PTI Photo

Community kitchen was also set up by the Patna Sahib Gurudwara, which stands at the place where 10th Sikh Guru Gobind Singh had spent his childhood.

Chief Minister Nitish Kumar surveyed the Shri Krishna Memorial auditorium which has been converted into a storehouse for relief material.

His deputy Sushil Kumar Modi inspected the sump houses which are working overtime to flush out waters from the inundated localities.

Heavy rains and discharge of water through sump houses has caused water levels in the Ganges and its tributary Punpun to rise above the danger mark, though so far there have been no reports of the sump houses encountering problem of reverse flow. 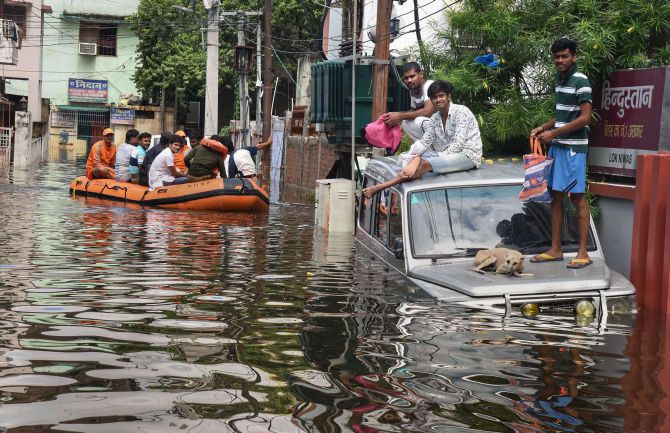 A flustered state water resources minister Sanjay Kumar Jha called the Farakka Barrage downstream 'a sorrow for Bihar' and sought its dismantling 'in the interests of the state'.

The state government drew flak for poor drainage system in the capital from allies and adversaries alike.

"The city has grown in an unplanned manner and scant attention has been paid to equipping localities with a sound drainage system", rued former Union minister and BJP MP Ram Kripal Yadav who had been the Deputy Mayor decades ago. 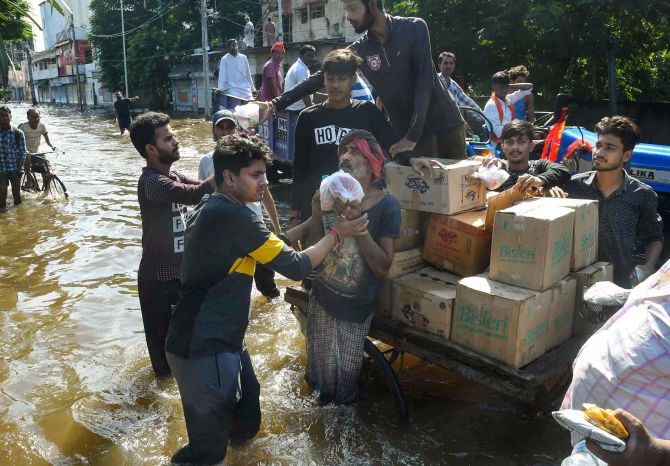 Lalu Prasads Rashtriya Janata Dal, the main opposition party in the state, issued a statement alleging 'massive corruption in drainage projects' and demanded a white paper on the same from the Nitish Kumar government.

A demonstration was staged by the district unit of the Communist Party of India-Marxist on the outskirts of the city which was called off after Union minister and local MP Ravi Shankar Prasad, flanked by BJP MLA Nitin Nabin, assured the agitators that their concerns will be squarely addressed. 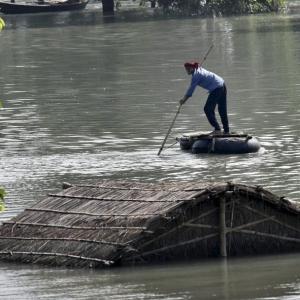 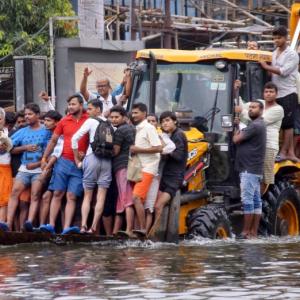