Farmers took the national centrestage on Tuesday as their call for a ‘Bharat Bandh' to push for a repeal of the new agri laws disrupted life in myriad ways with shops closed, transport affected and protesters squatting on roads and train tracks in several places, though many states remained largely unaffected. As the day wound to a mostly peaceful close, Union Home Minister Amit Shah stepped in to call farmer leaders for talks, ahead of the sixth round of talks between Central ministers and farmer representatives on Wednesday.

"We will demand just a 'yes' or a 'no' from Home Minister Amit Shah," farmer leader Rudru Singh Mansa told reporters at the Singhu border where thousands of farmers have been protesting for the last 12 days.

As analysts, politicians and others assessed how effective the 'bandh' had been,  Swaraj India leader Yogendra Yadav claimed it was observed in around 10,000 places in 25 states. Emergency services were exempted and banks, too, continued operations as the pan-India shutdown, backed by most opposition parties and trade unions, rolled out noisily but peacefully with its impact felt in Punjab, Haryana and Delhi, the epicentre of the snowballing protests, as well as in states such as Odisha, Maharashtra and Bihar.

In other places, the pandemic appeared to recede into the background. Security was stepped up, restive crowds demonstrated in some places and the numbers swelled at Delhi's border points. Protesters also blocked railway tracks in places in West Bengal, Bihar and Odisha.

As slogans such as ‘Kisan Ekta Zindabad’ were heard in protest centrepoints such as Tikri and the agitation picked up pace, the hashtag #Aaj_Bharat_Bandh_Hai was trending worldwide on Twitter till late afternoon. IMAGE: UP Police detain Samjwadi Party workers during a 'Rail Roko' demonstration in support of the nationwide strike, called by agitating farmers to press for repeal of the Centre's agri laws, in Prayagraj. Photograph: PTI Photo

From the Rajasthan capital Jaipur, where ‘mandis' were closed but shops open, there were reports of clashes between workers of the state's ruling Congress and the BJP.

In Delhi, where most main markets were open, tension spiralled with the ruling Aam Aadmi Party alleging that Delhi Police had put Chief Minister Arvind Kejriwal under house arrest.

City police denied the claim but the party stuck to its guns and said the move was a response to Kejriwal meeting protesting farmers at the Singhu border.

"If I was not stopped, I would have gone and supported the protesting farmers in their 'Bharat Bandh' movement. I am glad that 'Bharat Bandh' was a success," Kejriwal said.

Farmer unions had threatened to block national highways and occupy toll plazas across the country during a 'chakka jam' protest from 11 am to 3 pm.

All India Kisan Sabha general secretary Hannan Mollah described the shutdown as a show of strength by the farmers.

"We are standing by our demand that we want a complete repeal of the three laws and will not accept any cosmetic changes. If our demands are not met, we are ready to take our agitation to the next level," Mollah said. IMAGE: Socialist Unity Centre of India activists participate in a rally in support of the nationwide strike, called by farmers to press for repeal of the Centre's agri laws, in Kolkata. Photograph: Swapan Mahapatra/PTI Photo

The protesting farmers fear the new laws will pave the way for eliminating the safety of the Minimum Support Price cushion and do away with 'mandis', leaving them at the mercy of big corporates. The government maintains the new laws will bring farmers better opportunities and usher in new technologies in agriculture.

Opposition parties are expected to meet Kovind on Wednesday evening to raise their concerns about the three farm laws.

The political faultlines deepened. The BJP, in turn, slammed the opposition parties for its support to the shutdown, saying they are resorting to spreading confusion over issues to "stoke the fire" after being unable to counter Prime Minister Narendra Modi's popularity.

Union minister Prakash Javadekar noted that many states ruled by them had introduced contract farming and criticised their stand against the farm laws and their backing for the 'bandh'. 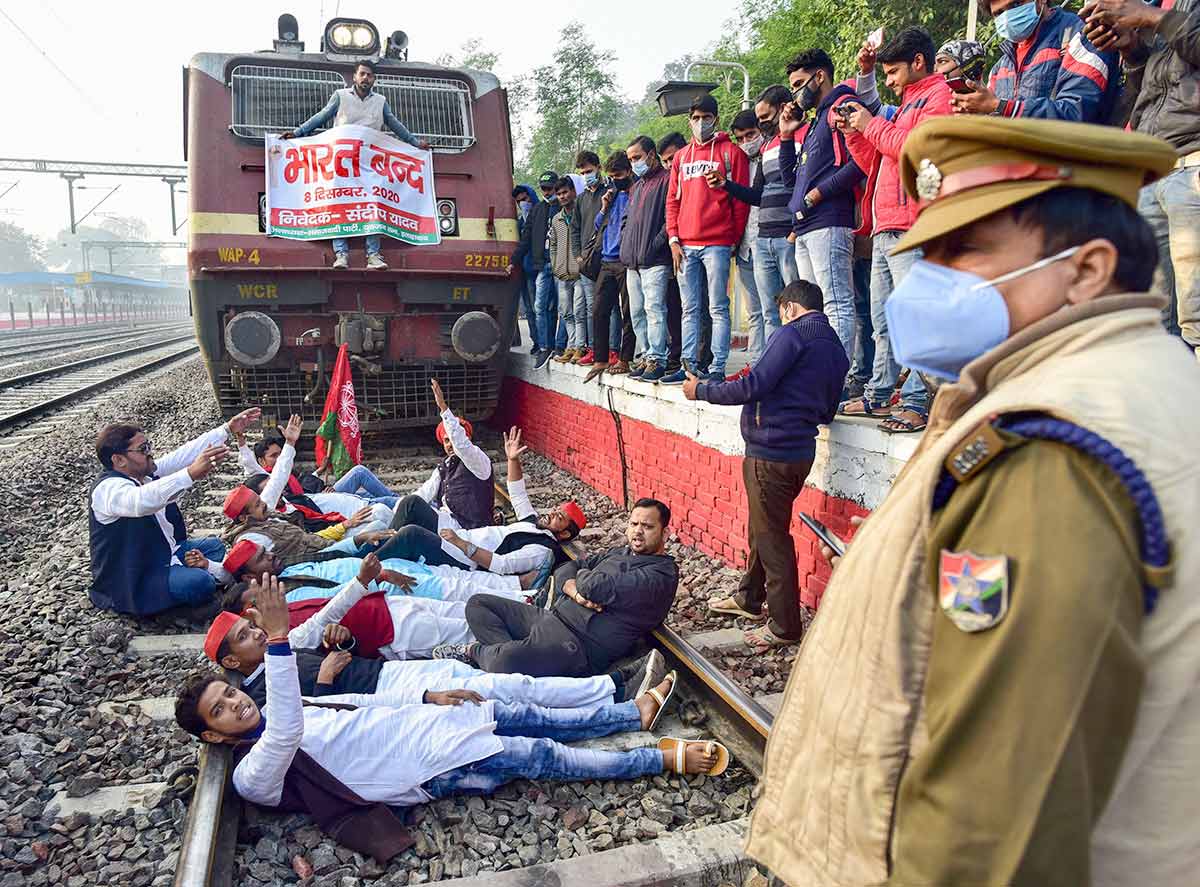 Farmers from Punjab and also Haryana have been the drivers of the movement against the laws. In both states, shops and commercial establishments were closed as were thousands of fuel pumps. Farmers assembled at highways and other key roads in both states since morning.

All major parties in Punjab -- the ruling Congress, AAP and the Shiromani Akali Dal -- extended their support. In West Bengal, where the ruling Trinamool Congress joined the Congress and the Left in supporting the shutdown but stayed away from enforcing it, the response was mixed. Railway tracks were blocked in several places and there were sit-ins on major roads.

Life was hit in Bihar too with train tracks, highways and inner roads teeming with protesters as opposition parties extended their support.

Elsewhere in the state, ruled by the Biju Janata Dal, normal life was hit with markets and offices shut and Congress and Left supporters blocking major roads. IMAGE: People with their luggage walk past a burning tyre set ablaze by demonstrators in support of the nationwide strike called by agitating farmers against Centre's farm reform laws in Patna. Photograph: PTI Photo

Major cities in Congress-ruled Chhattisgarh were deserted with most business establishments closed and public transport keeping away.

In Maharashtra, where the ruling Shiv Sena-NCP-Congress combine extended its support, wholesale markets in major cities like Pune, Nashik and Nagpur were shut. Retail shops also downed shutters in many cities.

Agriculture Produce Market Committees were closed in many parts of the state. The state government had appealed to protesters to not disrupt public transport services and buses and local trains were unaffected. There was a mixed response in other states as well.

In Assam, for instance, shops pulled down shutters, protesters blocked traffic and demonstrations were staged but most offices were functioning. Dozens of protesters were detained, officials said.

And in Uttar Pradesh, shops and offices were mostly open, while the Samajwadi Party held protests in a number of districts and even stopped a train in Allahabad. The ruling TRS and opposition parties, including the Congress and various unions, held protests across Telangana.

In Tamil Nadu, the opposition DMK and its allies, including the Congress, held protests across the state but life was mostly unaffected. 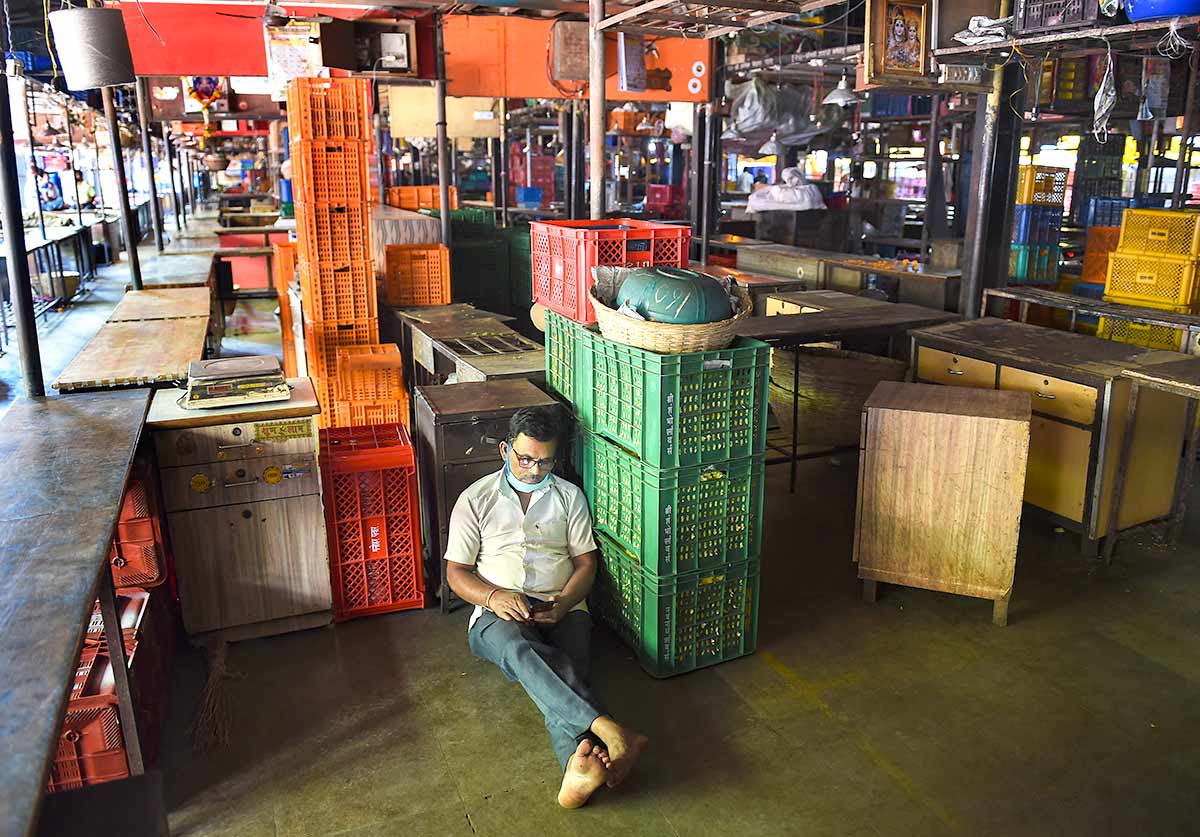 In the union territory of Puducherry, ruled by the Congress, however, the ‘bandh' call evoked a near total response.

Normal life was affected in parts of Karnataka as farmers and workers hit the roads. IMAGE: Demonstrators attempt to dismantle a hoarding during a protest in support of the nationwide strike in Patna. Photograph: PTI Photo

The three contentious laws at the centre of the protests are the Farmers' Produce Trade and Commerce (Promotion and Facilitation) Act, 2020, The Farmers (Empowerment and Protection) Agreement of Price Assurance and Farm Services Act, 2020 and The Essential Commodities (Amendment) Act, 2020. IMAGE: A vendor rests at the deserted Azadpur fruit market during a nationwide strike in New Delhi. Photograph: Shahbaz Khan/PTI Photo
© Copyright 2021 PTI. All rights reserved. Republication or redistribution of PTI content, including by framing or similar means, is expressly prohibited without the prior written consent.