The Uttar Pradesh government on Friday went all out in marking the homecoming of Lord Ram to this holy town -- the mythical event in 'Treta Yug' on which the festival of Diwali is based. Along the way, the organisers broke a world record. 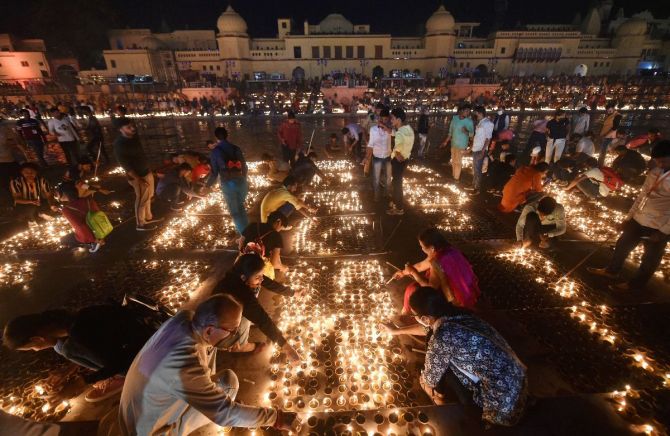 As dusk fell, volunteers lit up nearly six lakh diyas lined up on the Saryu riverbank.

A team from the Guinness World Records was present to see if it made it to their book. Hours later, team leader Nishchal Barot gave the final count as 6,06,569 'diyas', telling PTI that it was 'largest display of oil lamps' in the world.

An organiser said about 8,000 volunteers, drawn from a local college and NGOs, were involved in the feat.

The 'Deepotsav' included the reenactment of the arrival of God Ram and Goddess Sita to Ayodhya on their 'pushpak viman', a laser and sound show, cultural programmes and the lighting of a 'record' 5.51 lakh earthen lamps on the banks of the Saryu.

Actors representing the deities of Ram, Sita and Lakshman descended in a helicopter that sprinkled rose petals -- a modern take on the 'pushpak viman' that brought Lord Ram back home after 14 years in exile. 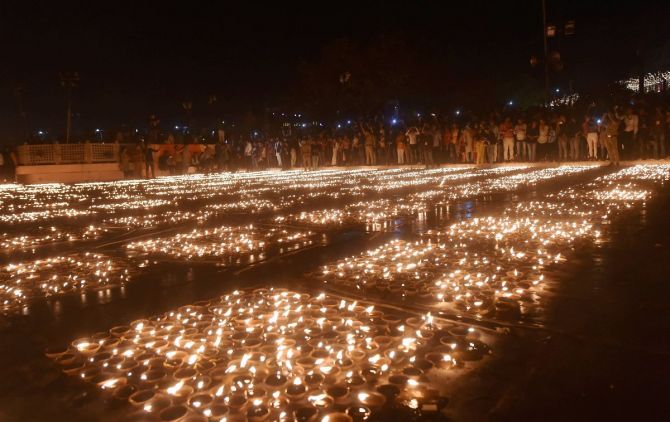 This was the fourth annual Ayodhya Deepotsav, and the first since the 'bhoomi pujan' in August for a Ram temple in the city.

The CM and the Governor visited the Ram Mandir site along with other UP and some bureaucrats.

Adityanath gave Prime Minister Narendra Modi the credit for the just-begun construction of the Ram Mandir. 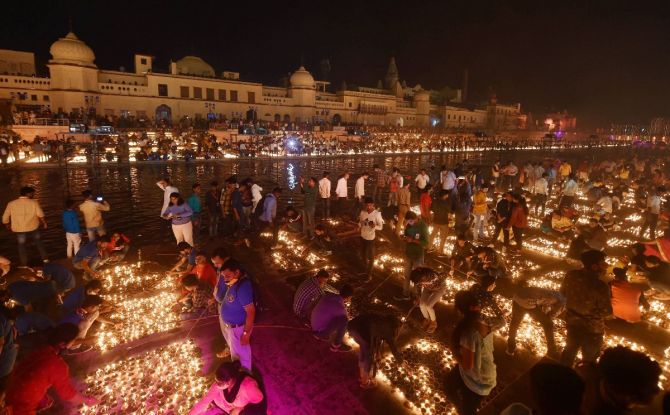 "Our generation is not only fortunate to see the start of construction of a Ram temple here but we also attended the historic event," he said, adding that generations of seers died without the dream being realised.

"I thank PM Modi, who is the one who implemented the ideology of Ram Rajya," Adityanath said in his speech to about 1,000 guests at the Ram Katha Park.

With COVID-19 protocols in place, the event was not open to the public.

He said when people in Ayodhya used to ask him about the construction of the temple, he would just tell them to trust Modi. 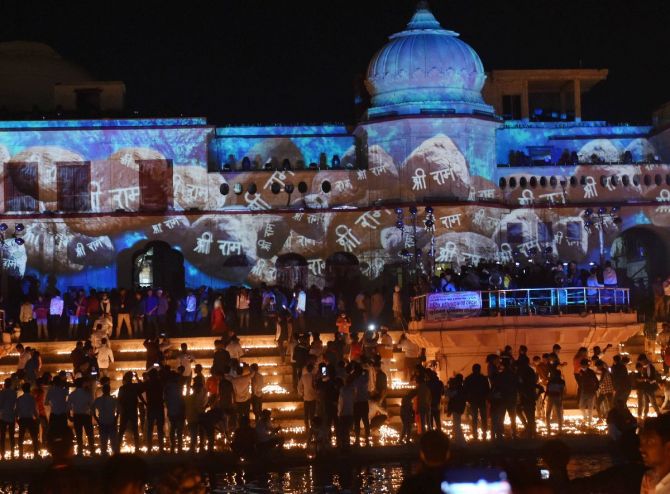 He said it is Modi's dream to develop Ayodhya as the 'Vedic Ramayana city'.

The celebrations began in the afternoon with a 'coronation procession' for Lord Ram starting from Saket College for the riverbank five kilometers away. Eleven tableaux, built around themes from the Ramayana, participated.

In the evening, 11,000 earthen lamps lit up the Ram temple site. On the banks of the Saryu bank, the chief minister performed an 'aarti'.

He then lit a diya at Ram ki Paidi, which was immediately followed by volunteers lighting up earthen lamps laid out on the riverbank.

Officials said there were about 1,000 volunteers to do the job, and aiming to create a new Guinness World Record by lighting at least 5.51 lakh diyas. 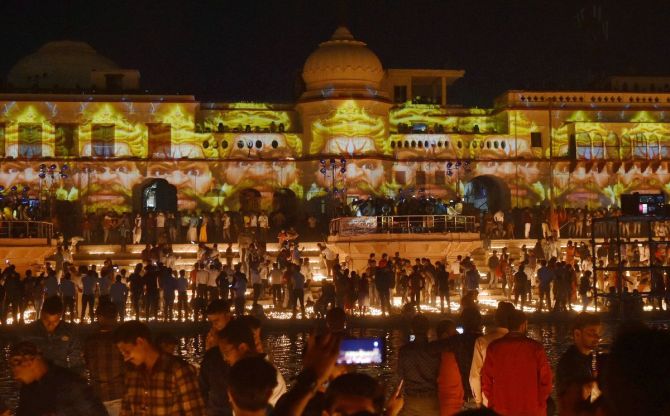 The final count was about 33,000 more than this, the government said later.

Adityanath on Friday said the target next year should be 7.51 lakh.

Eight teams of folk dancers were invited to perform at the Deepotsav.

"We did rehearsals for over two weeks before coming to Ayodhya," said Vishal, a member of a troupe from Jhansi. 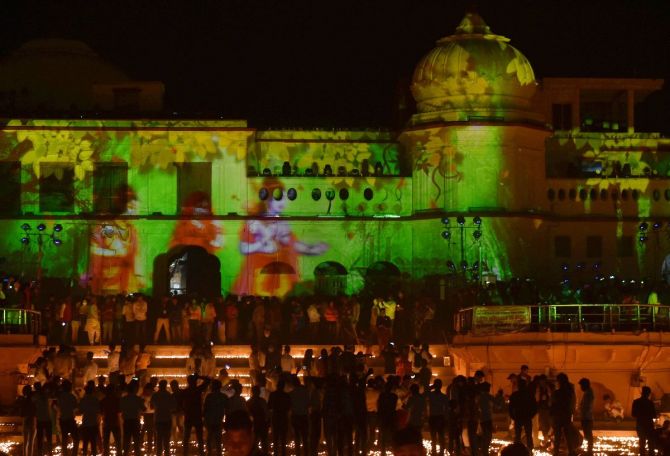 Anuradha, a folk dancer from Mathura, said, "We are very excited that we are performing on the streets of Ayodhya, the city of Lord Ram."

Before the event, state government officials had listed out development projects for Ayodhya -- some of them new, but many already in the pipeline.

These include an international airport and widening of roads to other cities.

The authorities plan to expand the Ram Katha Park, build a Ramlila Centre and carry out beautification of Ram ki Paidi.

Also planned are a modern bus stand, a sewage treatment plant and a multi-level parking lot.

IMAGES: Devotees light earthen lamps on the bank of Saryu River during Deepotsav celebrations in Ayodhya, on Friday. Photographs: Nand Kumar/PTI Photo
© Copyright 2021 PTI. All rights reserved. Republication or redistribution of PTI content, including by framing or similar means, is expressly prohibited without the prior written consent.