The attack on Nirankari Bhawan is a case of “terrorism”, Punjab Chief Minister Amarinder Singh said on Monday and hinted at the involvement of Pakistan in the blast, in which three people were killed and over 20 injured. 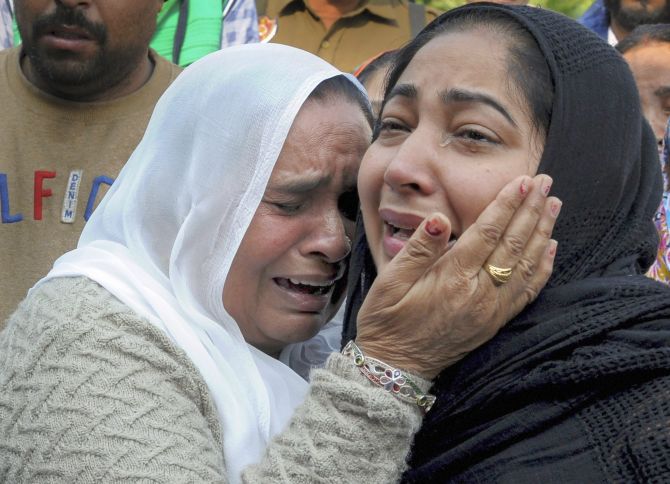 IMAGE: Relatives mourn the death of Sandeep Singh, at his funeral, in Amritsar on Monday. Three people were killed and over 20 injured when two motorcycle-borne men threw grenade on a religious congregation inside the Nirankari Bhawan's prayer hall at Adliwal village near Amritsar's Rajasansi on Sunday. Photograph: PTI Photo

After visiting the attack site along with his senior ministers, the chief minister said certain “leads” have been found which are being pursued aggressively and assured that culprits would soon be arrested. The chief minister has also announced a reward of Rs 50 lakh for anyone providing information on those involved in the blast.

“The grenade attack at the Nirankari Bhawan seemed to carry Pakistan’s signature, with initial investigations indicating that the grenade used was similar to the ones being manufactured by the Pakistani Army Ordinance factory,” Amarinder said.

He said the police had recovered similar HG-84 grenades from a terror module busted by the Punjab Police last month, indicating a high probability of the involvement of inimical forces from across the border.

Prima facie, this appears to be an “act of terror” by separatist forces, organised with the involvement of ISI-backed Khalistani or Kashmiri terrorist groups, said the chief minister, adding his government has taken serious note of the incident and the National Investigation Agency is also helping in the investigations.

Three persons including a preacher were killed and over 20 injured when two-motorcycle borne men threw grenade on a religious congregation on Sunday.

The attack took place inside the Nirankari Bhawan’s prayer hall at Adliwal village near Amritsar’s Rajasansi, an incident which the police are treating as a ‘terrorist act’. 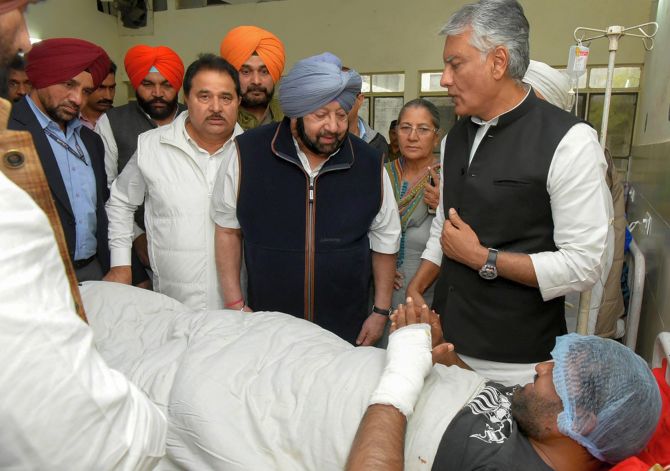 The chief minister flew in from Chandigarh along with his cabinet colleague and Amritsar MLA Navjot Singh Sidhu and Congress state president Sunil Jakhar to take stock of the situation.

Blaming the Amarinder-government for the attack, Shiromani Akali Dal president Sukhbir Singh Badal accused the chief minister of “hobnobbing with radicals who are hell-bent” on fomenting trouble in the state.

“I squarely blame Captain Amarinder Singh for the terror activity, as there is a conspiracy of supporting radicals and encouraging radicals. Today, he is responsible for what happened in Amritsar. The chief minister has hobnobbed with those forces which are hell-bent on fomenting trouble in Punjab,” Badal told reporters.

A NIA team visited the blast site on Sunday night along with explosive experts and held discussions with the top brass of the Punjab Police.

Responding to a query, Amarinder said the attack could not be equated with the Nirankari conflict in 1978 as that was a religious matter and the Adliwal incident was purely a case of terrorism.

Violence between the Sant Nirankari Mission and traditional Sikhs on April 13, 1978 at Amritsar had left 13 dead, and sparked the subsequent wave of terrorism in the state.

Sunday’s incident had no religious overtones, as per initial investigations, the chief minister asserted.

In response to another question, he said the state was already on high alert, with strict checking going on around landmark buildings and other vital public installations and infrastructure. 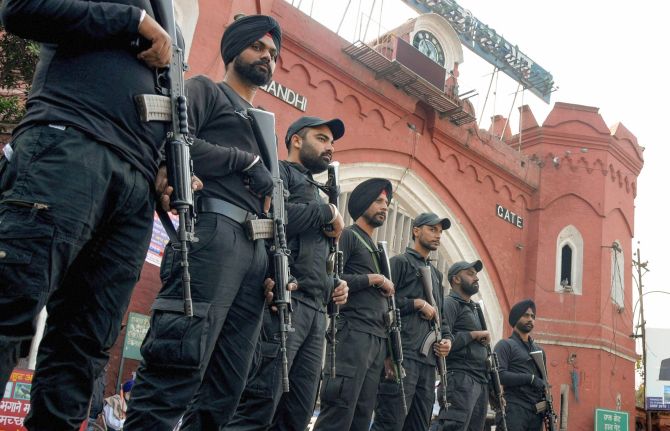 IMAGE: Punjab-police-SWAT-team stand guard at Hall Gate of Golden Temple, in Amritsar. Security was beefed up in the state following a grenade attack on a religious congregation inside the Nirankari Bhawan prayer hall on Sunday. Photograph: PTI Photo

Police ‘nakas’ (posts) have been set up in all districts and patrol parties have also been deployed in search of suspicious objects/activities, he said.

The chief minister said the district and police administration have been directed to explore the possibility of installing CCTV cameras at all strategic points.

Amarinder, who visited the hospital to meet the injured, announced jobs for the kin of those killed in the attack and Rs 50,000 each to the injured, in addition to their free treatment.

According to initial police reports, masked attackers, armed with pistols, had forced their way into the Bhawan after taking the civil guards hostage at gun point. They had lobbed the grenade into the prayer room.

Earlier, on his arrival, the chief minister was briefed by Home Secretary NS Kalsi, DGP Suresh Arora, IG Amritsar Surinder Pal Parmar and DC Amritsar Kamaldeep Sangh, who updated him on the progress of the investigations so far. 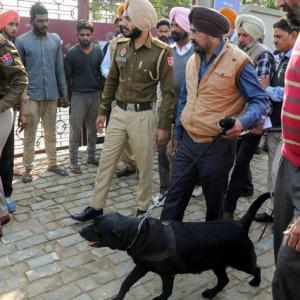 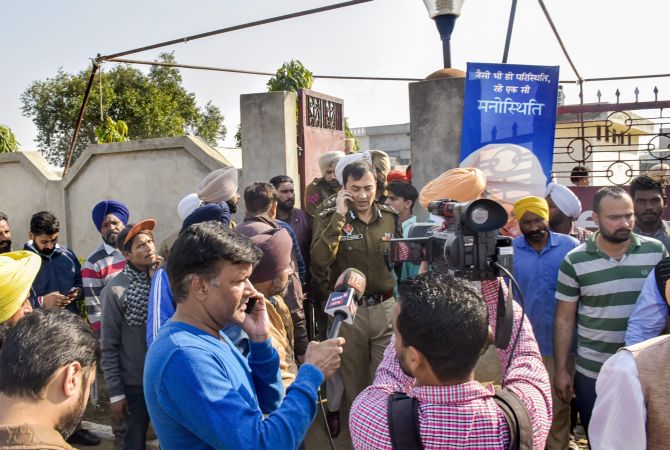