An estimated five crore devotees had their holy dip in the Sangam on Monday, the second and most auspicious day of ‘shahi snan’ on Mauni Amavasya, turning the Ganga, Yamuna and mystical Saraswati confluence  into the biggest ever convergence of human faith and culture. 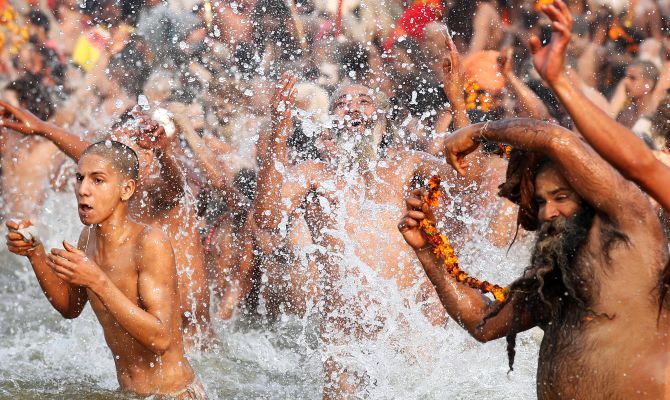 About 5 crore people had taken the holy dip in the Sangam by 5 pm on Monday, estimated administration officials, suggesting it was a new record of human congregation anywhere.

In 2013, during the 12-yearly Kumbh congregation here, the turnout on Mauni Amavasya day was over 3 crore, the highest till then, they added. 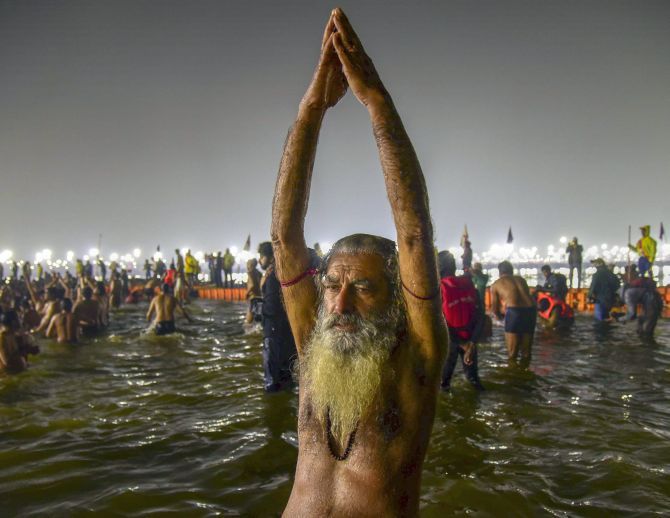 IMAGE: Lakhs of people waded into the Sangam, dazzling with over 40,000 LED lights and began taking dips. Photograph: PTI Photo

The record-breaking spree of holy dips at the 40 bathing ‘ghats’ of the Sangam began soon as the clock struck the midnight intervening Sunday and Monday, heralding the auspicious hour.

With advent of the auspicious hour, lakhs of people waded into the Sangam, dazzling with over 40,000 LED lights and began taking dips, presenting a mesmerizing, wave-like picture of human heads submerging and emerging together from the water amid the chants of ‘Har Har Gangey’.

The holy bath continued beyond the day-break, when the sunlight dimmed the LED lights at Kumbh, and went on for the entire day. 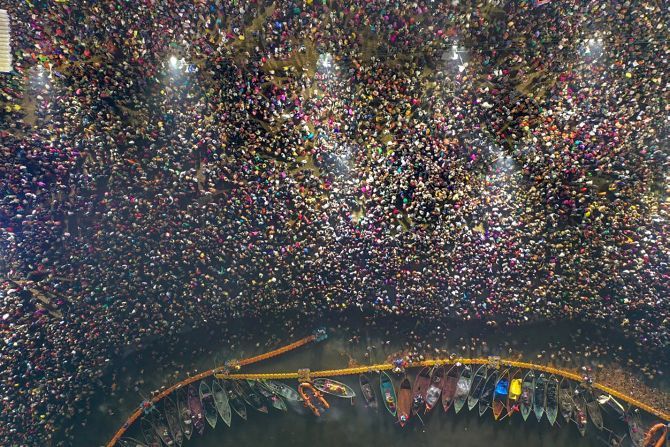 IMAGE: A view of Sangam at early hours on the auspicious Mauni Amavasya during the Kumbh Mela. Photograph: PTI Photo

Led by ascetics Hindus since time immemorial, the sacred bath on Mauni Amawasya at Kumbh, described as an “act of faith” aimed at “cleansing of one’s sins and seeking divine blessings” has been attracting pilgrims across the globe.

The busiest among all sacred bathing days in the 50-day long Kumbh Mela, Mauni Amavasya this time had greater significance as it fell on a Monday, a rather rare combination in many ways, explained some seers here.

The day began as early as 3 am for many devotees who were seen making a beeline for the Sangam on foot amid the restricted entry of vehicles to the Kumbh Nagari, the sprawling 32,000-hectare township set up on the river banks. 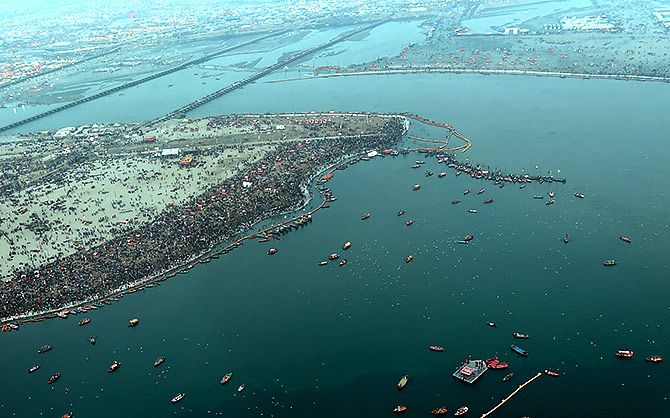 IMAGE: An ariel view of Sangam on the eve of the second royal bath. Photograph: Atul Yadav/PTI Photo

“Yeh Kumbh nahi aasan, bas itna samajh lijiye; thanda hai pani aur dubaki lagana hai (The Kumbh is not an easy task, the water is cold and you have to take the plunge),” said Ravish Vajpayee, an aspiring poet, who was just out after taking the dip at one of the ghats. 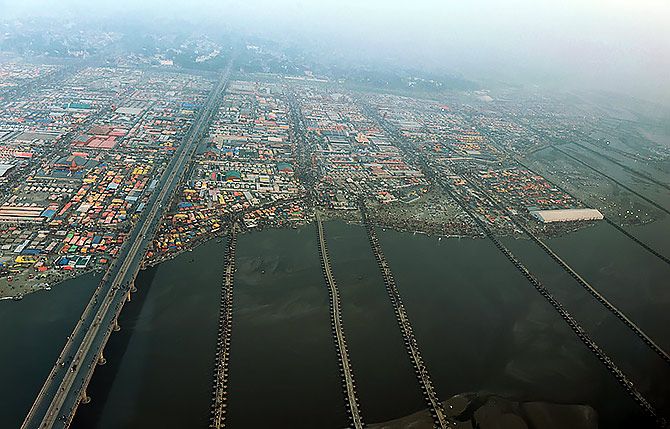 Though ‘mauni’ means ‘silence’, the chants of ‘Har Har Ganga’ and ‘Ganga maiya ki Jai’ reverberated the Kumbh Mela venue and grew louder at the day break when Naga Sadhus, a martial order of ascetics, who roam naked with ash smeared on their bodies, proceeded to ghats in processions, dancing and singing with their gurus sitting atop decorated chariots.

Besides observing silence, many devotees perform ‘pind dan’ on this day for the souls of their ancestors to attain peace and to seek forgiveness and blessings from them. 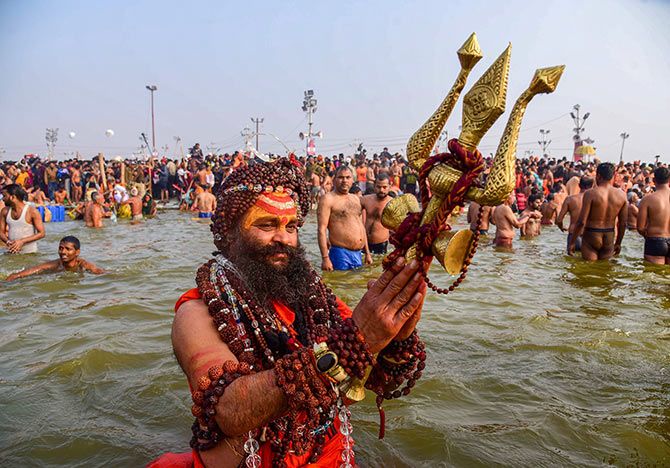 IMAGE: A sadhu holds a trident as he takes a holy dip at Sangam on the auspicious 'Mauni Amavasya' day during the Kumbh Mela in Prayagraj. Photograph: PTI Photo

Offering foods and clothes to the poor and needy is considered another important ritual of the day.

Seers of 13 akharas (seven Shaiva, three Vaishnava, two Udasina, and one Sikh) who have traditionally attended the Kumbh Mela were the first to take the holy bath.

The Kumbh administration had allocated 30 to 40 minutes each for the seers of each akhara to have their bath. 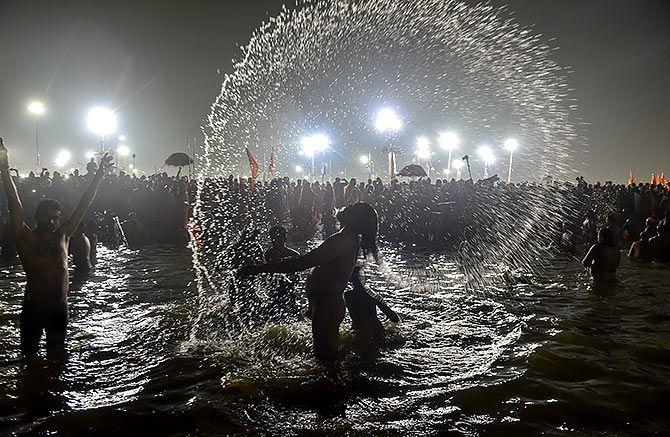 A massive security arrangement too has been put in place, with 40 police stations and as many fire stations set up to deal with any emergency situation.

Detailing the security arrangement at the venue, officials said an Integrated Command and Control Centre with 12 wireless grids has been set up at the Kumbh Mela venue for close coordination and prompt communication among security personnel.

The entire area has been put under the surveillance of 440 CCTV cameras, they added. 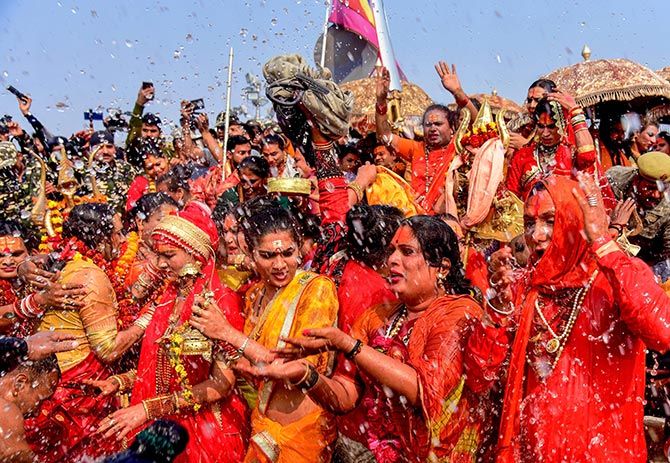 As the mega city briefly turned into possibly the most populous place on the face of earth on Monday due to massive turnout, many entry points to the Kumbh Mela venue had to be closed.

While many complained about being stuck on the way to ghats, those who managed to enter the venue were seen boasting how they broke cordons to reach the river bank. 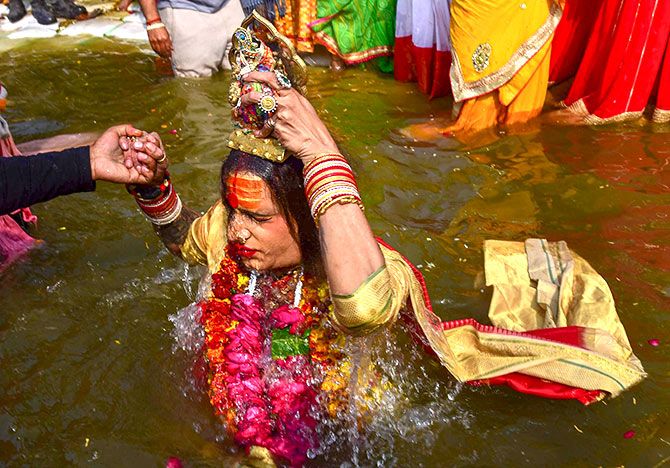 “Do they expect us to go back without taking a dip? One says ‘go there’, the other says ‘this side is blocked’. We were already too tired to put up with this nonsense. Of course, I had to break the cordon ultimately,” said 25-year-old Anshul Gupta from Lucknow. 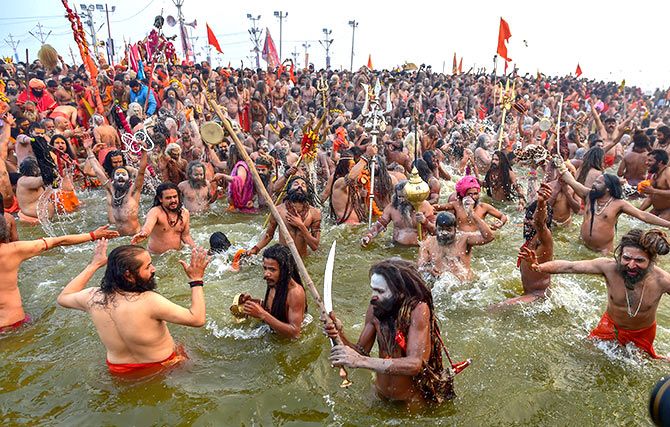 The Kumbh, beside Mauni Amavasya, witnesses two ‘shahi snans’, the first of which took place on Makar Sankranti (January 15) and the third and the last being scheduled on Basant Panchmi (February 10). 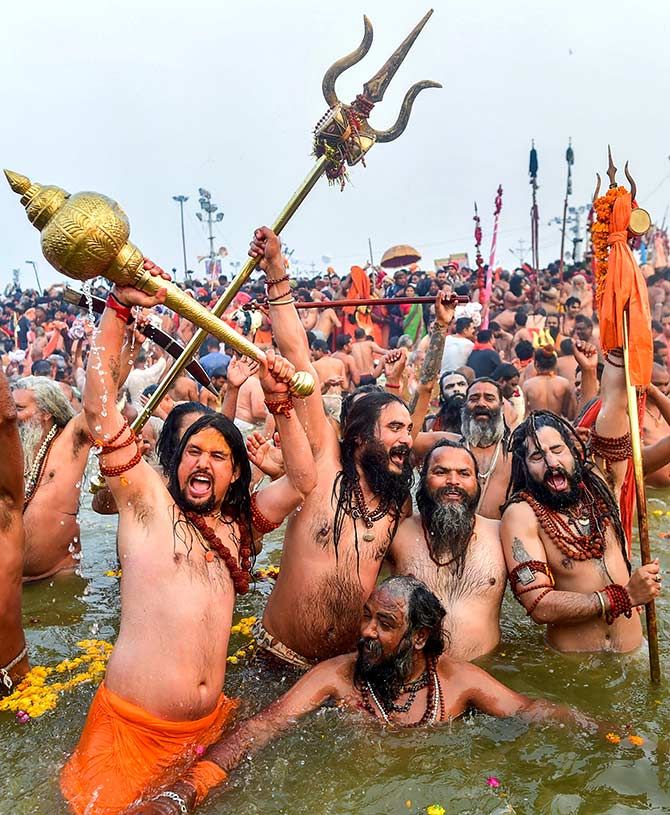 IMAGE: About 12 crore people are expected to visit Kumbh till March 4, when the festival will come to a close. Photograph: Manvender Vashist/PTI Photo

About 12 crore people are expected to visit Kumbh till March 4, when the festival will come to an end. 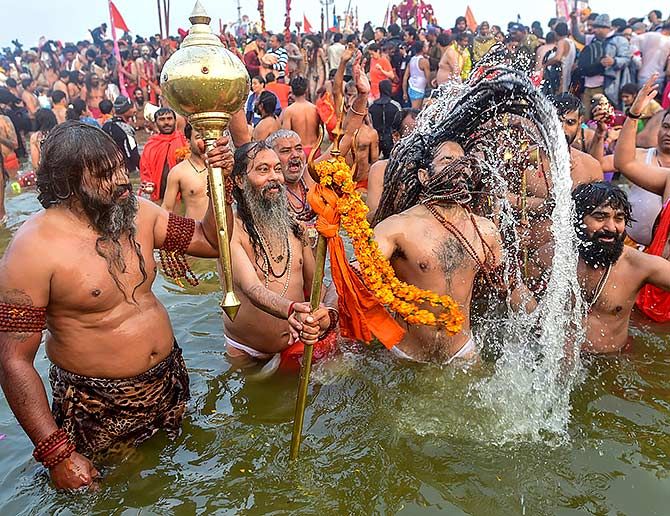 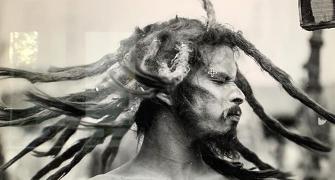 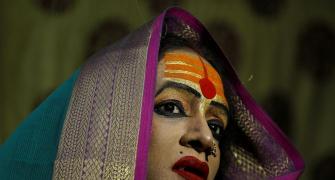 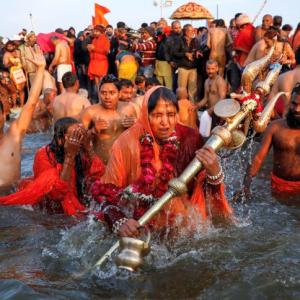 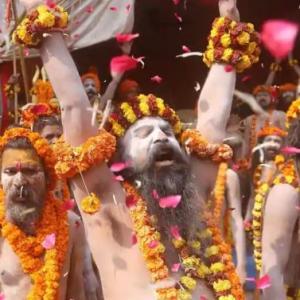