Upset over the delay in the implementation of the One Rank, One Pension policy, ex-servicemen on Sunday held protests across the country, including in the national capital, demanding its immediate introduction. 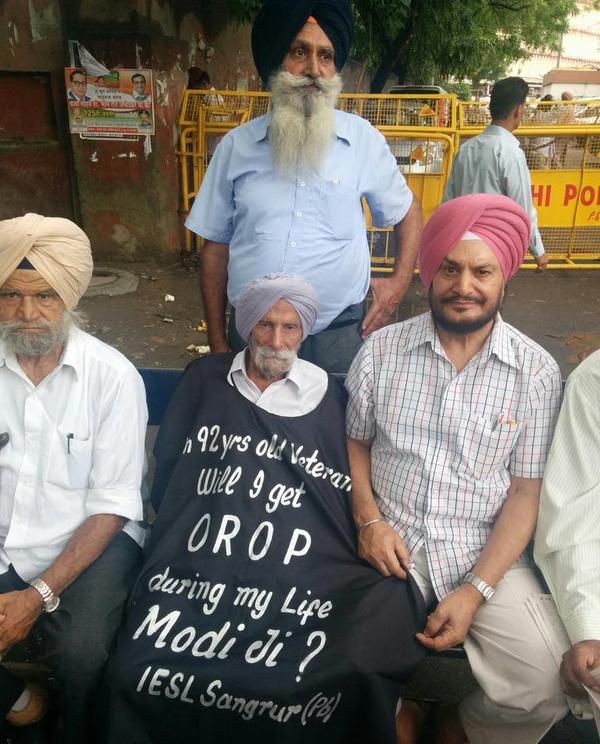 An army veteran takes part during the OROP protests at Jantar Mantar. Photograph:@AjitKakkar/Twitter

The former soldiers have threatened to go an a relay hunger strike from Monday.

The protest comes after talks -- both formal and back-channel -- with the government failed as the ex-servicemen were not given a specific timeline for the implementation of the long-pending OROP.

“Prime Minister Narendra Modi has assured us that it will be implemented, but it has been one year,” said Colonel Anil Kaul (retired), the media advisor to Indian Ex-Servicemen Movement. Several thousand army veterans were out to protest and demand for the quick implementation of OROP. Photograph: @shuksrpcol/Twitter

Major General Satbir Singh (retired), vice-chairman of IESM, told the media that the protests will continue till the time OROP is not implemented.

The ex-servicemen maintained that they were not against any government but are protesting to get their long-pending dues. They also said that they have sought an appointment with the President Pranab Mukherjee to take up this matter. Interestingly, some farmers’ groups and students from DelhiUniversity and JawaharlalNehruUniversity also joined the protests on Sunday.

The slogan of ‘Jai Kisan, Jai Jawan’ was raised as a group of farmers joined the protest at Jantar Mantar here to support the ex-servicemen.

The Modi government has said that it is committed to OROP, one of its key poll promises, but has been unable to implement it till now.

In the eighth instalment of his ‘Mann Ki Baat’ radio talk, Modi had assured ex-servicemen that his government would soon resolve the OROP issue.

OROP envisages a uniform pension for the defence personnel retiring in the same rank with the same length of service, irrespective of their date of retirement. Close to 22 lakh ex-servicemen and over six lakh war widows stand to be the immediate beneficiaries of the scheme. The ex-servicemen's protest comes after they sent a letter to Finance Minister Arun Jaitley. Photograph: @ragarwal/Twitter

Even though the government has said it is committed to implementing OROP, there has been no official clarification on why the scheme is getting delayed.

Defence ministry sources said that the OROP file is with the finance ministry for a final budgetary approval.

Defence Minister Manohar Parrikar has repeatedly said that the government has completed all formalities and OROP will be implemented soon.

Meanwhile, a group of ex-servicemen considered to be close to the Rashtriya Swayamsevak Sangh, wrote over the weekend to Finance Minister Arun Jaitley seeking the implementation of OROP so as to not “breach the trust” of 25 lakh retired soldiers.

In an open letter, it also sought that a definite date be declared for the implementation of OROP.

Recalling that Modi had at a September, 2013, rally at Rewari promised to look after armed forces personnel if elected to power at the Centre, the Akhil Bharatiya Poorva Sainik Seva Parishad said OROP is a burning and emotive issue.

“The ex-servicemen across the country felt that finally here was a political party that is friendly and empathetic towards the cause of a soldier. As a result, most of us went all out to campaign for the BJP throughout India,” Lieutenant General VM Patil, (retired) president of the Parishad, said in the open letter to Jaitley.

“However, we now hear that your ministry, if not you personally, is delaying the implementation process and are exploring the possibility of combining the issue of 7th Pay Commission, or worse, just delay the announcement of OROP indefinitely,” he said.

Underlining that soldiers were prone to talk straight and bluntly, Patil said the signals emerging from finance ministry makes them believe that the “government, or at least a section of the government, is bent on breaching the trust of 25 lakh ex-servicemen in India”. One Rank One Pension: Talks fail; military veterans to go on hunger strike

Govt committed to One Rank One Pension: PM Modi 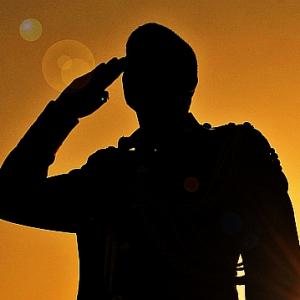