The annual floods and erosion by Brahmaputra had eaten away their landed properties over the years and this time the people of Bhogerpar village in Assam's Barpeta district have been forced to take shelter on embankments, relief camps and neaby villages. 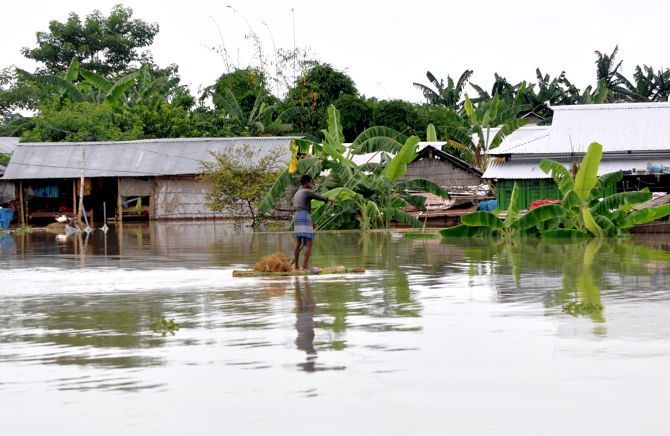 IMAGE: A man crosses a flooded area on a makeshift raft in Barpeta. Photograph: ANI Photo

The small village, situated 15 km from Barpeta district head quarter town and measures just about one sq km, has been facing the ruthless assault of the river every monsoon so much so that every immovable property standing on it -- homes, schools, places of worship for its 150 Hindu and Muslim families has been destroyed.

As a result of the annual flooding the number of families living in Bhogerpar has decreased to 95-75 of them Hindus and the rest Muslims.

"In 2007-08, the Brahmaputra eroded a massive portion of the village. Since then, we are losing our lands every year to the mighty river and our sufferings are growing," says Ratul Pathak, a 46-year old teacher at a private school who had to flee when flood waters washed away his home in the village,

Like many others in the village, he has with him bare minimum necessities from his home at Bhogerpar.

"Today there is no crop land in our village," Pathak, who has now taken shelter at Baradi near Barpeta, said.

Most of those who live at Bhogerpar village have become cattle farmers and some have even turned daily wage labourers, while many left for nearby villages and towns to eke out their living, he said.

According to the Assam water resources department, flood and erosion is a serious issue in the state as more than 4.27 lakh hectares or 7.4 per cent of the state's total area have already been eroded by the Brahmaputra and its tributaries since 1950.

The annual average loss of land is nearly 8,000 hectares and the width of Brahmaputra has increased up to 15 km at some places due to erosion, it said. 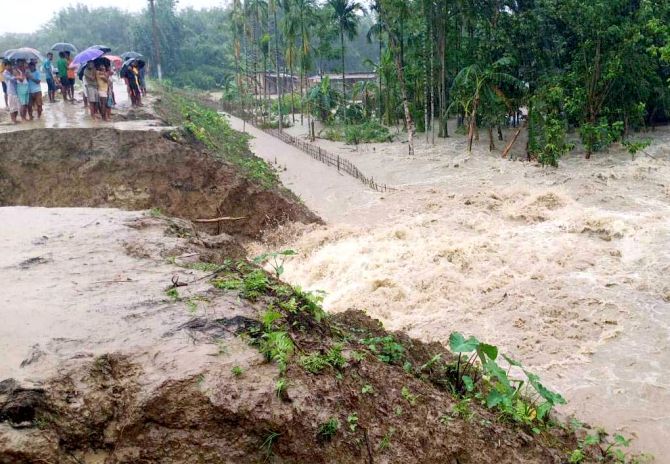 IMAGE: Villagers watch a washed away road due to flooding following the incessant rainfall at Bojali in Barpeta. Photograph: ANI Photo

The surveys carried out during different periods reflect an alarming picture regarding widening of the Brahmaputra, whose total area in the state has gone up to 6,080 sq km in 2006 from 4,850 sq km during the survey conducted between 1963-1975.

67-year-old villager Ramani Pathak said her family has decided to settle permanently at Baradi as flood and erosion have become an annual affair at Bhogerpar and alleged that no step is being taken by the government to check it.

"It is known to all that none can prevent the mighty Brahmaputra, but at least some measures should have been taken. We have no one but the Almighty. Our only namghar (place of worship for Vaishnavites in Assam) was also taken away by the river," she said with tears in her eyes.

Dhananjoy Bayan too turned emotional speaking about the village, which is his birthplace and where he had spent his childhood.

"My forefathers had lost their farmland due to the erosion. We were making a living by cattle farming. I used to get 15-20 litres of milk per day which I sold in the market at Barpeta to meet my daily needs. But this time, the flood has taken everything. My livestock is gone. I don't know how I am going to survive," he said. 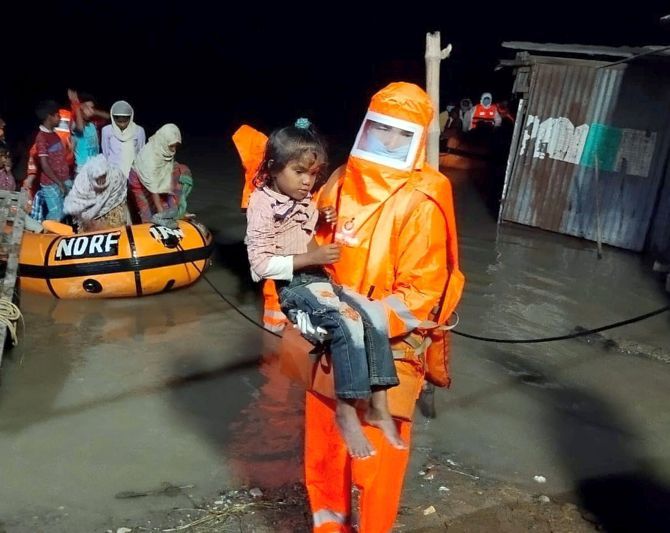 His brother Kulen has taken shelter on an embankment with his cattle.

He said the herd has not got proper feed for days even though the district administration officials have claimed that enough foodgrain has been distributed for both men and animals.

Sabur Khan, who is a daily wage earner and a seasonal fisherman, said he is clueless how to earn his living once the flood water recedes as this year's deluge has been very severe and has destroyed everything in the village.

"I do not have any cattle nor any cropland. After this flood, my family has to starve. This Brahmaputra has finished our life... It is inexplicable pain to leave one's birthplace and live in a tent on an embankment," he said.

Mridul Pathak said the village has become almost inaccessible from Barpeta town as a dilapidated wooden bridge between Suha and Oumura villages has to be croseed.

"There is no option but to take that bridge. No vehicles can pass through it and many people have been hurt due to accidents on it. Even the sick have to be carried through the risky bridge to reach the hospital," he added. 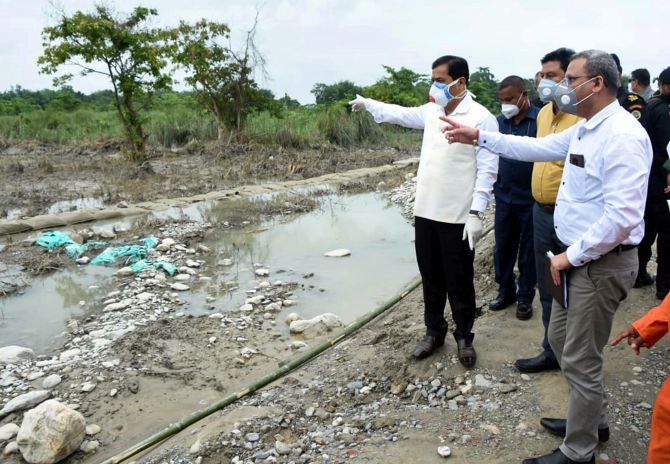 Pathak alleged that the authorities had "turned a deaf ear" to the villagers pleadings for a concrete bridge.

"We all know that today or tomorrow our village will cease to exist and we will lose our existence and identity," said Satyen Medhi, another inhabitant.

The flood prone area of the state as assessed by the Rashtriya Barh Ayog is 31.05 lakh hectares, which is about 39.54 per cent of the total land in Assam.

This is about 9.4 per cent of the total flood prone area of the country.

The flood prone area of the country as a whole stands at about 10.2 per cent of the total area, the water reources department said on its website.