The army was deployed in the restive Darjeeling town after Gorkha Janmukti Morcha supporters clashed with police, damaged police vehicles and set some of them ablaze as West Bengal Chief Minister Mamata Banerjee held a cabinet meeting in Darjeeling on Thursday. 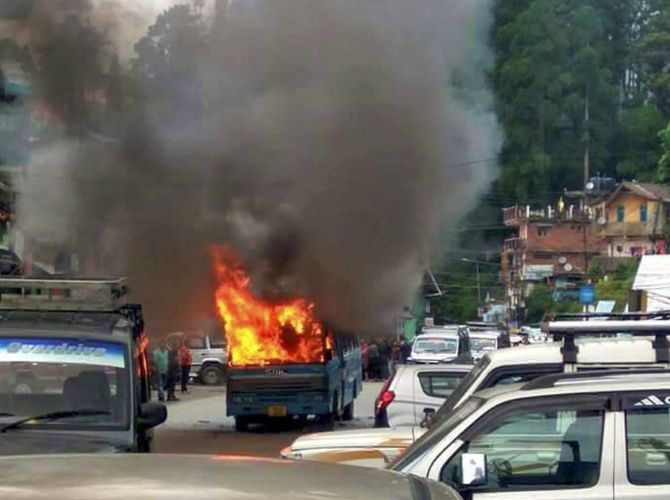 IMAGE: A state-government bus in flames after it was torched by Gorkha Janmukti Morcha supporters in Darjeeling. Photograph: PTI Photo

Police earlier fired tear gas shells and lathicharged GJM supporters who tried to march to the venue of the cabinet meeting to protest "imposition" of Bengali language in schools in the hills.

The hill town, which is at present full of tourists, had remained peaceful for several months as the GJM-spearheaded agitation for a separate state of Gorkhaland had taken a backseat.

Fresh violence erupted with the Bimal Gurung-led party calling a protest march towards the Raj Bhavan, where the cabinet meeting was taking place.

The GJM supporters tried to break the barricades put up by the police and hurled bricks at them. They also damaged a number of police vehicles and set some of them on fire, police sources said, adding that some security personnel were injured.

An army spokesperson said, "A requisition from the state government was received. Two Army columns (each consisting of around 80 personnel) based in Darjeeling have moved out."

GJM supporters were protesting among other issues alleged "imposition of Bengali language in the schools in the hills".

This is the first time that the chief minister is holding a cabinet meeting in Darjeeling. Banerjee said the state government would set up a new secretariat here.

The GJM supporters staged a dharna and raised slogans against the chief minister.

Shopkeepers at some places, including the Mall, downed shutters while the traffic came to a halt, causing inconvenience to tourists.

The GJM has accused the TMC government of trying to disrupt peace in Darjeeling by its "divide and rule policy" and called a 12-hour shutdown in the hills on Friday.

"The TMC is systematically trying to use police and its goons to disrupt peace in the hills. Today the police resorted to unprovoked baton charge and firing of tear gas shells," GJM general secretary Roshan Giri said.

"We condemn the state-sponsored violence. We have decided to call a 12-hour shutdown in the hills tomorrow. If the situation deteriorates further, then we may go for an indefinite shutdown," he said.

Giri said the GJM would never compromise on the fight for the identity of the people of the hills.

Asked about the GJM's agitation programme, the chief minister said, "They have the democratic right. Let them do it. They have no issue. Let there be competition for development."

On the GJM's opposition to the alleged "imposition of Bengali language" in schools in the hills, she said that Bengali was not made a compulsory subject.

"Rather, we gave recognition to Nepali language," she said.

"The people in the hill areas have been demanding development. Nothing had happened during the Left rule of 34 years, but things have changed after our government took over.

"We have done so many development works here. I am proud to say that I am the first chief minister to visit the hills for more than 100 times," she said.

Communist Party of India-Marxist state secretary Surya Kanta Mishra said, "The condition in the hills is a matter of grave concern. The Darjeeling policy of our chief minister is just a replica of the Kashmir policy adopted by our prime minister."

The Leader of Opposition in the Assembly, Adbul Mannan, accused Banerjee of betraying the people of the hills through false promise.

"What the chief minister has been doing in the hills for the last two years is nothing but a political gimmick. The Gorkhas are our brothers, they fight for the nation and sacrifice their life. The CM is using a divide and rule policy in the hills," he alleged.