Heightened vigil along the Line of Control has pushed terror groups and Pakistani establishments to send militants into India using tunnels dug under seasonal river beds along the International Border in the Jammu region, the army on Thursday told a group of 24 foreign envoys visiting Jammu and Kashmir. 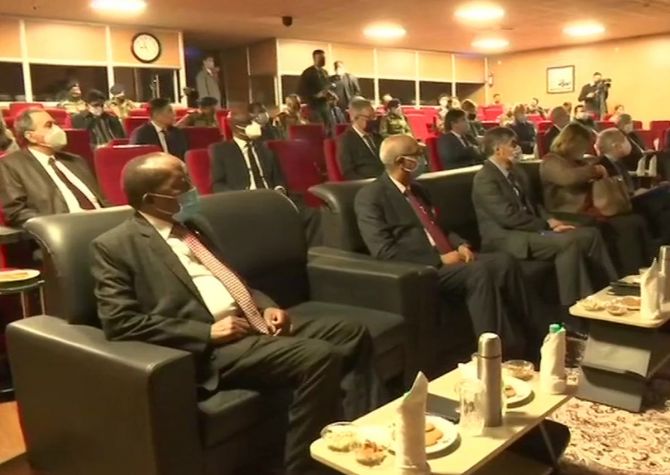 The envoys, including those from member states of the European Union and the Organisation of Islamic Cooperation, arrived in the union territory on a two-day visit on Wednesday to assess the development work and the security situation in Jammu and Kashmir, especially after the erstwhile state's special status was abrogated in 2019.

They were given a detailed presentation by senior Indian army officers on the role of the Pakistani army in helping cross-border infiltration and supplying arms, and instances of unprovoked ceasefire violation by the neighbouring nation.

The envoys were briefed by the officers at the strategically-located headquarters of the army's XV Corps, which overlooks the Kashmir Valley.

The officials said that after the army made certain changes to the Counter Infiltration Grid along the Line of Control, the Pakistani establishment has been using a network of natural caves and sometimes digging tunnels under seasonal rivers along the International Border in Jammu region's Samba sector to push terrorists into India.

Highlighting the techniques used by Pakistan-based terror groups for infiltration, they said the establishment across the border is engaged in providing all support to militants in spreading violence in the union territory.

It was mentioned that the terrorists, who masterminded a dastardly attack on CRPF personnel in Pulwama in 2019 that left 40 personnel dead, had also infiltrated into India through a tunnel in the Jammu region.

The officials told the envoys that despite foiling several attempts of infiltration along the LoC, the Pakistan army continues to run terror camps across the border and violate ceasefire to help terrorists to enter into the Kashmir Valley.

In order to reduce loss of life, the Pakistani establishment is airdropping weapons from across the border using drones. These drones can carry payloads of around 12 kilograms, the army officials told the foreign delegation, which includes four envoys from member countries of the OIC.

The envoys were shown seized weapons from terrorists having markings of the Pakistan ordinance factory, they said. 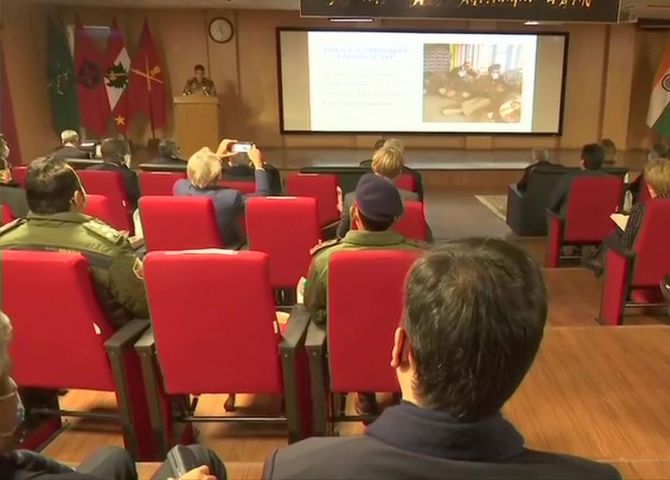 On the situation in the Kashmir Valley, the army officials highlighted Wednesday evening's incident in which a son of a prominent eatery owner was shot and critically wounded by terrorists at his shop in a high-security area of the city.

This was a part of the terrorists' game plan to silence either moderate voices in Kashmir or those who refused to follow their diktat, they said.

The army also gave a detailed briefing on how internet-warfare was used by Pakistani establishments to brainwash youngsters through social media platforms.

Coming to the situation post the abrogation of the special status of the erstwhile state of Jammu and Kashmir and its bifurcation into union territories of Ladakh and Jammu and Kashmir in 2019, the army officials said there has been no loss of life due to the action of security forces.

There has been a marked decrease in law and order problems and incidents of stone pelting have seen a sharp decline, the army officials told the visiting envoys, and also shared their experience during the recent District Development Council (DDC) elections, which were conducted successfully.

Besides terrorism and the situation along the LoC, the officials informed the envoys about the assistance being provided to people living in far-flung areas. They were also informed about the tourism sector in the Kashmir Valley and the achievements of the Kashmiri people in various fields.

Earlier, Superintendent of Police (Srinagar East) Sheema Nabi gave a presentation to the envoys about how the police dealt with challenges posed by the COVID-19 pandemic.

It was all about maintaining a balance between addressing people's problems and enforcing COVID-19 restrictions, she said.

Nabi said that humane touch and outreach helped the Jammu and Kashmir Police deal with the unprecedented challenges posed by the pandemic.