The Jamia Millia Islamia on Saturday declared vacation till January 5 and cancelled all exams in view of the tense situation in the university due to students' protest against the amended citizenship act. 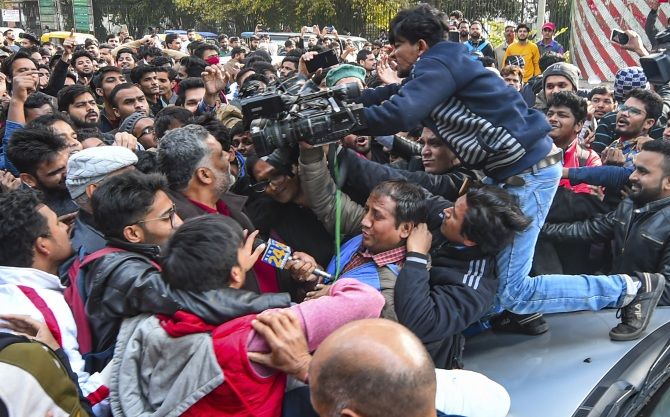 "All exams postponed. New dates to be announced in due course of time. Vacation declared from December 16 to January 5.

University will reopen on January 6, 2020," a senior university official said.

The university turned into a virtual battlefield on Friday when students and policemen clashed with each other as students tried to march to Parliament in protest against the legislation.

Earlier in the day, the university administration had announced postponement of exam scheduled on Saturday.

The students had called for a university lockdown on Saturday and had planned to boycott the exams to protest against the amended citizenship act and also against the Friday's violence following clashes with police during their march. IMAGE: Students injured in Friday's clash with the police show their injuries during a protest against the Citizenship (Amendment) Bill and NRC at the Jamia Millia Islamia. Photograph: Shahbaz Khan/PTI Photo

"We the exam in middle and cancelled it. Jamia will also raise voice if anything wrong happens to our nation. We have boycott the classes and exams. We will march again and again for our rights," said 25-year-old Nihal Ashraf.

Wajahat, 22, a student of BA Political Science, said, "On Friday, the Delhi Police brutally attacked us while we were marching and many students got injuries during the assault. They used baton and tear gas agaisnt students. We have boycotted the exam."

"Everyone wants to live. This is not Israel or Syria. We should learn from Bangladesh that how they killed the extremism and opted for an economic democracy. The government is not focusing on the main issues," said Pappu Yadav, another student. 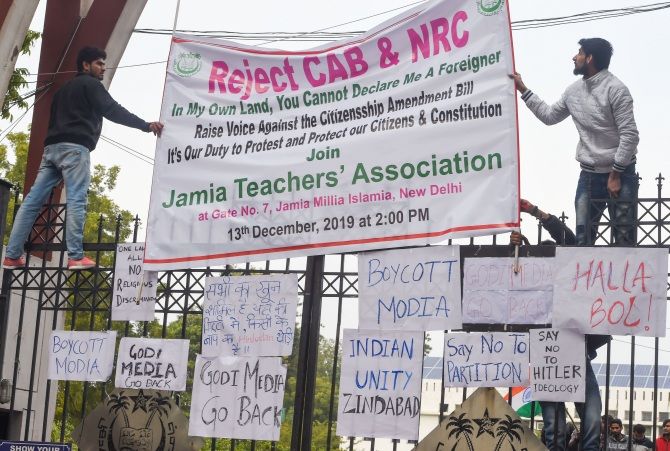 The Delhi Metro Rail Corporation on Saturday closed entry and exit gates at Janpath metro station in view of a protest at Jantar Mantar against the Citizenship (Amendment) Act.

"As advised by Delhi Police, entry & exit at Janpath has been closed. Trains will not be halting at this station," the DMRC tweeted.

On Friday also, entry and exit gates at Patel Chowk and Janpath metro stations were closed for over an hour owing to protests against the amended citizenship act.

The stations were closed following a Delhi Police advisory in view of the protest march by Jamia Millia Islamia students from the university campus to Parliament to express their opposition to the controversial legislation.