A large number of anti-Citizenship Amendment Act protesters, majority of them Muslims, held a massive protest against the amended Citizenship Act at Chepauk in Chennai, even as agitations were held across Tamil Nadu on Wednesday. 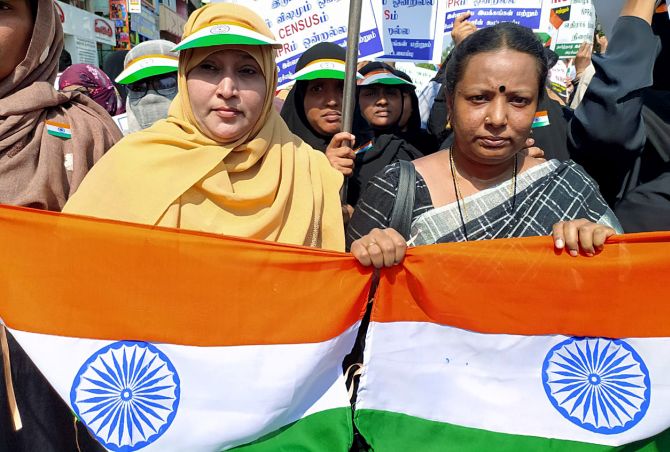 The protest was held under the aegis of the Tamil Nadu Islamia Iyakkangal Matrum Arasiyal Katchigalin Koottamaippu, a federation of state Muslim outfits and political parties.

Representatives from Dravida Munnetra Kazagham and other political parties also took part in the protest.

Meanwhile, as the demonstration was being held at Chepauk, Chief Minister K Palaniswami in the Assembly located inside the Secretariat, announced welfare measures for the Muslim community, including pension hike for 'Ulema' (Islamic scholars).

Earlier, in a massive show of strength, agitators came in swathes and converged at Chepauk, before taking out a brief march along the Wallajah road as part of their original plan to proceed to the state Secretariat and lay siege to the assembly.

However, the Madras high court had on Tuesday restrained the Muslim outfits from going ahead with their siege protest.

SEE: People march towards the State Secretariat from Walajah Road

The outfits have been demanding that the state assembly, dominated by the All India Anna Dravida Munnetra Kazhagam, adopt a resolution against the Citizenship Amendment Act in the ongoing session which concludes on Thursday.

SEE: Protesters sing the national anthem during the march towards the State Secretariat

Agitators were seen carrying placards against CAA, National Register of Citizens and National Population Register, besides the Indian flag and raised slogans against the amended citizenship law. 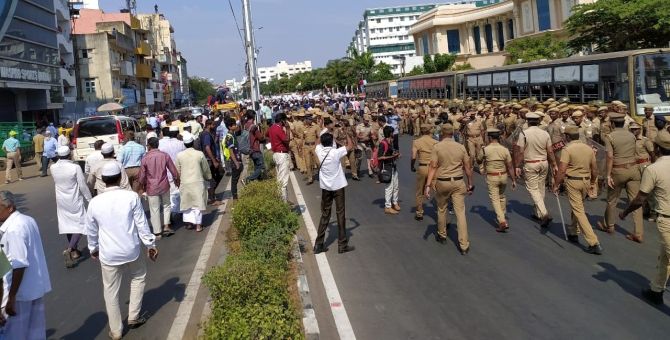 Scores of Muslim women, many of them burqa-clad, joined the agitation.

The protest resulted in traffic snarls at key points along the arterial Anna Salai, even as police had set up roadblocks and sealed off roads leading to the Secretariat as part of beefed up security measures.

The Secretariat, the state's seat of power, was brought under a stricter vigil, with more police personnel deployed at the historic Fort St George to prevent any untoward incidents.

Anti-CAA protests were held elsewhere in the state, including Madurai, Thanjavur, Cuddalore, Coimbatore, Tirupur and Tirunelveli, with members of the Muslim community hitting the streets against the Citizenship Amendment Act.