Samajwadi Party workers clashed with police in several parts of Uttar Pradesh on Tuesday after the state government clipped the wings of their president Akhilesh Yadav, preventing him from flying to Allahabad on the grounds of law and order. 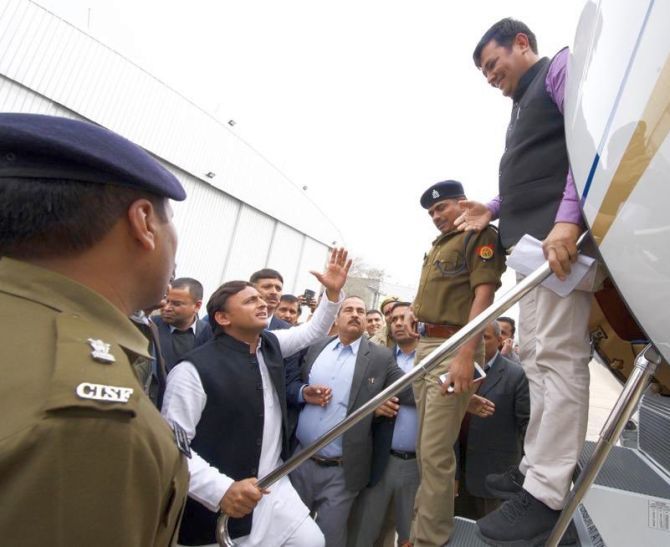 Protests broke out in Allahabad, Jaunpur, Jhansi, Kannauj, Balrampur, Jalaun, Azamgarh and Gorakhpur, among other places, where SP supporters smashed windscreens of vehicles and clashed with the police. Roads were blocked in Gorakhpur.

Yadav said he was stopped by authorities at the Lucknow airport in a bid to prevent him from visiting Allahabad, triggering outrage by party lawmakers in the state legislature and workers outside the airport.

The issue rocked the Rajya Sabha as SP and other opposition parties protested over the incident, disrupting the proceedings of the House.

The matter also caused an uproar in both Houses of the Uttar Pradesh legislature.

Chief Minister Yogi Adityanath told reporters that Yadav's visit could have triggered violence between rival student groups at the university. 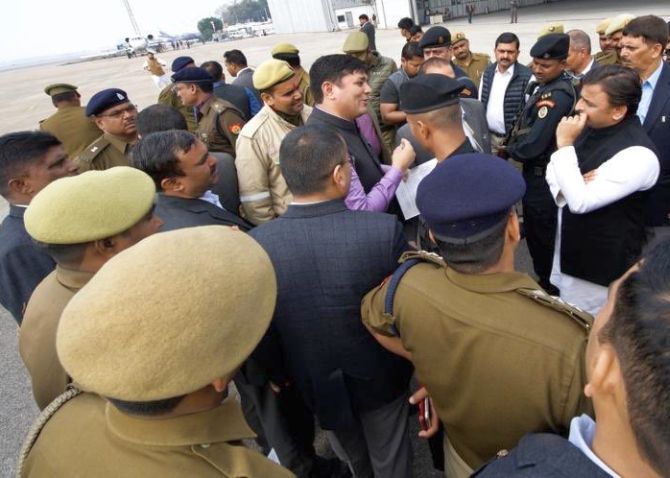 As soon as Samajwadi members came to know that Yadav was stopped at the airport, they raised the matter during the Question Hour in the assembly.

"The present regime is trying to kill democracy and stop our leader from visiting Allahabad," party leader Narendra Verma alleged.

The members also trooped into the Well of the House, prompting Speaker Hriday Narain Dixit to adjourn proceedings for 20 minutes.

It was later extended for the entire Question Hour and then for the day.

Bahujan Samaj Party leader Lalji Verma also supported the SP members, saying, "There is an anarchic government in the state which wants to suppress the voice of opposition."

Responding to the issue, Parliamentary Affairs Minister Suresh Kumar Khanna said, "The district magistrate informed him (Yadav) not to visit Prayagraj as it could create law and order problems."

He alleged SP and BSP members 'throttled democracy by not allowing the House to function'. 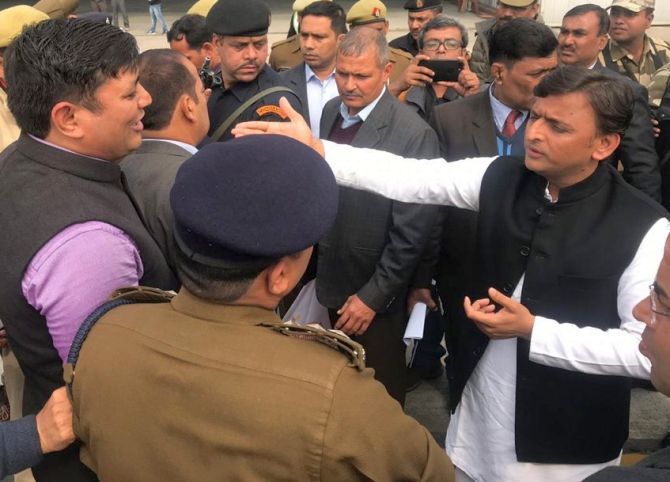 Amid all this high drama, Yadav kept tweeting that he was 'prevented from boarding the airplane without any written orders'.

'It is clear how frightened the government is by the oath ceremony of a student leader. The BJP knows that youth of our great country will not tolerate this injustice anymore!' Yadav tweeted.

The former Uttar Pradesh chief minister said he was to fly to Allahabad from Chaudhary Charan Singh International Airport to attend an event at Allahabad University.

He posted photographs on his official Twitter handle in which he was seen talking to police officers inside the airport.

The issue also generated heat outside the Vidhan Bhavan. Agitated SP workers gathered outside the assembly complex in the heart of Lucknow to protest.

Many of them, wearing red caps, also rushed to the airport. 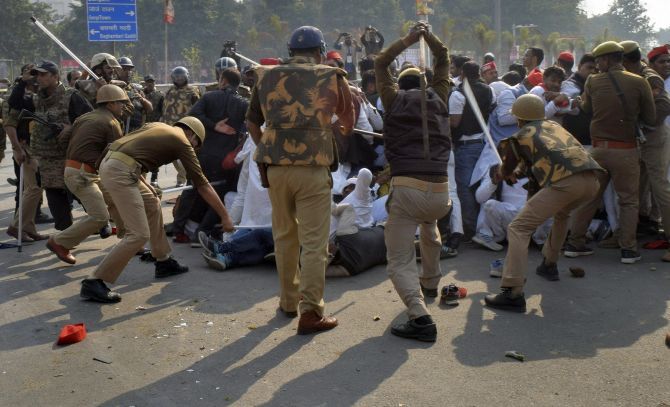 Agitated SP legislators also sat on dharna outside Raj Bhawan against the 'undemocratic behaviour' of the Bharatiya Janata Party government after staging a noisy protest in the UP legislature.

They relented when Governor Ram Naik sent a message to them that he would meet their delegation on Wednesday.

Principal Secretary (Home) Arvind Kumar said the university administration did not permit any political programme on the campus fearing breach of peace.

"Due to Kumbh, there is a huge congregation in Prayagraj. The district administration had intimated the ex-CM's office and Lucknow DM about the university decision," he said. 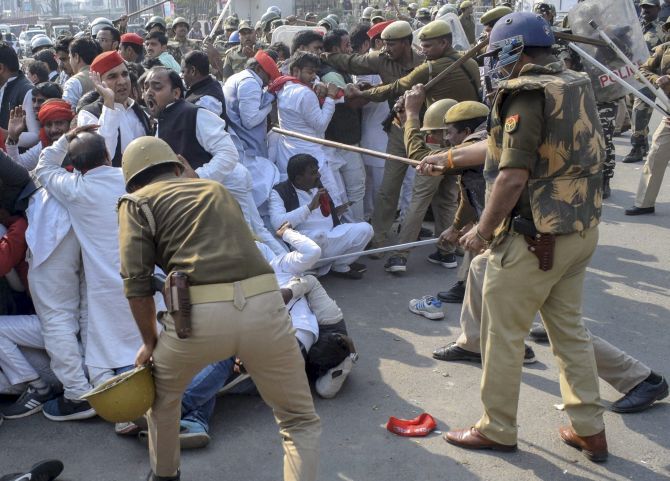 Addressing a hurriedly convened press conference, Yadav alleged that the Centre was 'involved' in stopping him at the airport here and preventing him from flying to Allahabad.

"I think the government at the Centre is also involved in stopping me. State police cannot enter airport as its security is in Centre's hand," he claimed.

He described Adityanath's comments that his visit could have triggered violence as 'a cover to hide nervousness' and said that stopping him showed how 'scared' the government is. 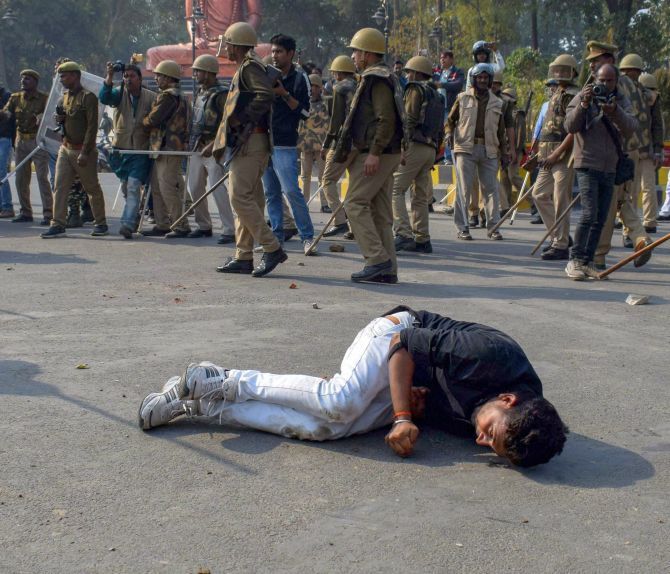 IMAGE: An injured Samajwadi Party worker lying on the road after a police action the party workers who were blocking a road during a protest over the party chief Akhilesh Yadav's detention, in Allahabad. Photograph: PTI Photo

In a statement earlier, he said the BJP has lost Uttar Pradesh, 'but more than an election, they have lost the faith that the youth of this country reposed in them'.

Extending support to Yadav, BSP chief Mayawati said the incident was extremely condemnable and asked whether the ruling BJP was afraid of their alliance because of which it is 'resorting to anti-democratic methods'.

She described the episode as 'an example of total dictatorship of BJP government'.

"This is very unfortunate and this undemocratic step will be fought at all levels," she said.

"Are the BJP governments at the Centre and in Uttar Pradesh so afraid of BSP-SP alliance that they are resorting to anti-democratic methods to curb our political activities," she asked.

The SP and the BSP recently forged an alliance for the upcoming Lok Sabha elections.