After reshuffle, new ministers get down to work

A day after being sworn-in, the new ministers took charge of their portfolios.

Here’s a look at the various new ministers on their first day at work. 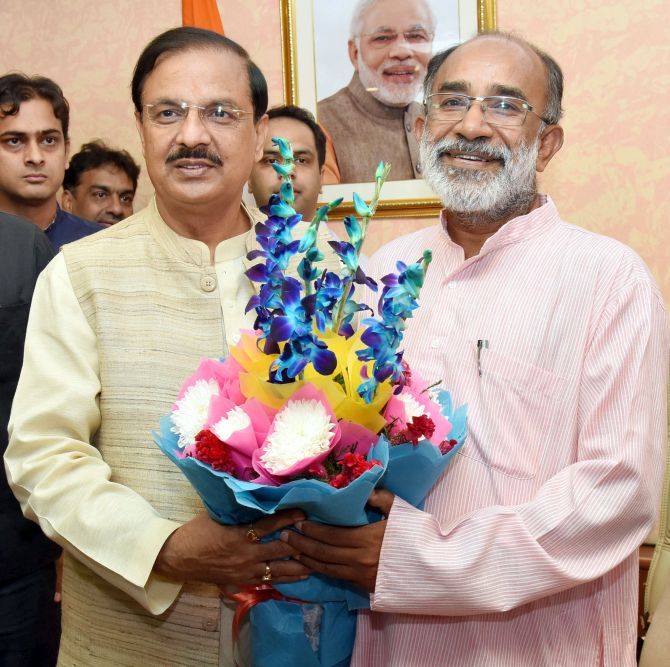 India’s new Tourism Minister Alphons Kannanthanam on Monday said his ministry had a “great role” to play in Prime Minister Narendra Modi’s dream of creating a new India where all citizens can live with dignity.

The bureaucrat-turned-politician, who was appointed as minister of state for tourism (independent charge) on Sunday, refused to sit in his designated chair, waiting for almost an hour for his predecessor, Dr Mahesh Sharma, to arrive and hand him charge of the ministry.

The camaraderie was evident as Sharma, who was in a meeting, walked in and the new inductee insisted that his predecessor claim the minister’s high backed chair.

“I am so grateful to Maheshji who has been a friend and well-wisher for a long time. He has done a fantastic job in tourism and culture and I am happy that I get to start where he left off,” he said.

“I am happy to be part of the PM’s dream of creating a new India where all Indians can live with dignity and the tourism ministry has a great role to play in this,” he said. IMAGE: Shiv Pratap Shukla taking charge as the Minister of State for Finance.

Shiv Pratap Shukla on Monday took charge as the Minister of State for Finance but declined to make any comment.

After taking the charge, he said it would be difficult to say anything as it was his first day in the position.

He replaces Santosh Kumar Gangwar, who has moved to the labour ministry.

Former Uttar Pradesh minister, Shukla brings with him a rich organisational as well as ministerial experience to the Union Cabinet. 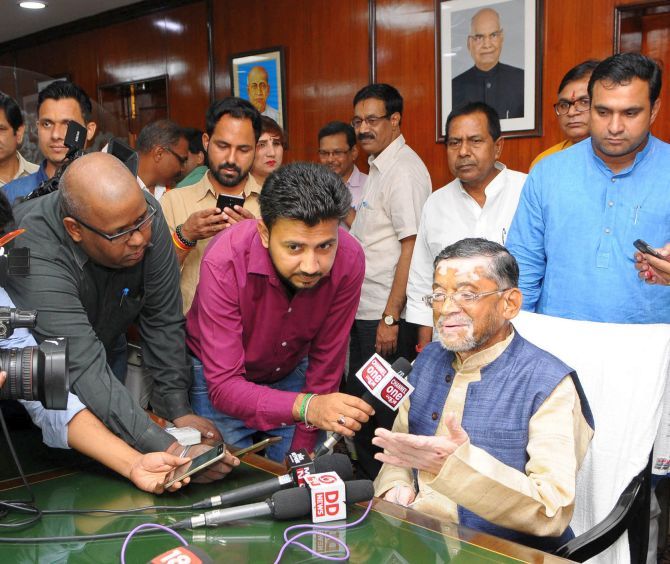 IMAGE: Santosh Kumar Gangwar interacting with the media after taking charge as the Minister of State for Labour and Employment (Independent Charge).

The labour ministry will continue consultations with all stakeholders on policy issues and expedite reforms by amending laws to create jobs, Union Minister Santosh Gangwar said.

On assuming charge as the Minister of State for Labour, he said the ministry will continue to hold tripartite consultations, involving government, unions and industry.

“We will work as per the need of the nation. We will take along all. In finance ministry also we talked about taking along all unions and not just Bharatiya Mazdoor Sangh (BMS),” he told reporters.

Gangwar was the Minister of State for Finance so far; in Sunday’s Cabinet reshuffle he was given independent charge of the labour ministry.

On trade unions’ allegations of being bulldozed and the government giving no heed to their demands and suggestions, the minister said: “We are positive towards all trade unions and we will take all of them along. I don’t think that there would be any issue regarding this.” 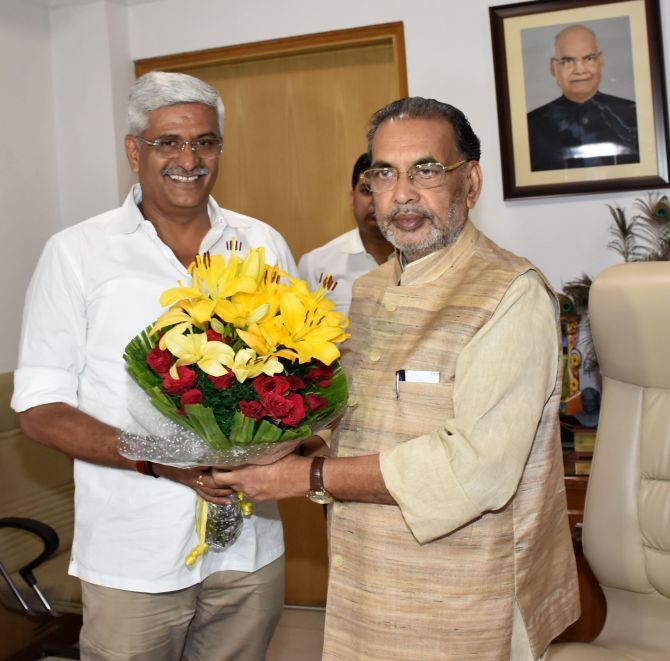 Gajendra Singh Shekhawat and Krishna Raj on Monday took charge as Minister of State for Agriculture and said their priority will be to achieve the government’s objective to double farmers’ income by 2022.

The agriculture ministry will now have three MoS along with Parshottam Rupala.

Raj was earlier the MoS for Women and Child Development while Shekhawat was a Member of Parliamentary Standing Committee on Finance.

“Krishna Raj is an experienced minister and Shekhawat has experience in the field of agriculture. We already have Rupala as MoS. With their help, we will achieve prime minister’s goal to double farmers’ income by 2022,” Agriculture Minister Radha Mohan Singh told reporters.

Talking to media, the newly-appointed Shekhawat said it is “our duty and priority to achieve PM’s target to double farm income by 2022”.

The minister said he will take stock of all the existing schemes from soil health to crop insurance and then decide on the focus areas.

“My ground-level experience to work in agriculture sector will help me a lot,” Shekhawat said. IMAGE: Ashwini Kumar Choubey taking charge as the Minister of State for Health and Family Welfare.

Ashwini Kumar Choubey, who assumed charge as the Minister of State for Health on Monday, said that enhancing awareness on public health and reducing people’s dependence on “medicines and needles” will be high on his agenda.

He stressed that cleanliness and good health were linked and vowed to take forward the Prime Minister Narendra Modi’s mission of a clean and healthy India with dedication.

“My motto will be to spread awareness about public health so that people’s dependence on medicines and needles is reduced,” Choubey said.

Terming as unfortunate the death of 49 infants in a month in the Farrukhabad district hospital in Uttar Pradesh, Chowbey said that the government will fight these challenges.