After 3 days, curfew relaxed in parts of Jammu

The authorities on Monday relaxed curfew for three hours in parts of the city where it was imposed on Friday following massive anti-Pakistan protests and sporadic incidents of violence over the terror attack in Pulwama district which left 40 Central Reserve Polcie Force personnel dead. 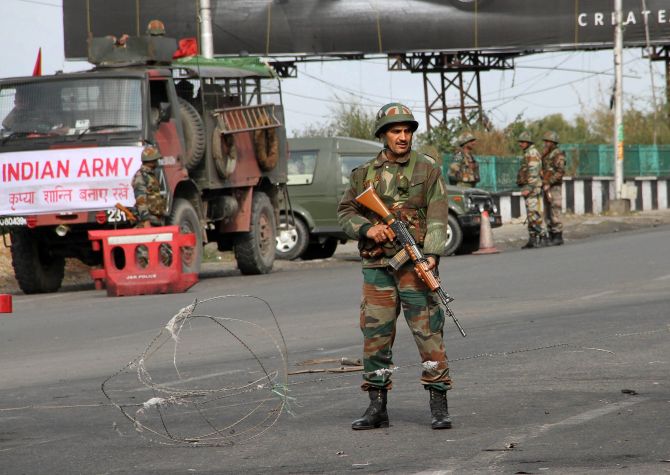 IMAGE: Army personnel stand guard at a road during the curfew in Jammu. Photograph: PTI Photo

The authorities urged the people to maintain peace and tranquility and do not allow the miscreants to create any trouble in their respective areas.

District Magistrate, Jammu, Ramesh Kumar while announcing relaxation in curfew in areas falling under five police stations of Jammu said prohibitory orders under Section 144 of the CrPC will remain in force in these areas as a precautionary measure to maintain law and order, he added.

"Curfew was relaxed in the areas falling under police stations of Gandhi Nagar (except police post Nehru Park and Digiana), Channi Himmat, Sainik Colony, Trikuta Nagar and Satwari (except police posts of Belicharana and Gadighat) from 2.00 pm to 5.00 pm today (Monday)," he said.

However, restrictions would be in place in these areas under Section 144 of the Code of Criminal Procedure on public gatherings, Kumar said.

He said official identity cards of the civil secretariat employees and the staff deployed with essential services would be treated as curfew passes to facilitate their movement in other curfew-bound areas.

In addition, he said, air tickets, railway tickets and admit cards for various examinations would also be treated as curfew passes.

The curfew remained in force in the city for the fourth consecutive day to maintain law and order.

All examinations, scheduled for the day, were postponed as educational institutions across Jammu city remained closed.

Over 150 people were taken into preventive custody over the past couple of days to ensure peace, officials said.

Earlier, Kumar said the situation was "well under control" and there was no report of any untoward incident from anywhere in the curfew-bound areas since Sunday.

Police, paramilitary forces and Army soldiers stand deployed and are strictly enforcing the curfew, he said. 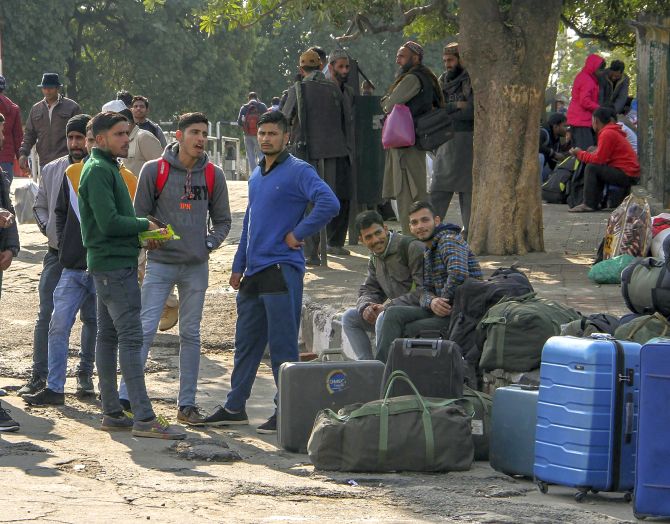 The Army has deployed 18 internal security columns of the Tiger Division along with air support from the White Knight Corps in the city, including Gujjar Nagar, Janipur, Shahidi Chowk, Talab Khatika, Sidhra and other sensitive areas.

"Helicopters and UAVs of the Army were also put into operation to monitor the situation. The proactive approach jointly taken by the J&K police, civil administration (divisional commissioner and district collector's office) and the Indian Army has ensured the situation is in control," a defence spokesman had said.

Mobile internet services continued to remain suspended as a precautionary measure to check spread of rumours but the BSNL broadband services are functioning normally.

The officials said all government-run and private schools of the Jammu province remained closed while examinations for Classes 8 and 9 and practical exams of Class 12, scheduled for the day, stand postponed.

A Jammu university spokesman said the teaching work in the varsity remained suspended in view of the prevailing situation and all examinations, both theory and practical, have been postponed.

The SKUAST-Jammu also postponed all internal examinations scheduled for the day, the officials said, adding that fresh dates for the exams will be notified later.