The Aam Aadmi Party on Wednesday won the Municipal Corporation of Delhi polls with 134 seats, ending the 15-year rule of the Bharatiya Janata Party in the prestigious municipal corporation and reducing the Congress to just nine seats in a house of 250. In his first address after the victory, an elated Arvind Kejriwal vowed to improve civic amenities in the national capital, and sought the "blessings" of the Centre and Prime Minister Narendra Modi to achieve that.

The BJP, which was predicted to suffer a massive defeat in exit polls, put up a spirited fight, winning 104 municipal wards, while the Congress managed to win just nine, down from 30 in the previous civic poll. Three independents also emerged victorious.

In his address to party workers at the AAP office, the chief minister said the civic body will be rid of "corruption and bribery". 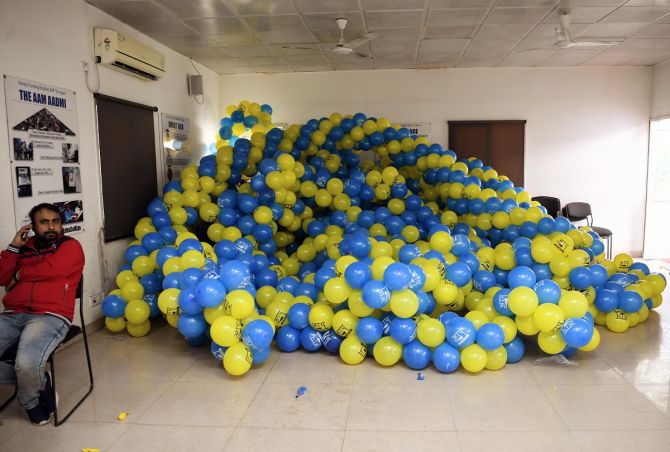 IMAGE: Ballons seen inside a room at AAP office amid counting of votes for Municipal Corporation of Delhi polls, in New Delhi. Photograph: ANI Photo

His deputy Manish Sisodia also thanked the voters of Delhi and said it was their mandate that helped the AAP defeat the "world's biggest and most negative party".

The counting of votes began at 8 am at 42 centres across Delhi amid tight security, and initial trends was in favour of the BJP.

At one point, the BJP was leading in 107 seats and the Aam Aadmi Party in 95.

But as the counting progressed, the AAP went past the BJP and slowly consolidated the lead, finally winning 134 wards.

The BJP bagged 104 seats, thus not losing as badly as was predicted by the exit polls. 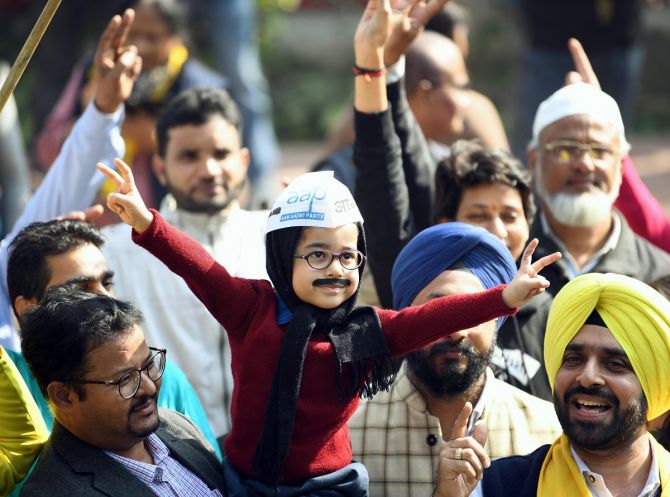 AAP Rajya Sabha MP Sanjay Singh said the barely 10-year-old party has "defeated" the largest party of the country (BJP) in their stronghold.

"The results have once again proved the AAP is a hardcore honest party," he said.

Singh also said the results were remarkable considering the BJP had gone all guns blazing, deploying all its top leaders, including 17 central ministers, for campaigning.

Delhi BJP president Adesh Gupta said, "Despite 15 years of anti-incumbency, our performance is better. We worked for the people of Delhi at the municipal corporations but may be some people were not happy. There was no anger against the BJP though."

The mood at the AAP's office on Rouse Avenue was celebratory since morning with patriotic songs blaring through loudspeakers and the entire premises decked up with colourful balloons.

As the pendulum swung in the AAP's favour, celebrations picked up with supporters carrying party flags distributing sweets and dancing to the beat of drums. IMAGE: Police personnel stand outside the AAP office during the counting of votes for the MCD polls, in New Delhi, December 7, 2022. Photograph: ANI Photo

Supporters and leaders, including Gopal Rai, Atishi and Durgesh Pathak, started gathering at the office as counting progressed and numbers swung in favour of the AAP.

Hoardings reading acche honge 5 saal, MCD mein bhi Kejriwal (next five years will be good as Kejriwal has come in the MCD)' lined the street outside as supporters revelled to the AAP's official poll song MCD mein Arvind Kejriwal.

Addressing AAP workers at the party office, Kejriwal batted for positive politics in the country to ensure India becomes number one country in the world.

With defeat in the MCD polls, the BJP's 15-year rule at the civic body came to an end. The defeat will also dent the BJP's efforts to weaken the AAP's political dominance in Delhi, and harm its chances in the 2025 assembly polls.

The party ruled Delhi for 15 years under the chief ministership of Sheila Dikshit, but ceded its space to AAP after 2013.

The party failed to win a single seat in Delhi in two Lok Sabha polls and as many Assembly elections between 2014 and 2020.

The BJP trounced both the AAP and the Congress by winning 181 of 272 wards of the three municipal corporations in the 2017 elections.

The AAP in its civic polls debut won 48 and the Congress 30 wards.

Earlier this year, the Centre merged the three municipal corporations into MCD having a total 250 wards.. 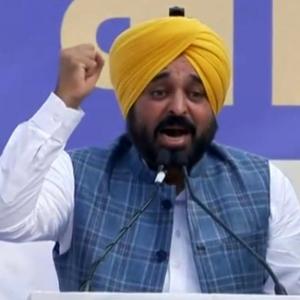 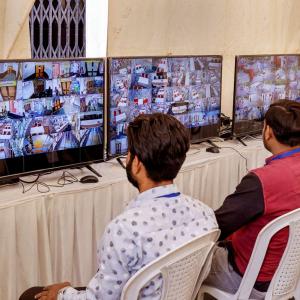