Foot-tapping music and soulful classical renditions rent the air as Republic Day celebrations culminated with the Beating Retreat ceremony in New Delhi where President Pranab Mukherjee rode the ceremonial buggy down the Raisina Hill on Sunday for the last time during his tenure. 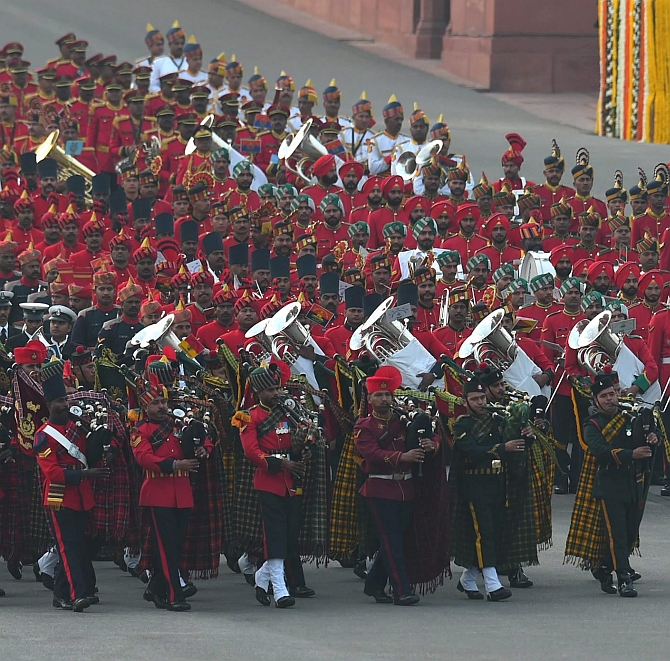 The ceremonial event at the Vijay Chowk this year saw 16 military bands, 16 pipes and drums bands from regimental centres and battalions enthralling the crowd, with clear sky and relatively warmer weather adding to the august atmosphere. 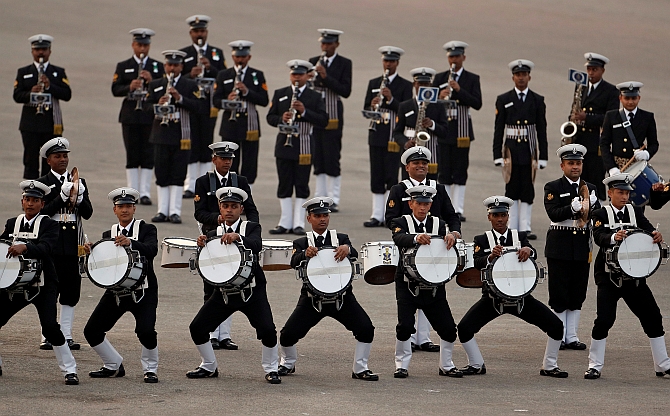 Several performances by Army, Air Force and Naval bands, among other troupes, thrilled the audience with patriotic fervour, which cheered loudly in the backdrop of a delightful twilight. 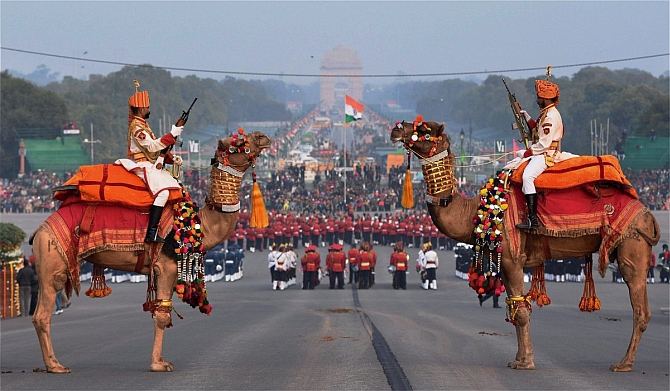 The function began with President Mukherjee arriving at the venue in the ceremonial buggy, last time as the Head of State with his tenure ending this year.

He drew cheers from the audience as the wheels of the open gold-plated carriage rolled down the Raisina Hill, making its way past hundreds of spectators who gathered to witness the colourful event. 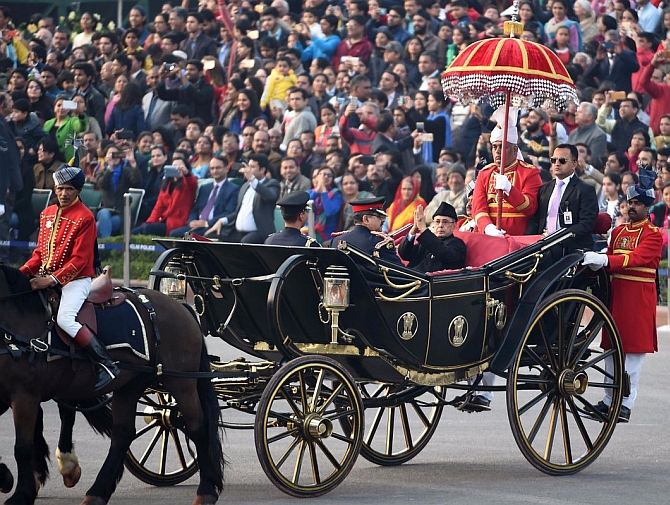 Mukherjee, the chief guest of the function and the Supreme Commander of the armed forces, reciprocated the greetings with his customary wave at the audience. 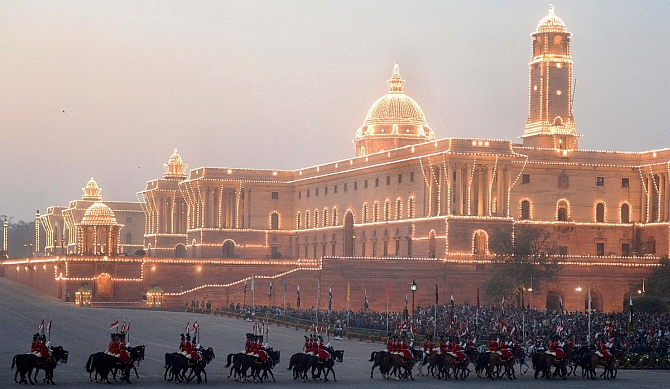 Mukherjee assumed office in 2012 and during the 2014 Beating Retreat ceremony, the buggy was brought back, three decades after its discontinuation at public functions due to security reasons. However, in 2015 the President had arrived in his limousine. 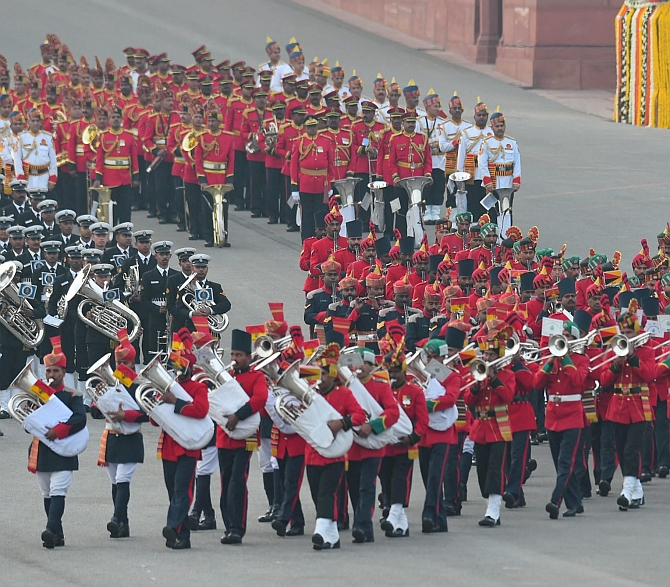 'Beating Retreat' marks a centuries-old military tradition, when the troops ceased fighting, sheathed their arms and withdrew from the battlefield and returned to the camps at sunset at the sounding of the Retreat. Colours and Standards are cased and flags lowered.

The combined pipes and drums bands mesmerised the gathering with soulful strains of 'Mony Musk', 'Jak Wilson', 'The Gael' while the tri-services military band with accompaniment of Indian instruments regaled with 'Yaman', 'Sky Lark' and other renditions.

The ceremony traces its origins to the early 1950s when Major Roberts of the Army indigenously developed the unique ceremony of display by the massed bands. 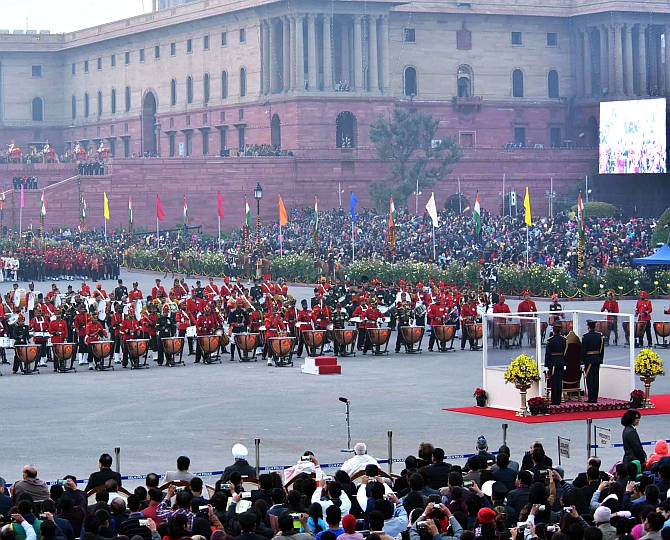 The band members, in their red, olive green, orange and navy blue uniforms, played as the tunes blended into each other for an hour before the flag was lowered amid retreat by buglers.

As the North Block, South Block, Parliament House and Rashtrapati Bhavan lit up in unison, the resplendent sight was greeted by a collective gasp from the audience. 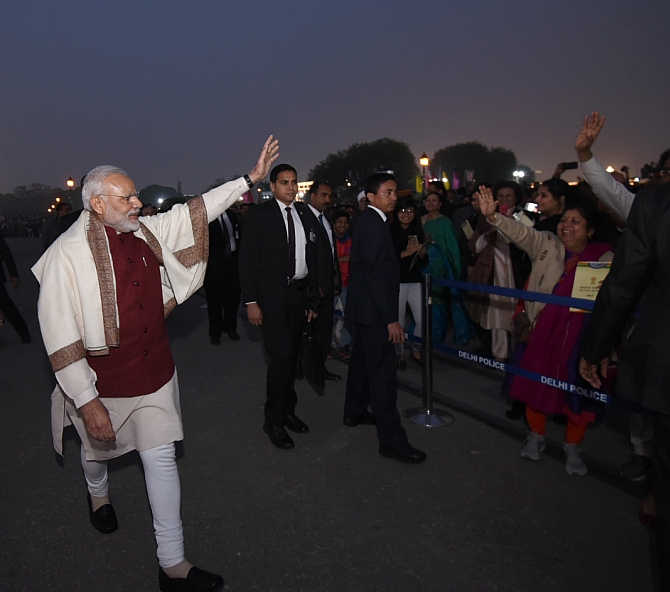 The carriage, driven by six horses was used by the Viceroy during the British rule.

After the event, Prime Minister Modi took a walk around the Vijay Chowk and greeted crowd on the occasion, which reciprocated with loud cheers. 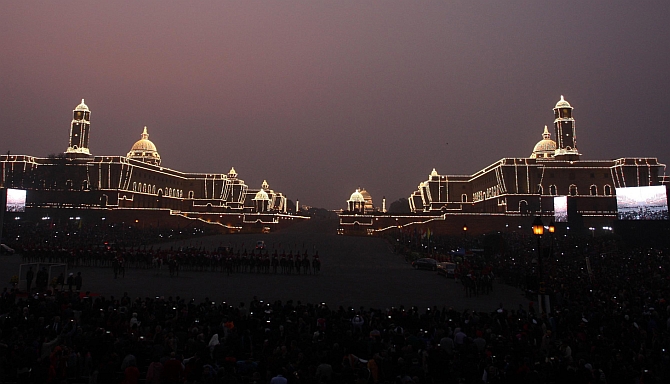 Amid the strains of 'Sare Jahan Se Achha' by the Buglers, the ceremony came to a dazzling end. 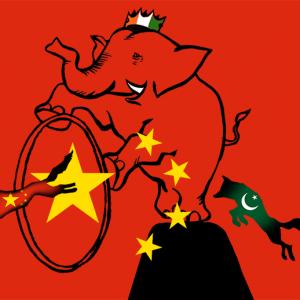 R-Day musings: Why India needs to behave like an elephant