A lady mason, a centenarian athlete, Jharkhand's lady Tarzan and a "mushroom mahila" were among the 15 women awarded the Nari Shakti Puraskar by President Ram Nath Kovind for their contribution in acting as game changers and catalyst of positive change in the society. 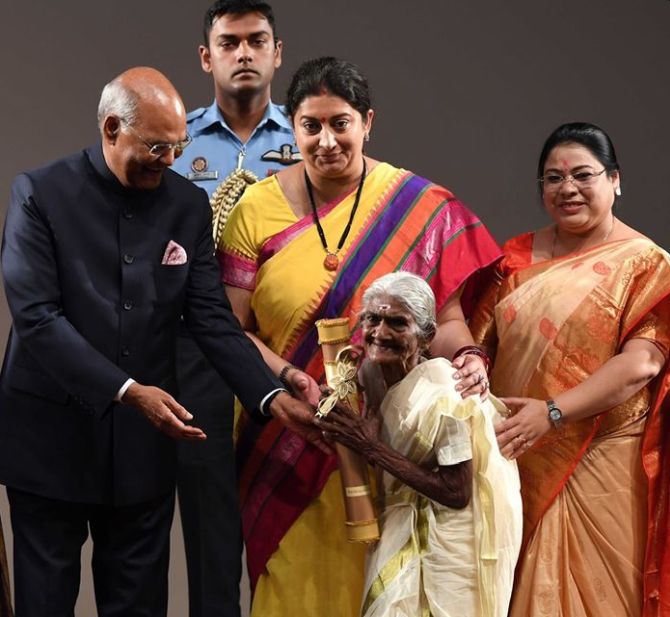 The government confers the Nari Shakti Puraskar every year to recognise the relentless service of women towards the cause of women empowerment and social welfare.

The winners for the year 2019 are from fields as diverse as agriculture, sports, handicrafts, afforestation and wildlife conservation, armed forces and education.

Bina Devi, fondly known as 'Mushroom Mahila' for popularizing mushroom cultivation, was one of the awardees. Devi, 43, is a mushroom grower and was 'sarpanch' of Dhauri Panchayat, Tetiabamber block for five years. She has trained farmers on mushroom farming, organic farming, vermin-compost production, organic insecticide preparation at home. 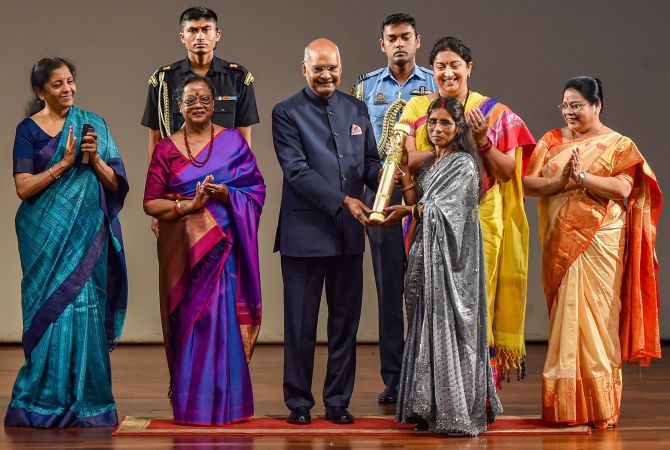 She has been awarded for popularising mushroom production in five blocks and 105 neighbouring villages in Munger district, impacting 1,500 women. She has been involved in spreading digital literacy and was awarded for training 700 women on how to use mobile phones by Tata Trusts.

Another awardee was 103-year-old Mann Kaur. Known as 'Miracle from Chandigarh', Kaur started her athletic career at the age of 93.

She won four Gold (Track and Field) at World Masters Athletic Championship, Poland and has set a record by becoming the world's fastest centenarian at the American Masters Game, 2016.

She has been associated with Fit India Movement and is the oldest person to walk along the top of Auckland's Sky Tower (2017). 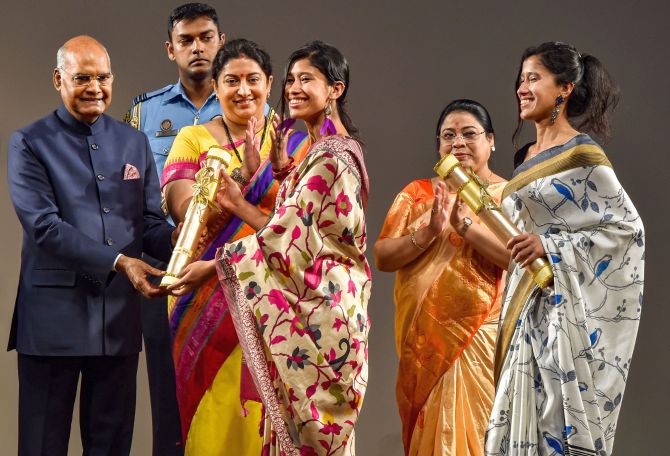 The award was also conferred on Kalavati Devi, a 58-year-old lady mason, who acted as a driving force towards reducing open defecation in the district of Kanpur.

She is responsible for building over 4,000 toilets in villages in and around Kanpur and has gone door to door to create awareness about the ills of open defecation.

Padala Bhudevi, 40, has been working for the development of tribal women, widows, Podu lands through a community based organization- CAVS (Chinnai Adhivasi Vikas Society), established by her father, in 1996. She was awarded for training 30 women in making mehendi cones and hair care products. 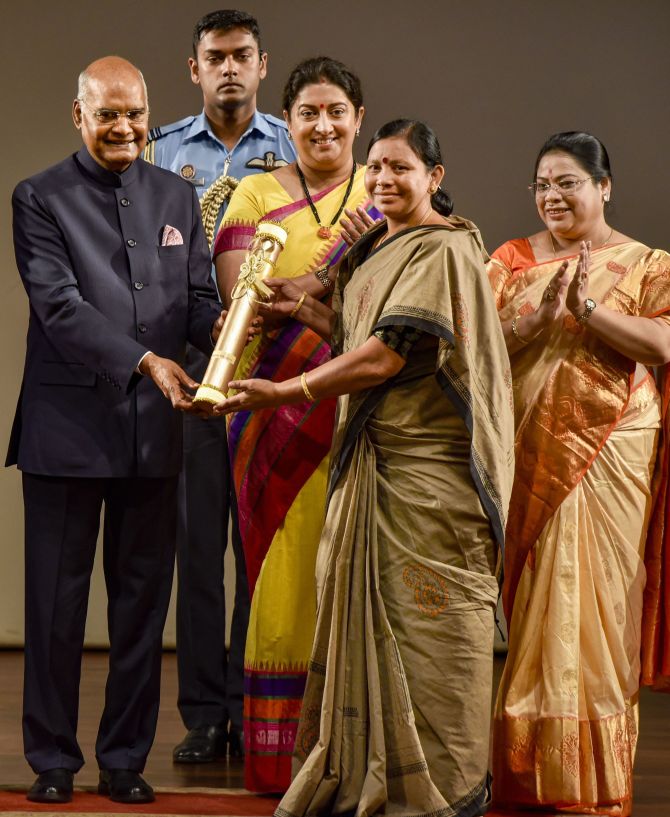 Despite being forcefully married at the age of 11 years, facing mental and physical torture from husband and in-laws, Padala Bhudevi has come a long way, single handedly raising three daughters and successfully motivating women to participate in agri-entrepreneural activities

Arifa Jan, 33, was awarded for reviving the lost art of Numdha handicrafts and has trained more than 100 women in Kashmir. She has employed 25 Kashmiri craft people and increased wages of her employees from Rs 175 to 450.

Chami Murmu, 47, has been awarded for her work as a passionate environmentalist. Fondly known as the 'Lady Tarzan' of Jharkhand, Murmu has been involved in planting of more than 25 lakh trees with the Forest Department and mobilising more than 3,000 women. 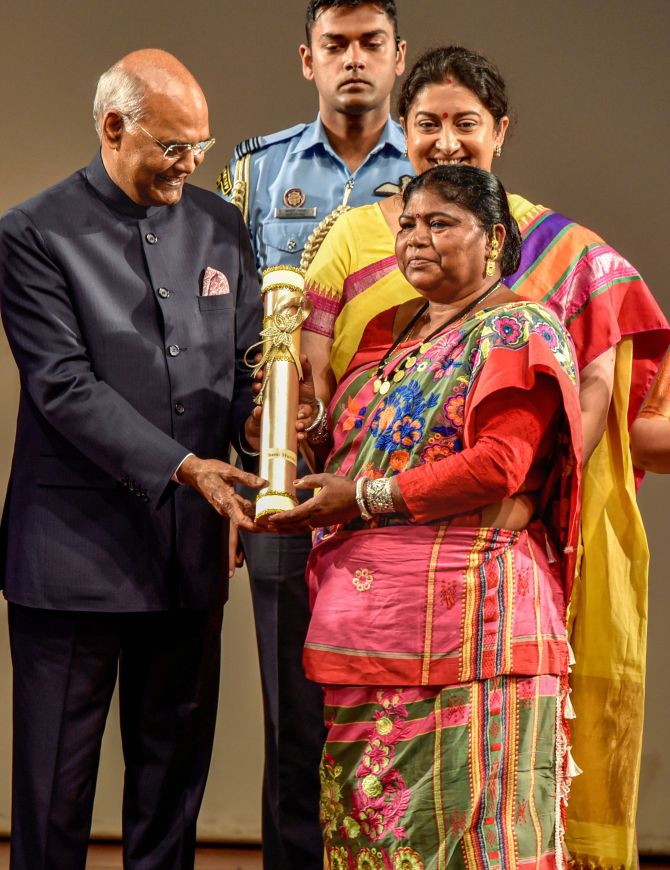 IMAGE: Chami Murmu receives Nari Shakti Puraskar 2019. Murmu, a resident of Bhursa village in Jharkhand is known as the Lady Tarzan of Jharkhand for her determination to protect the forests, local wildlife and improve the livelihood of locals. Photograph: Manvender Vashist/PTI Photo

She has actively worked towards protecting local wildlife by saving forests from tiber mafia and Naxalites.

Nilza Wangmo, 40 is an entrepreneur, running Alchi Kitchen Restaurant, the first one to serve traditional Ladakhi cuisines including some exquisite and forgotten recipes. She has trained 20 women from remote areas of Ladakh who manage the restaurant and has represented Ladakhi recipes in 5-star hotels in India. 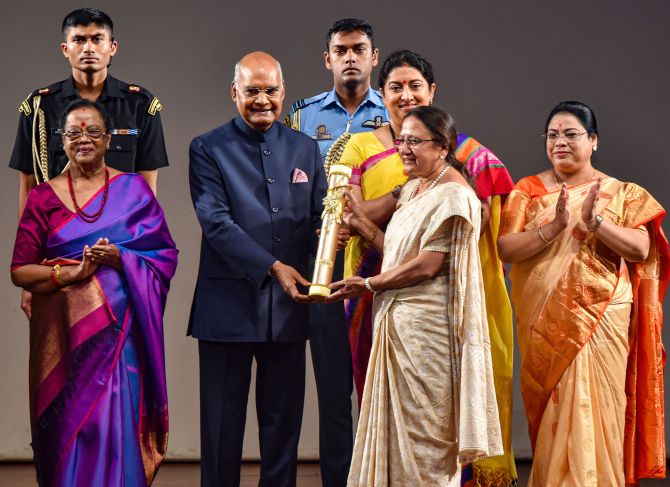 IMAGE: Automotive and R&D professional Rashmi Urdhwardeshe has been the Director of the Automotive Research Association of India founded in 1966 by the Indian Automotive Industry with the support from Government of India. Photograph: Manvender Vashist/PTI Photo

She has also been involved in charitable works with People's Action Group for Inclusion and Rights, a movement to create prejudice-free society and sponsored girls' education.

Another awardee is Rashmi Urdhwardeshe, 60, who is automotive and R&D professional since 36 years. Since 2014, she has been the Director of the Automotive Research Association of India which was founded in 1966 with the support from the government. She has rich experience in the fields of automotive R&D, testing and homologation, framing of test standards and regulations.

She contributed towards emission measurements under which the first ever emission laboratory was formed in India. 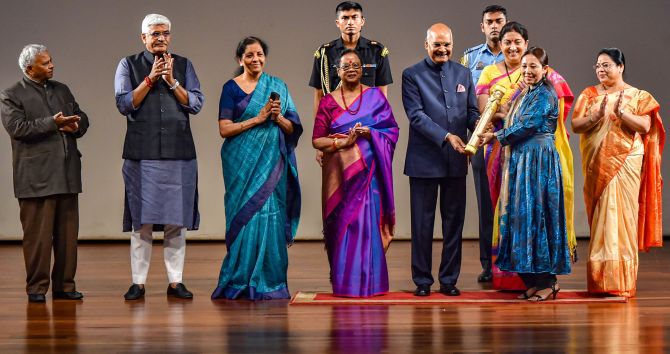 IMAGE: Entrepreneur Nilza Wangmo is an entrepreneur who is running Alchi Kitchen restaurant. Today, due to her efforts, Ladakhi cuisine is reaching the world. Photograph: Manvender Vashist/PTI Photo

Tashi and Nungshi Malik, 28, from Uttrakhand were the first female twins to scale Mt Everest in 2013. They have scaled Mount Kilimanjaro, Africa in 2015 and Mount Vinson, Antarctica in 2014, Puncak Jaya in Australia in 2014 and Mount Elbrus in Europe in 2013.

Kaushiki Chakroborty, 38, is an Indian classical vocalist with more than 15 years of experience, and she is Khayal and Thumri exponent. 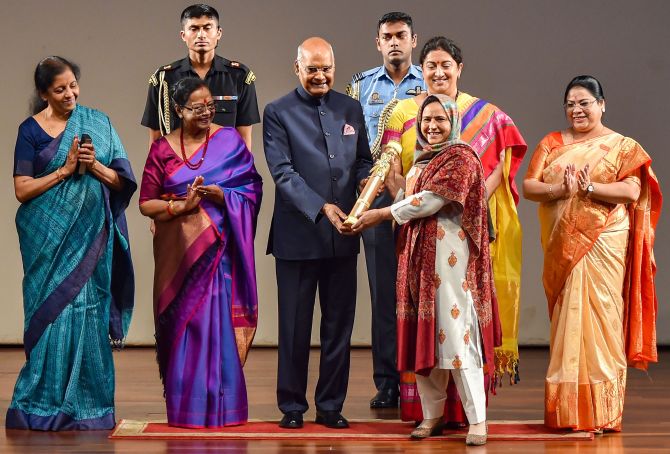 Avani Chaturvedi, 26, Bhawanna Kanth, 27, Mohana Singh Jitarwal 28, were the Indian Air Force's first women fighters. The trio was induced into IAF fighter squadron after the government decided to open the stream for women on experimental basis. They became the first Indian women pilots to take a solo flight in a MIG- 21 in 2018. 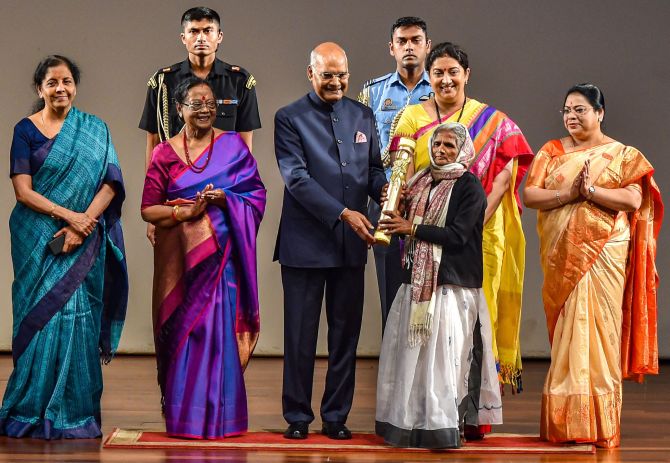 IMAGE: Kalavati Devi, a lady mason, has been a driving force towards reducing open defecation in the district of Kanpur. She is responsible for building more than 4000 toilets in villages. Photograph: Manvender Vashist/PTI Photo

At 105 years, Bhageerathi Amma is the oldest literacy equivalent learner under Kerala State Literacy Mission. She had to quit education to take care of her siblings when she was younger.

She bagged the first rank and scored 98 per cent marks. She said she aspires to clear tenth standard equivalent examination when she turns 100 and also acquire computer skills. 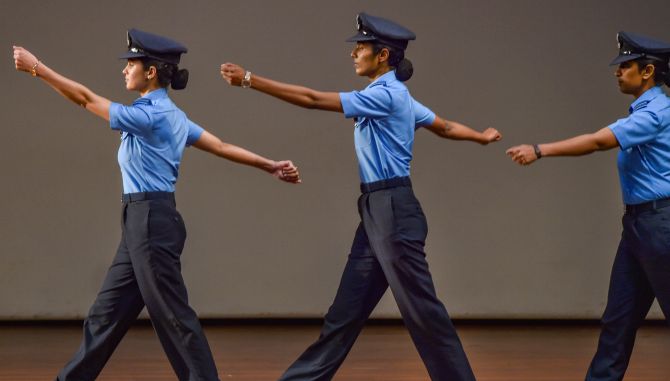