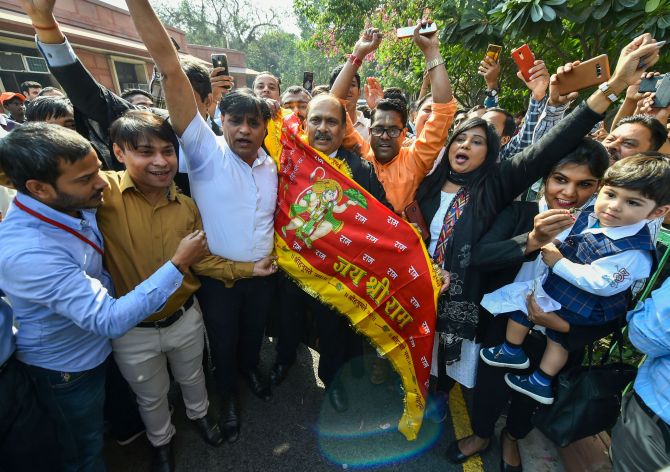 IMAGE: An advocate, displaying a scarf with a picture of Lord Hanuman with 'Jai Shri Ram' written on it, shouts slogans along with others in the Supreme Court complex after the pronouncement of Ayodhya case verdict, in New Delhi, on Saturday. Photograph: Arun Sharma/PTI Photo

Legal luminary and two-time Attorney General of India K Parasaran was the lead counsel for the Hindu parties in temple-mosque land dispute in Ayodhya and he successfully argued for possession of the entire disputed land in the Supreme Court in favour of the deity 'Ram Lalla Virajman'.

During the hearing, the 92-year-old senior lawyer had told the apex court that it must do 'full and complete justice' in all matters before it and that his last wish before he died was to finish the case.

Sitting in the front row, he listened to Chief Justice of India Ranjan Gogoi pronouncing the historical verdict. As soon as the verdict was over, lawyers from the Hindu side surrounded him and congratulated but the nonagenarian jurist held back his emotions.

Minutes later, helped by his juniors, he emerged out of the courtroom and allowed people to click his photographs on their mobile phones.

An erudite Hindu scholar who often quoted from Hindu scriptures in his arguments, Parasaran was referred to as the 'Pitamaha' (grandfather) of the India Bar by Supreme Court judge and former chief justice of Madras high court Sanjay Kishan Kaul for his contribution to the law without compromising with his 'dharma'.

He had also appeared for the Nair Service Society, in the Sabarimala case, to defend the ban on the entry of menstruating women in the temple.

He started practising in the top court in 1958.

In 1985, he had advised the government as the Solicitor General, against acting on the show-cause notice issued to demolish the Indian Express building as it was legally untenable.

When the Indira Gandhi government ignored his opinion, he refused to defend the government in court and offered to resign. Despite this, he was promoted as the Attorney General by the government.

'Senior Parasaran', as he is referred to in legal circles, had also come to the rescue of Priyanka Gandhi in a family court at Tis Hazari in 1997.

In the case, a man, later found mentally unstable, had petitioned the court, days before she was to get married to Robert Vadra, claiming that Priyanka was already married to him.

He had defended the National Judicial Appointments Commission as a member of Rajya Sabha in 2014.

Born in Tamil Nadu's Srirangam in 1927, Parasaran's father Kesava Aiyengar was a lawyer and Vedic scholar who practised at the Madras High Court and the Supreme Court. Parasaran's three sons, Mohan, Satish and Balaji, are also lawyers.

Mohan Parasaran served as the Solicitor General in the UPA-II government and now the fourth generation of the Parasarans are also in the legal profession. 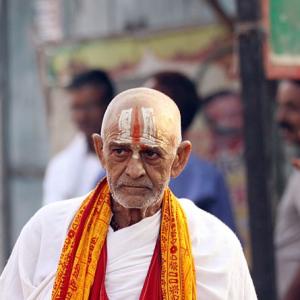