Communist Party of India-Marxist veteran Pinarayi Vijayan, who led the Left Democratic Front (LDF) to an unprecedented consecutive victory in the April 6 assembly polls, on Thursday took oath as chief minister of Kerala for the second time along with 20 ministers. Governor Arif Mohammed Khan administered the oath of office to 77-year-old Vijayan and ministers in a low-key function at the Central Stadium here, which was held completely in accordance with the COVID protocol.

'Best wishes to my brother @vijayanpinarayi on his swearing in as @CMOKerala and I hope that his determination and perseverance will lead to social equality, peace and prosperity for the people,' Stalin said in a tweet.

It is the Marxist veteran's second stint in the top office.

While the chief minister and 14 ministers took the oath and made solemn pledge, five took oath in the name of God.

Representative of the Indian National League in the CPI(M)-led ministry, Ahamed Devarkovil, took oath in the name of Allah.

The ceremony began after the Governor reached the venue at 3.30 pm and concluded at 4.50 pm.

Ahead of the swearing-in of the LDF government, Vijayan and minister-designates paid tributes to the martyrs of Punnapra-Vayalar uprising, a working class movement that occurred in Alappuzha district during the 1940s. 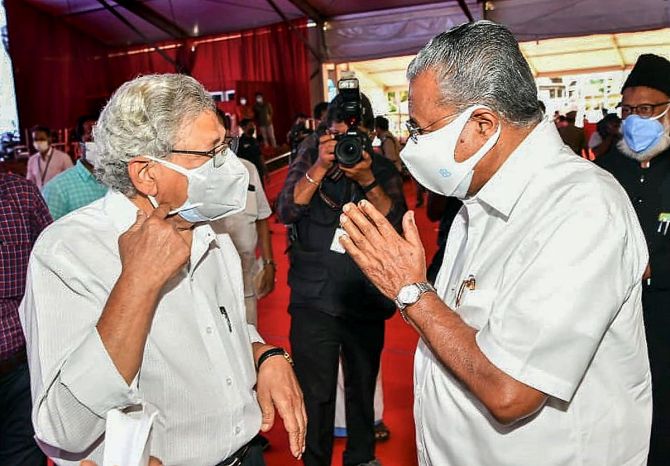 IMAGE: CM Pinarayi Vijayan greets CPI-M general secretary Sitaram Yechury before the oath as the chief minister of Kerala during the swearing-in ceremony at the central stadium in Thiruvananthapuram, on Thursday. Photograph: PTI Photo

It has been a years-long practice for the Communist ministers to pay floral tribute at the martyrs' column before the swearing-in of the Left government.

After taking oath, Vijayan reached his office at the state secretariat to take charge as chief minister.

He also chaired the first meeting of the cabinet later.

Ahead of the swearing-in, senior Congress leader Ramesh Chennithala telephoned Vijayan to congratulate him over the formation of the new ministry.

He informed Vijayan that the UDF representatives will watch the ceremony virtually in view of the spread of coronavirus.

The Kerala high court on Wednesday directed the government to restrict the number of participants at the function in view of the pandemic.

Besides LDF workers, family members of MLAs also watched the function on TV considering the court directive that the ceremony can be viewed from the residence of the respective MLAs.

An online musical fete featuring 54 singers, chronicling Kerala's achievements during the rule of various Left governments in the state since its formation, greeted the dignitaries at the venue.