PIC: 26 injured as bus falls off flyover in Chennai Twenty six persons were injured, six of them seriously, when a state-owned Metropolitan Transport Corporation bus fell off a flyover in the heart of the city on Wednesday afternoon.

The incident occurred at around 1.40 pm when the bus driver on route No 17M from Parrys to Vadapalani tried to take a left turn on the diversion on Anna flyover towards ungambakkam, police said.

However, they refused to confirm eyewitness accounts that the driver was talking on his mobile phone at the time. An MTC official said there were 39 persons on the bus, including the driver and conductor.The incident caused a massive traffic jam, forcing the police to divert traffic.

The injured have been admitted to Royapettah Government Hospital and a nearby private hospital, the police said.

The bus was removed from the spot around three hours later with the help of a crane.

Pic: Onlookers stand next to an overturned passenger bus at the site of an accident in Chennai 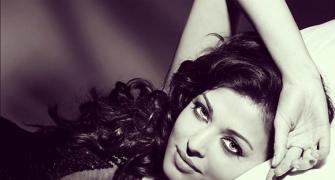 Must See: A stunning picture of Aishwarya Rai