Top 20 images of all the events of the week that was. 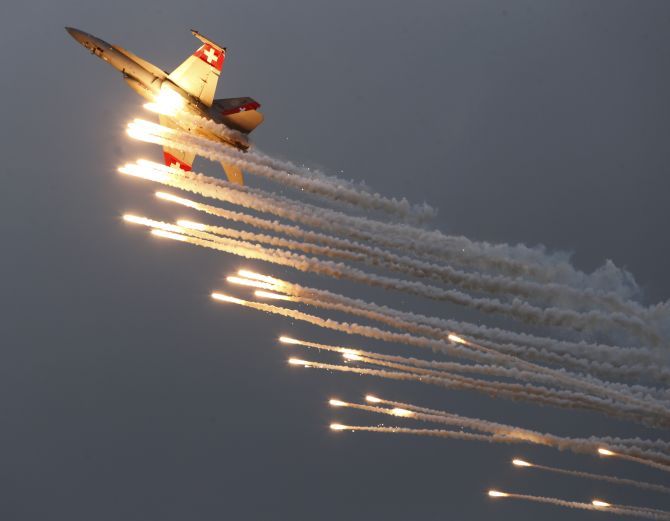 A Swiss Air Force F/A 18 Hornet aircraft releases flare during the Air14 airshow at the airport in Payerne. The Swiss Air Force celebrates their 100th anniversary with the biggest airshow in Europe this year. Photograph: Denis Balibouse/Reuters 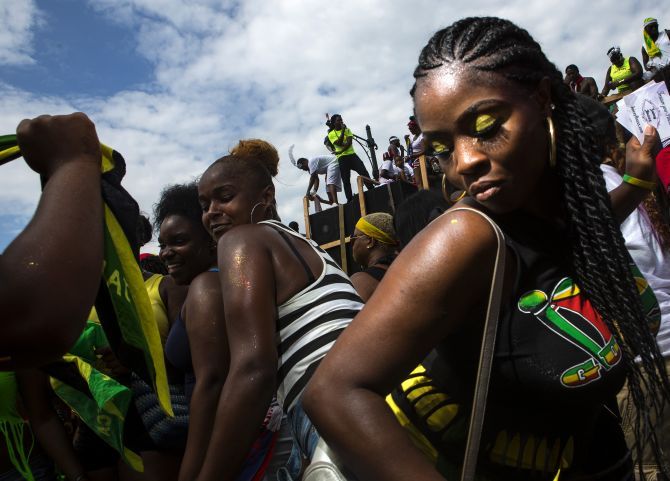 Tourists have dinner as fish swim around them, at the Tianjin Haichang Polar Ocean World in Tianjin. Photograph: Reuters Lava fountains at the site of a fissure eruption near Iceland’s Bardarbunga volcano. A fissure eruption near Iceland’s Bardarbunga volcano was still spouting lava on Monday but no ash, a day after an eruption that briefly caused the country to raise its ash alert level for aviation to its highest level. Iceland's largest volcanic system - 190 km long and up to 25 km wide - has been hit by thousands of earthquakes over the last two weeks, putting scientists have been on high alert. Photograph: Armann Hoskuldsson/Reuters 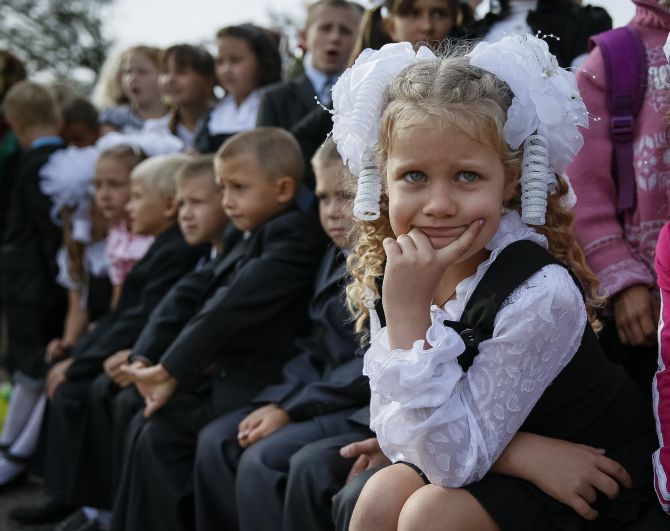 First graders attend a festive ceremony to mark the start of another school year in Slaviansk. September 1 marks the start of a new academic year for students in Ukraine. Photograph: Gleb Garanich/Reuters 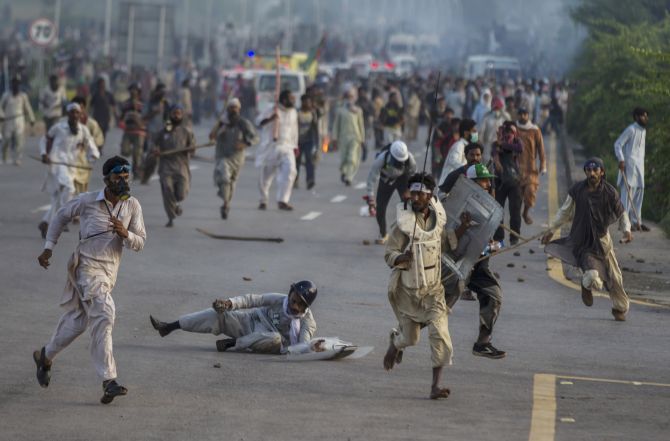 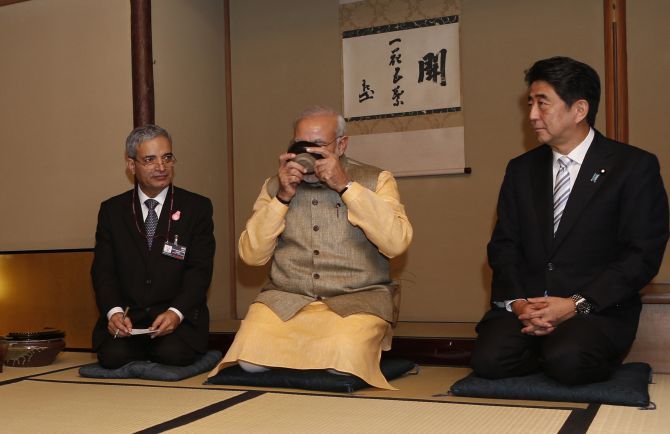 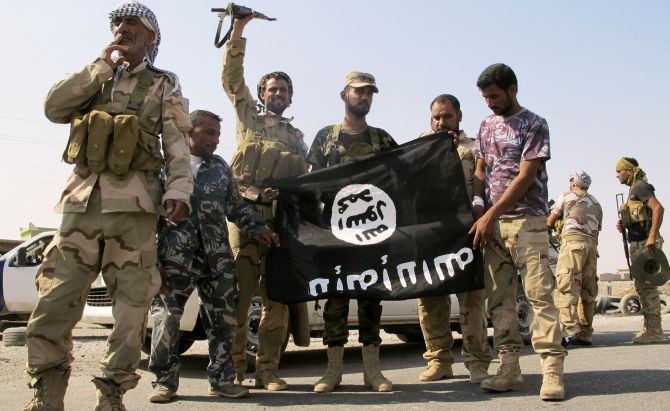 Iraqi security forces and Shi’ite militias pull down a flag belonging to Islamic State militants at Amerli. US President Barack Obama on Monday formally notified Congress that he had authorised targeted air strikes in Iraq to help deliver a humanitarian aid to the besieged Shi’ite town of Amerli, the White House said in a statement. Iraqi security forces backed by Shi’ite militias on Sunday broke the two-month siege of Amerli by Islamic State militants and entered the northern town, after US military carried out air strikes on IS militant positions near the town and airdropped humanitarian supplies to the trapped residents there. Photograph: Reuters 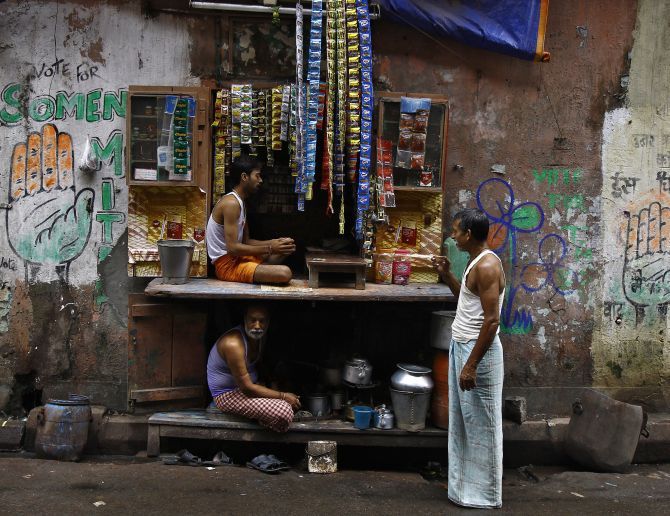 A man drinks tea while standing next to a roadside tea shop in Kolkata. Photograph: Rupak De Chowdhuri/Reuters 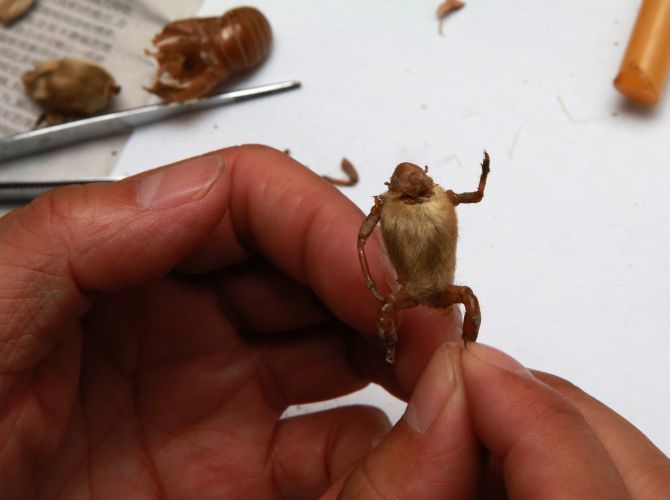 Folk artist Yu Guangjun attaches the legs from a cicada slough onto a Magnolia bud as he makes a ‘Maohou’ in his house in Beijing. ‘Maohou’, which means hairy monkey in Chinese, is a traditional art form in Beijing that dates back to the Qing Dynasty and requires only the use of cicada sloughs and Magnolia buds to form miniature sculptures. Yu has been using Maohou figures in his miniatures to depict scenes from Beijing during the 1960-70s period. Photograph: Kim Kyung-Hoon/Reuters An injured Ukrainian serviceman smokes next to a relative before being put into ambulance for the transportation at a military hospital in Kiev. According to medical personnel at the CentralClinicalHospital, a group of injured Ukrainian servicemen will be travelling from Kiev for further medical treatment at military hospitals in Germany. Photograph: Valentyn Ogirenko/Reuters Activists launch paper boats during celebrations for the 69th anniversary of the end of World War Two in the far eastern city of Vladivostok. The holiday, marking the victory over Japan in World War II, is a Russian national memorial day, established by then President Dmitry Medvedev and approved by the Russian State Duma and the Federation Council on July 23, 2010. Photograph: Yuri Maltsev/Reuters 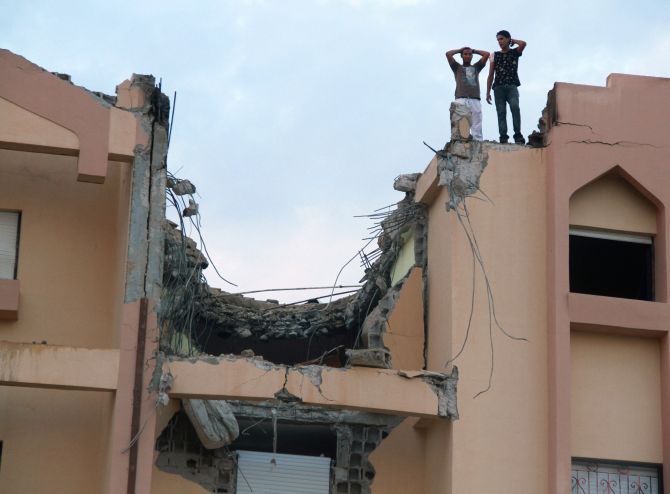 Two men stand on the roof of a damaged building after a Libyan war plane crashed in the eastern city of Tobruk. Three people were killed and nine injured when the plane crashed on Tuesday in a residential part of Tobruk, residents and medics said. The plane went down around one km from the seat of the country’s elected parliament. The crash happened during a military event to honour the pilot of another war plane that had crashed last week, residents said. Photograph: Reuters Armed police officers stand in an inflatable boat, in CardiffBay, ahead of the forthcoming NATO summit, Wales. Photograph: Rebecca Naden/Reuters A 25.3-metre-long giant rabbit designed by Dutch artist Florentijn Hofman is displayed at an old aircraft hangar as part of the Taoyuan Land Art Festival in Taoyuan, northern Taiwan. The rabbit is named "Moon rabbit" for the coming mid-autumn festival or the Moon Festival and will be displayed from September 4 to 14 at the Taoyuan military base. Photograph: Pichi Chuang/Reuters 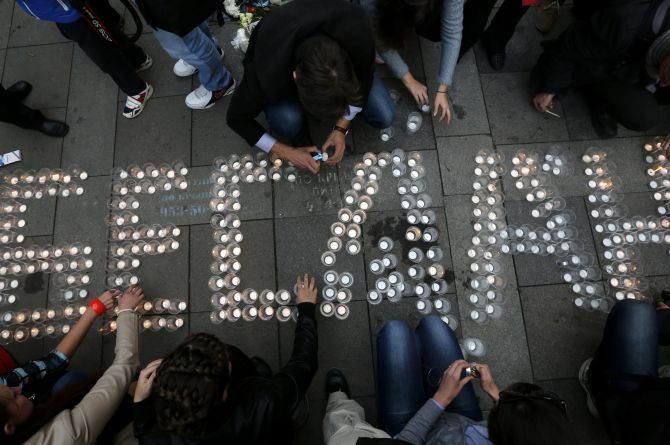 Activists light some of the 334 candles arranged to spell ‘Beslan’, during an event in St Petersburg, commemorating the victims of the 2004 hostage crisis in the southern Russian town of Beslan. People gathered on Wednesday to mark the anniversary of the 2004 Beslan school siege by Islamic militants in North Ossetia that resulted in 334 civilian deaths, including 186 children. Photograph: Alexander Demianchuk/Reuters 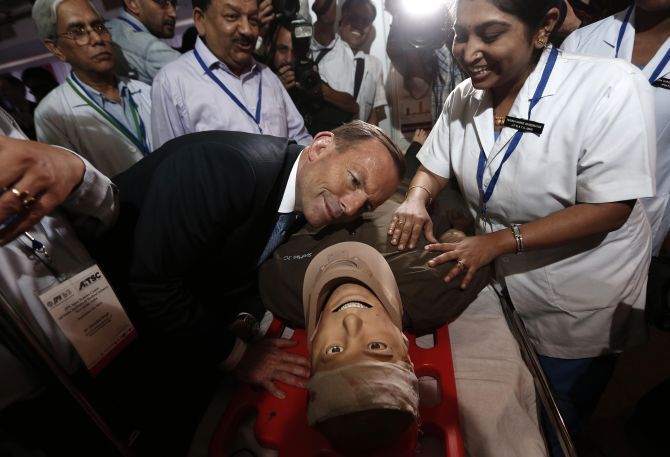 Australia’s Prime Minister Tony Abbott takes part in a presentation with a patient simulator during his visit to the trauma centre of the All India Institutes of Medical Sciences in New Delhi. Abbott said he would seal a civil nuclear deal to sell uranium to India on Friday, offering to ramp up supplies of energy to help the emerging Asian giant overcome chronic shortages. Photograph: Adnan Abidi/Reuters A Palestinian man looks out of his heavily damaged house at neighbouring houses which witnesses said were destroyed during the Israeli offensive, in the east of GazaCity. An open-ended ceasefire between Israel and Hamas-led Gaza militants, mediated by Egypt, took effect on August 26 after a seven-week conflict. It called for an indefinite halt to hostilities, the immediate opening of Gaza’s blockaded crossings with Israel and Egypt, and a widening of the territory’s fishing zone in the Mediterranean. Photograph: Suhaib Salem/Reuters 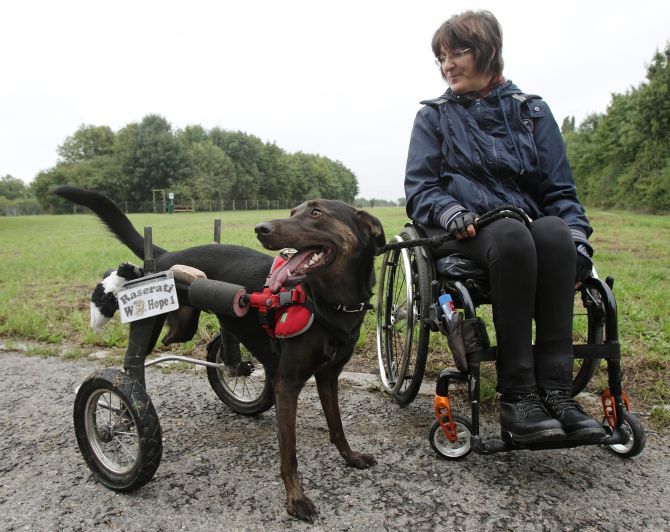 Regine Grosinger and her three-years-old dog Hope pose in Vienna. Hope was found with cut-off back legs in the countryside and brought to an animal asylum when it was four-month-old. Grosinger took the dog home two months later and had a wheelchair manufactured for it. Photograph: Heinz-Peter Bader/Reuters 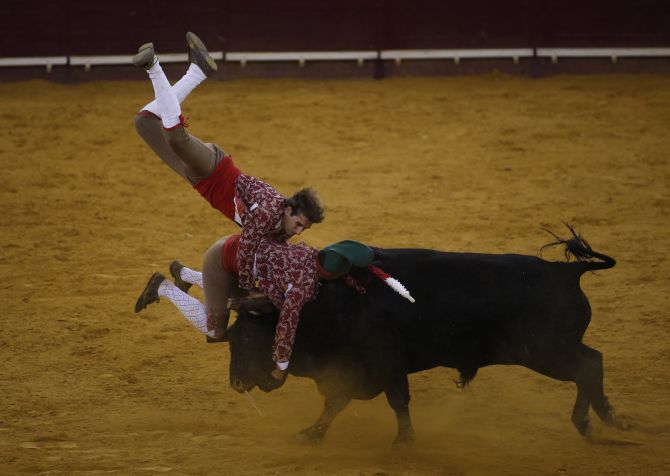 Members of Vila Franca Xira forcados group perform during a bullfight at Campo Pequeno bullring in Lisbon. Forcados are traditional Portuguese bullfighters who catch bulls with their bare hands during the festival. Photograph: Rafael Marchante/Reuters

Missed the previous week's happenings? Catch all of them HERE