The coronavirus outbreak has killed 305 people and infected 14,562 others as the Philippines on Sunday reported the first death outside China from the epidemic that has spread to 25 countries, including India, the United States, the United Kingdom and Russia. 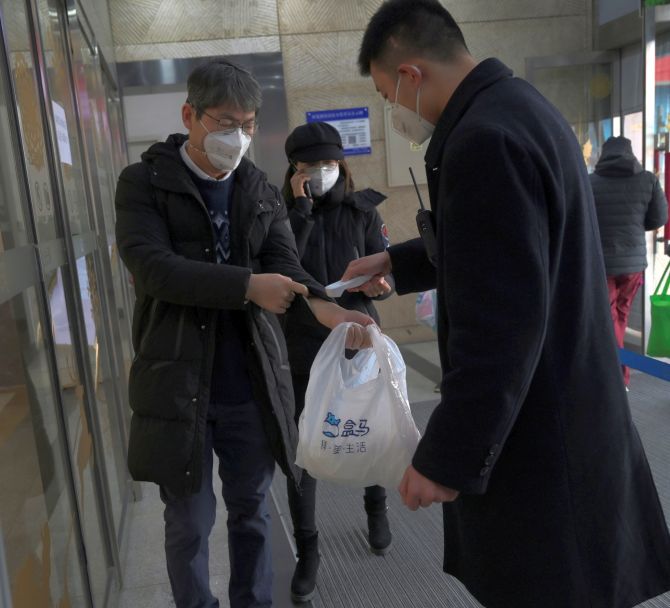 The Philippines on Sunday reported the first coronavirus death outside mainland China, hours after China's National Health Commission said a total of 304 people had died from the disease till Saturday.

In China, all the deaths were reported in Hubei Province -- the epicentre of the virus outbreak, according to the commission.

The virus, which has infected more than 14,562 people, continues to spread beyond China.

The victim in the Philippines was a 44-year-old Chinese man, who died on February 1.

He was the companion of a 38-year-old Chinese woman, who arrived in the Philippines from Wuhan on January 21 after travelling through Hong Kong, the South China Morning Post reported.

"This is the first reported death outside China," said the World Health Organisation representative to the Philippines, Rabindra Abeyasinghe.

On Sunday, India airlifted a second batch of 323 stranded Indians and seven Maldivian citizens from coronavirus-hit Wuhan city, taking the total number of people evacuated to 654.

Air India's jumbo B747 made two flights to Wuhan city - the ground zero of the coronavirus epidemic. In the first flight on early Saturday, 324 Indians were evacuated and on Sunday another 323 Indians and seven Maldivian citizens were flown back.

The Indian Army has set up a quarantine facility in Manesar near Delhi to keep those evacuated from the virus-hit province. They would be monitored for any signs of infection for two weeks by a qualified team of doctors and staff members.

The virus that emerged in late December in Hubei province capital Wuhan has now spread to 25 countries, including India where a second case of coronavirus was reported from Kerala on Sunday.

The United Arab Emirates also confirmed a new case of the coronavirus, taking the total number of people affected by the disease in the Gulf country to five. The Ministry of Health and Prevention (MOHAP) on Saturday said the new case involves a Chinese travelling from Wuhan.

Meanwhile, the National Health Commission in China said that 4,562 new suspected cases were reported on Saturday.

On Saturday, 315 patients became seriously ill and 85 people were discharged from hospital after recovery, the Commission said.

The commission added that 2,110 patients remained in severe condition, and 19,544 people were suspected of being infected with the virus.

A total of 328 people have been discharged from hospital after recovery.

The commission said 1,63,844 close contacts had been traced, adding that among them, 8,044 were discharged from medical observation on Saturday, with 1,37,594 others still under medical observation, state-run Xinhua news agency reported.

While India, the US, Sri Lanka, Bangladesh and many countries evacuated their nationals from Wuhan, the Pakistani government - despite strong criticism from the opposition - has declined pleas by several hundred Pakistani students in Wuhan to airlift them.

Pakistan's Ambassador to China Naghmana Hashmi on Sunday said that Pakistani students should not be evacuated from Wuhan as medical facilities back home do not meet the standards required to treat a patient diagnosed with coronavirus, Geo News reported.

Hashmi's remarks came a day after Special Assistant to Prime Minister on Health Dr Zafar Mirza said that the government will not bring its citizens despite multiple requests from the students and their families for immediate evacuation.