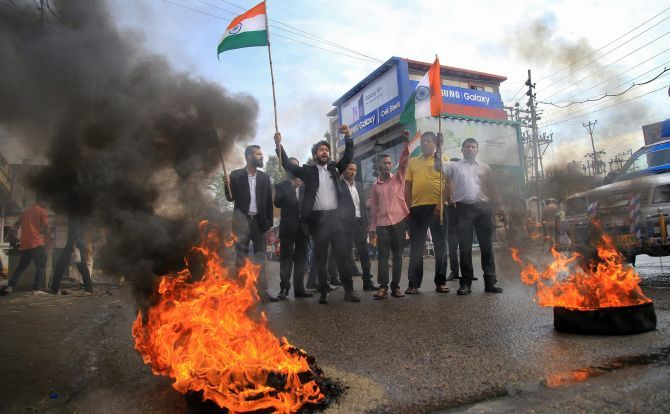 The Bar Association of Jammu (BAJ) on Thursday alleged that their agitation for a Central Bureau of Investigation probe into the Kathua rape and murder case to ensure justice for the eight-year-old-victim was being portrayed as communal by those with a 'Kashmir-centric mindset'.

Batting strongly for justice for the victim, the BAJ claimed that the probe by the crime branch of Jammu and Kashmir Police was done on questionable line amid threats and coercion by a team of officers from Kashmir Valley including one who served jail term for alleged rape and murder of a minor.

On Wednesday, Jammu city wore a deserted look with all major shopping areas, trading markets and schools closed following a bandh call given by Jammu High Court Bar Association (JHCBA) to protest against the growing illegal presence of Rohingyas and Bangladeshi nationals, while also demanding a CBI probe into the Kathua rape-cum-murder.

Jammu has been tense since the brutal rape and murder of the eight-year-old girl belonging to the nomadic Muslim Bakerwal community. The police has arrested eight people in the case, but the Bar Association has opposed the action alleging 'targeting of minority Dogras'.

Some of the arrested accused belonged to Hindu Ekta Manch, a right wing group.

"Kashmir-centric mindset tried to give our agitation for CBI probe a communal colour. They were trying to divide Jammu on communal lines. It is their conspiracy. It was portrayed as if we are against justice for the girl. We demand CBI probe for justice to the minor, and those involved should be punished," BAJ President B S Salathia said at a press conference in Jammu.

He said the BAJ, from the very beginning, called for fair and impartial probe to punish the guilty, 'and that is why we demanded a CBI probe'.

"The manner in which investigation was done is questionable, but the matter is in court now. The call for yesterday's bandh was given to basically to address the issues including deportation of Rohingyas and the directive of the tribal affairs department on the direction of the chief minister (regarding encroachments by Gujjars in Jammu)," Salathia said.

He said the BAJ had told the media repeatedly that Wednesday's bandh was not on the Kathua rape-and-murder issue as the case is in court now.

The Bar Association of Jammu still demands a CBI probe as the investigation by the crime branch will 'only benefit the accused in the case and deny justice to the girl', Salathia said, adding the government cannot order a probe by the central agency as it is up to the court now.

He claimed that the special investigation team that was probing the case constituted officers from Kashmir wing of the crime branch.

Salathia said the manner in which the special investigation team (SIT) was set up by the government, raised 'deep suspicion and fear (in the minds of minority Dogras of the area) that the probe would not be impartial'.

"Boys were picked up. They were harassed and tortured by the crime branch to give statements before a judge under Section 166 of CrPC," he said.

Salathia alleged that a member of the probing team was involved in case of rape and murder of a minor girl in Doda, and was in jail for over one-and-a-half years.

The president of the Bar Association of Jammu said if the government can give hand over the case of rape and murder of two women in Shopian to the CBI on public demand, then in this case too it should have done the same.

On chief minister Mehbooba Mufti's statement that protests cannot stop the probe, Salathia said, now the court will decide and not the chief minister.

He said the bar association will hold a meeting to decide on the next course of action.