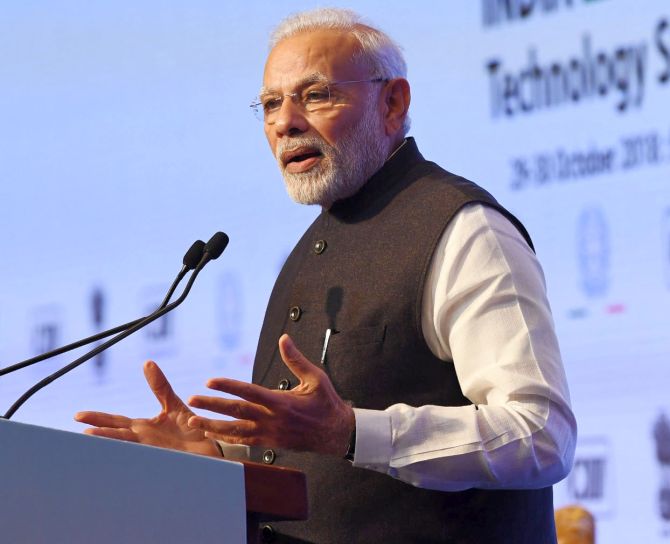 Prime Minister Narendra Modi on Friday said there was lack of work culture in the past and India lagged behind in development despite 'big surnames' running the country.

He said since the Bharatiya Janata Party came to power in 2014, change can be witnessed.

Addressing the 'Jagran Forum' organised by the Dainik Jagran media group, he said, "People with big surnames came to power and went but no solution could be found to the problems."

He was making an oblique reference to the Nehru-Gandhi family.

"In the last four years, you have yourself witnessed this change. Figures speak for itself. But this did not happen in the past. If poverty was alleviated, how would the slogan of 'garibi hatao' be given... It would hit vote bank politics," Modi said.

He was referring to the slogan 'garibi hatao' (remove poverty) slogan given by the then Prime Minister Indira Gandhi in the 1971 Lok Sabha elections.

Modi said when the poor and deprived will get basic amenities such as toilets, gas connection, power supply and bank accounts, then 'the poor will be able to defeat poverty themselves'.

He said today, the government has the courage to aim high and take big decisions because it is a strong government which has the full mandate of the electorate. "For a new India, the focus of the government is on ability, resources, culture and security."

He suggested that while there was no shortage of funds in the past, what was actually missing was the passion to get things done. He also said, solutions were present, but what was needed was sensitivity.

Modi also claimed that work culture was missing in the past, though the bureaucrats, the system and the people are the same today, things are moving at a faster pace now.

"Our youth are talented and hardworking too. We have abundance of natural resources. Despite having all these, why could our country not prosper," he asked.

Modi cited figures such as number of people paying income tax and number of entities registered with goods and services tax to drive home his point that more has been achieved under his government than during previous regimes.

"Can you imagine that before we came to power, Mizoram, Meghalaya and Tripura were not on the rail map of India... Why is it that 67 years after independence, only 38 per cent rural households had toilets and how the number went up to 95 per cent in the last four years," he said.

Modi also expressed the hope that that India's efforts to ensure that economic offenders who flee the country do not get safe haven abroad will show results.

"India has put forth some suggestions before the international community to ensure that people "who commit economic offences, those who are fugitives... should not get any sanctuary anywhere in the world", Modi said.

"I am confident that our campaign will show results," he said.

The prime minister said he put across New Delhi's stand before the strong economies at the recent G-20 meet in Argentina.

The government is working to bring back people like Vijay Mallya, Mehul Choksi and Nirav Modi for their alleged involvement in scams.

Modi presented the agenda in the second session of the G20 Summit on international trade, international financial and tax systems.

The Congress hit back saying the PM could not mislead the people by 'lying' as he had been 'exposed'.

Congress' chief spokesperson Randeep Surjewala also listed a string of achievements over the last seven decades to highlight the progress made under Congress governments.

Surjewala dismissed the prime minister's remarks as 'baseless' and listed several achievements of the country.

"When he had not been born, India had won a war against Pakistan," the Congress leader said.

He cited steps such as building of the Bhakra Nangal Dam, abolition of the Zamidari system, abolition of untouchability, setting up of the Navratnas, the IT boom, liberalisation, to state that there had been a tremendous transformation in the country.

"When he was attending an RSS shakha, the country had changed the geography of the Asian sub-continent. When he was running an arrogant rule in Gujarat, the UPA government had lifted 14 crore people above the poverty line," he said.

Surjewala said the Congress had not done all this, but it was the result of the hard work of 132 crore Indians in over 70 years.

"You dishonour the journey of 70 years that India has undertaken. You cannot mislead the people by lying as you have been exposed," Surjewala claimed.

He also claimed that when the results of the assembly polls in Chhattisgarh, Madhya Pradesh, Mizoram, Rajasthan and Telangana come out on December 11, the Congress was confident that it would mark a 'new dawn for the country' and the beginning of a 'new kind of politics'.

He claimed that the Congress' campaign throughout the state polls remained positive, while the BJP's campaign was one of 'abuses and negativity'.

Surjewala claimed they had been indulging in divisive politics of caste and religion, but the extreme was reached when in Madhya Pradesh and Rajasthan polls they did not even spare the Gods.

The Congress spokesperson alleged that the prime minister and his leaders used abusive language. "I will have to say that the PM's behaviour was shameful and condemnable," he said.

The political discourse of the country was lowered by the BJP, he alleged. 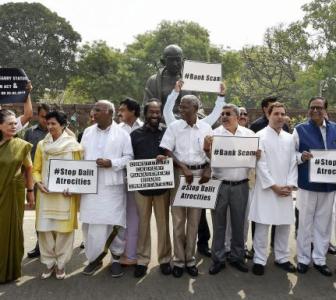