The eagerness of locals and tourists in Ayodhya seems to have peaked with Chief Justice of India Ranjan Gogoi reiterating that Wednesday will be the last day of hearings in the Ram Mandir-Babri Masjid land dispute case. 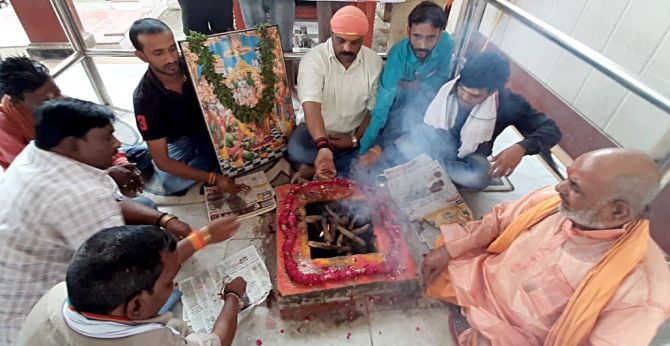 IMAGE: A priest performs a havan to pray for the Supreme Court's decision in favour of Ram Mandir on the last day of the case hearing in Varanasi. Photograph: ANI Photo

Kishore Raut, another tourist, who visited the makeshift Ram temple in the morning expressed the hope that the judgment from the Supreme Court will be in the favour of the Ram temple.

"With Lord Ram's blessings, the judgment will be in favour of the Ram temple. There should definitely be a temple at the place where Lord Ram was born. The people are eager for the verdict as it can come in under a month," Raut said.

Earlier on Wednesday, Chief Justice of India Ranjan Gogoi said that the daily hearings on the Ram Mandir-Babri Masjid land dispute will end by 5 pm on Wednesday.

"By 5 pm this matter is going to be over. Enough is enough," Justice Gogoi said while dismissing the intervention application filed by the Hindu Mahasabha in the apex court seeking more time for arguments.