People voted for Jayalalithaa, not members of her household: Stalin 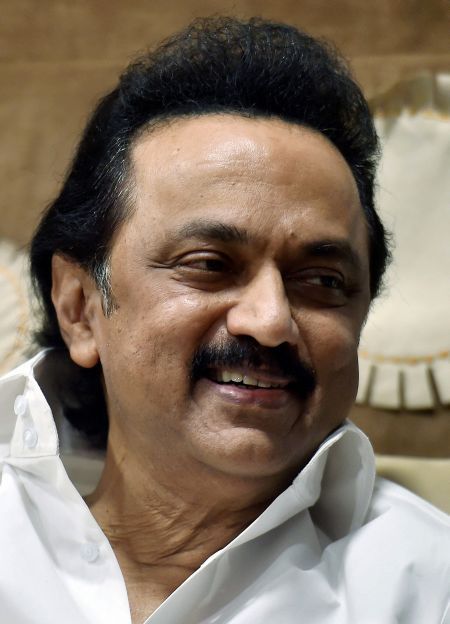 People of Tamil Nadu did not vote for anyone from Jayalalithaa's "household" to be chief minister, says Dravida Munnetra Kazhagam Working President M K Stalin, who appears to be keeping his options open on the possibility of another government in the tenure of the current assembly.

He also asserts that there are no "obstacles" to his leadership in the party and dismisses as "pointless" questions whether projecting him as the chief ministerial face would have won the DMK power in the last year's assembly polls.

The 63-year-old leader, who was made the Working President of the DMK last month, is worried about divisions in the ruling All India Anna Dravida Munnetra Kazhagam after the death of Jayalalithaa and keen that it should not affect the functioning of the administration.

"One thing is certain that the government -- in its present form -- is clearly one that doesn't have the explicit legitimacy of having been elected by the people.

"The people voted for a government to be headed by Ms Jayalalithaa in May, 2016 and not for one to be run by Mr. O Panneerselvam or any other person from Ms Jayalalithaa's household," Stalin told PTI in an interview, the first since he took over as Working President.

His comments came on a day the chorus grew in the AIADMK for its General Secretary V K Sasikala to take over as chief minister of the state.

So, the Leader of the Opposition in the state said, the present government, which clearly does not enjoy the support of the majority people, which has a divided cabinet and the AIADMK MLAs speaking in different voices, is bound to fail.

"As a responsible party, the DMK is watching the situation closely. Any decision that we take will be within the framework of democracy, reflecting the popular will and aspirations of the people," he said.

He was asked whether he foresaw the possibility of the DMK forming a government within the tenure of the 15th assembly given that the gap in numbers between the ruling and the opposition parties is not very huge.

Asked about reports of power struggle within the AIADMK in the wake of Jayalalithaa's death, Stalin said that the DMK does not want to intervene or interfere in the internal affairs of the AIADMK but there were reports on a daily basis that such a division existed.

"As the Leader of the Opposition in the state, however, my primary worry is that such internal problems within the ruling AIADMK should affect neither the functioning of the Legislative Assembly nor the administration of the state. As the main opposition party in the state, the DMK has the responsibility to ensure that," he said.

When queried about murmurs of criticism about family politics in the DMK and when he foresaw himself taking full charge of the party, Stalin said his detention under MISA during the emergency in 1975-77 is still green in his memory.

He said that he was happy that he had an opportunity to fight for democracy as a cadre of the DMK during his youth.

"Dr Kalaignar (Karunanidhi) is the President of the party and he has been guiding me in all the spheres of my activity. I know very well that a hard and sincere worker in the DMK will never face obstacles and even if there are a few obstacles, they will be converted into stepping stones," he said.

Stalin, son of Karunanidhi, had led a spirited campaign ahead of the assembly elections last year that in which the party won 89 seats on its own and 98 together with allies in a House of 234 losing by a narrow margin in the race for power.

Asked if he agreed with the analysis that probably projecting him as the chief minister would have ensured DMK's victory, he said the number of seats won by the DMK individually and together with allies were both unprecedented records.

"Even with the draw of Ms Jayalalithaa at the helm of the AIADMK, the vote margin between the party in power and the DMK was just 1.1 per cent. Our future is so bright. This kind of post-hoc speculation about our previous campaign that your question raises is completely pointless. I strongly believe that digging into the past is distracting from the future," he said.

To a question on the perception that the DMK has not been strident in attacking the Centre on issues concerning central projects in the state, Stalin said as a political party, the DMK always preferred to maintain good relations with the party in power at the Centre but only as long as the interests of the State and the secular character of the nation are protected.

"But we are not the ruling party in Tamil Nadu. It is for the ruling AIADMK, which also happens to have 49 MPs, to make the central government act fairly towards the state."

He said that he was disappointed at the AIADMK government's lack of enthusiasm to fight for the rights of the state with the government at the Centre.

As for the Sethusamudram project, Stalin charged that it has been delayed not only due to the efforts of the BJP but also due to the AIADMK government's attitude which is unmindful of the development of the state.

"The DMK is strongly for the Sethusamudram project, which will boost the economy, spur development and create employment - in not only the southern districts but the whole state and wherever the situation demands we haver been raising our voice for the implementation of the project," he said.

When queried about the Dravidian parties aligning with the one or the other national parties in recent decades and whether the Marina Uprising had any message for the DMK to go to its roots, Stalin said he believed in constructive centre-state relations.

"In a federal set-up, the state government has to depend upon the help of the Central government on so many important issues such as inter-state disputes, major infrastructure development projects, and allocation of central funds," he said.

At the same time, Stalin said, " The DMK is not for giving up the state's rights. It was their party which had first appointed the Rajamannar Commission over Centre-State relations and it was the DMK which had adopted the motto "autonomy for states and federalism at the Centre".

The party remains committed to this principle always, he said, adding whenever the state's rights were harmed during the years the party was in the ruling coalition at the Centre, it had achieved a number of projects for the development of the state.

"Whenever state's rights were affected during those years, we never hesitated to express our views or raise our voice with all seriousness and strength. We never compromised our individual identity while supporting any government at the Centre as this identity is our heart and soul.

"The recent Marina uprising reflects the disappointment among the students and youth about the non-performing AIADMK government in the state and the Centre's complete apathy towards important issues concerning the state.

"As many have observed, the Jallikattu issue is the straw that broke the Camel's back, the issue that ignited the pent-up discontent on many issues," he said.

Stalin cited the "betrayal" of the Centre over the formation of Cauvery Management Board despite the Supreme Court's direction has been mentioned by many students who were interviewed during the protests.

"History shows that this kind of large-scale action has been crucial to the growth and evolution of the Dravidian Movement over the past century. Think of the massive student-led anti-Hindi agitation in the mid-1960s, which was the precursor to the first DMK government in 1967.

"As the current standard-bearer of the Dravidian Movement, the DMK is confident that the students' uprising will once again reinforce our objectives, rather than undermine them," he said.

The DMK, Stalin said, was the first party to take up the cause of Jallikattu very early.

"I myself led a mammoth protest at Alanganallur on January 3 itself. But it was a peaceful protest of students, youngsters and common citizens in places like the Marina Beach in Chennai and Tamukkam grounds in Madurai, which ultimately forced the AIADMK government's hand to table the legislation enabling Jalllikattu."

Equally, he said, the DMK has been relentlessly fighting for the cause of the people, including recently, the appointment of a Commission of Inquiry into the alleged discriminate attack and atrocities unleashed by the police onthe students after the peaceful Jallikattu protests.

Stalin said the recent announcement by the chief minister about the formation of a Commission of Inquiry with almost all the terms demanded by the DMK was a victory for the party.

"The party has its principles and values and will continue to fight to ensure that the interest of the each and every section of society in the state is protected fully against the maladministration of the AIADMK," he said.

Asked about his taking over at the helm of his party at a time when there is vacuum in the the state with the fading away of Jayalalithaa and Karunanidhi from politics, Stalin said he did not agree with the theory that there is a political vacuum in the state.

"It is a theory being planted by some people with a view to discrediting the DMK - the Dravidian party which has worked for the betterment of the state in the field of social justice, women's emancipation, industrial growth and economic development for over 50 years.

"Dr Kalaignar is still very much the unassailable President of the party and he continues to inspire and guide the party...

"I am not new to the party. I have worked as Unit Organiser, Branch Secretary, Youth Wing Secretary, Dy General Secretary and Treasurer, along the seniors and veterans. I have now assumed the responsibility as the Working President of the party. I am humbled by the affection and faith and great amount of confidence that the party cadres have vested in me.

"I am in turn confident that I can discharge the responsibility given to me by the General Council of DMK under the able leadership of Dr Kalaignar to the best satisfaction of the entire party," he said.

On the challenge facing him and his party, Stalin said the challenge before it now was to recover the lost glory of the state, which has been "squandered by the inefficient, incapable and corrupt AIADMK government.

"Our state has seen massive decline with regard to industrialisation, general economy, growth in job opportunities and overall development in the last six years' of AIADMK misrule.

"Reconstructing the state will be a Herculean task and a big challenge -- but one that we are well prepared for. Even in opposition, the DMK will continue to highlight the misdeeds, poor governance and maladministration of AIADMK rule in the state." 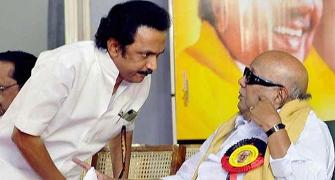 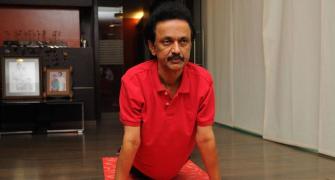 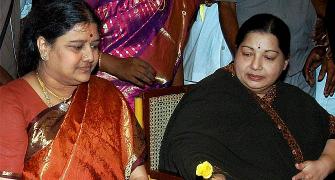 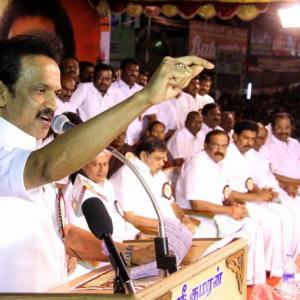 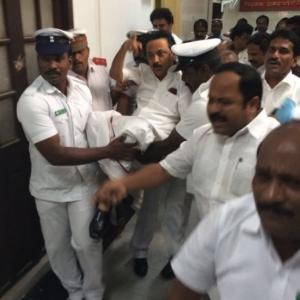