Pentagon implementing orderly withdrawal of US troops from Syria 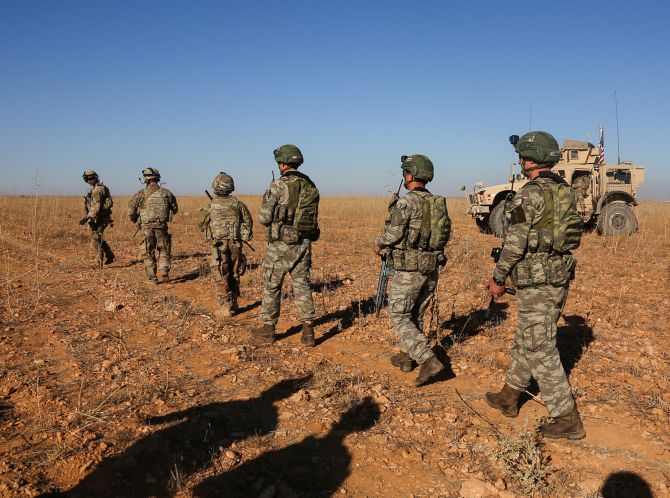 IMAGE: US and Turkish soldiers during a combined joint patrol outside Manbij, Syria. Photograph: Courtesy Arnada Jones/US Army/Handout via Reuters

The United States is implementing an orderly withdrawal of its troops from Syria based on operational conditions on the ground, including talks with its allies, and with no arbitrary timeline, the Pentagon has said.

It asserted that it is implementing the withdrawal of forces from northeast Syria within a framework coordinated across the US government.

"Operation Inherent Resolve is implementing the orderly withdrawal of forces from northeast Syria within a framework coordinated across the US Government. The withdrawal is based on operational conditions on the ground, including conversation with our allies and partners, and is not be subject to an arbitrary timeline," Pentagon spokesman Commander Sean Robertson said on Friday.

The US will continue to provide support to the coalition's operation in Syria while withdrawing troops in a deliberate and coordinated manner in order to ensure the safety and protection of US forces. The United States currently has some 2,000 troops in Syria.

Last month, Trump had ordered withdrawal of troops from Syria. The then Defense Secretary James Mattis resigned in protest.

In recent weeks, Trump has said that the withdrawal would be slow and gradual.

The Pentagon has taken a number of logistical measures to support an ordered withdrawal.

"For purposes of operational security, we will not discuss specific troop movements or timelines. However, we will confirm that there has been no redeployment of military personnel from Syria to date," Robertson said.

Noting that the mission of 'Operation Inherent Resolve' has not changed, the Pentagon spokesman said that the US and its regional partners continue to pursue ISIS in the last remaining space the terror outfit currently holds.

Throughout the fight, forces continued to rescue civilians as they fled while ISIS continued to hide in residential areas and public facilities to protect themselves, he said.

"We will continue to work with partners and allies to ensure the enduring defeat of ISIS by sustaining military gains and promoting regional security and stability. We thank every member of the Coalition for their contributions to the fight against ISIS," Robertson said.

On Friday, Indian-American Congressman Ro Khanna said that the US needed to make sure that its withdrawal from Syria is based on human rights.

"That means making sure that we get Turkey's commitment not to annex the Kurds, commit humanitarian assistance to rebuilding Syria, and accept Syrian refugees," he said.

Senator Jeanne Shaheen said that the President's hasty withdrawal of US troops from Syria jeopardises justice for Americans murdered by Islamic State.

"I are urging the admin not to lose sight of the goal of holding these terrorists accountable," he said.

In a joint op-ed in The Washington Post, Senators Jeanne Shaheen and Diane Foley urged the president to continue prioritising justice for the Americans lost in Syria and not lose sight of the momentous opportunity that lies ahead of him.

The president's unexpected decision to withdraw US troops from Syria has betrayed the trust the Syrian Democratic Forces (SDF) put in the United States, they said.

"Without US support, the SDF will be in a battle for survival, degrading the group's ability to oversee the detention of these Islamic State fighters or complete the mission to eradicate the terrorist group in the region," the Senators said.

"This not only puts the lives of Syrian Kurds in jeopardy but also risks a resurgence of Islamic State violence around the globe. Among the many ramifications, the prospect of justice for James and other Americans murdered by the group could disappear," they wrote. 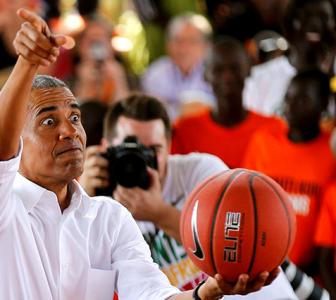 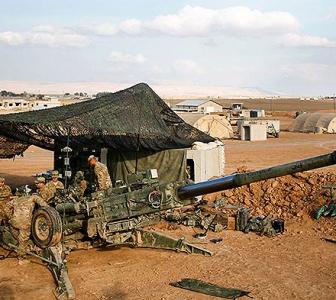 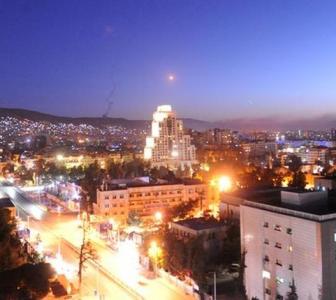