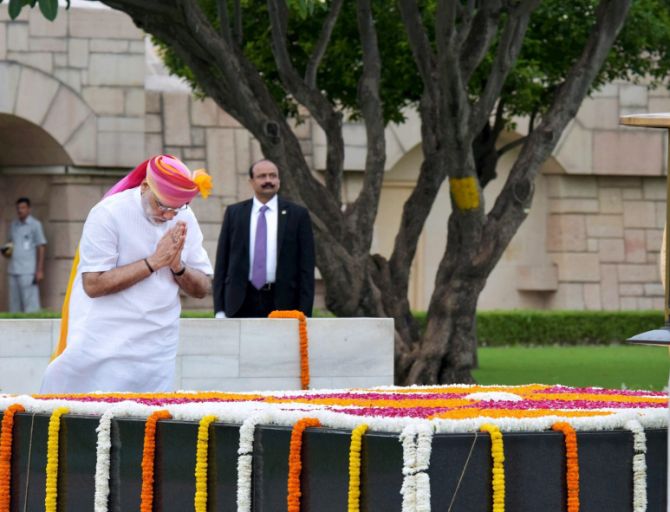 The monthly pension of freedom fighters, who were incarcerated in Cellular Jail in Andaman Islands, has been hiked by Rs 5,000 to Rs 30,000 following an announcement by Prime Minister Narendra Modi during his Independence Day speech.

Pension for freedom fighters in the category of ex-Andaman political prisoners and their spouses has been enhanced from Rs 24,775 to Rs 30,000 per month, a home ministry official said.

Pension of freedom fighters, who suffered outside British India, has been raised from Rs 23,085 to Rs 28,000 per month.

Pension of other freedom fighters, including those who were members of Indian National Army, has been raised from Rs 21,395 to Rs 26,000 per month.

Addressing the nation on the 70th Independence Day from the Red Fort, the prime minister had announced a 20 per cent hike in the pension for freedom fighters.

Central freedom fighter pensioners and eligible dependents under ‘Swatantrata Sainik Samman Pension’ will get enhanced pension with effect from August 15, 2016, an official said.

Emoluments given to dependents and eligible daughters have been raised to 50 per cent of the sum that would have been admissible to freedom fighters.

There are around 37,000 freedom fighters in the country.

A home ministry statement said the existing dearness relief system based on All India Consumer Price Index for Industrial workers, which was hitherto applied to freedom fighter pensioners on annual basis, is being discontinued and replaced by the dearness allowance system applicable to central government employees twice a year.

All freedom fighters and spouses and dependent parents, eligible daughter pensioners of deceased freedom fighters drawing pension under the Swatantrata Sainik Samman Pension Scheme, 1980 would be benefited by the decision.

So far, 1,71,605 freedom fighters and their eligible dependents have been sanctioned pension under the scheme.

In 1969, the central government had introduced the ‘Ex-Andaman Political Prisoners Pension Scheme’ to honour the freedom fighters who had been incarcerated in the Cellular Jail at Port Blair.

In 1972, to commemorate the 25th anniversary of country’s Independence, a regular scheme for grant of freedom fighters’ pension was introduced.

Thereafter, with effect from August 1, 1980, a liberalised scheme, namely the ‘Swatantrata Sainik Samman Pension Scheme’ was implemented. Besides the freedom fighters, spouses (widows/widowers), unmarried and unemployed daughters (upto maximum three at any point of time) and parents of deceased freedom fighters are eligible for pension under the scheme.