In a major setback to the People's Democratic Party, three of its senior leaders, including a former MP, on Monday announced their resignation from the party, days after its president Mehbooba Mufti stoked acontroversy by her remarks on the national flag. In a joint letter to Mehbooba, former MP T S Bajwa, Ved Mahajan and Hussain Ali Waffa said, "We feel uncomfortable and suffocated, forcing us to take a difficult decision of leaving the party."

Waffa, is a former PDP state secretary, and Mahajan a former MLC.

In her first press conference after over 14 months of detention, former chief minister and PDP supremo Mehbooba on Friday had said she was not interested in contesting elections or holding the tricolour till the constitutional changes enforced on August 5 last year were rolled back.

The PDP leader had also said that she would hold the tricolour only when the separate flag of the erstwhile state of Jammu and Kashmir was restored.

The Centre on August 5 last year had abrogated the erstwhile state's special status and bifurcated it into union territories of Jammu and Kashmir, and Ladakh.

The trio in their two-page letter said, "We, your party colleagues in Jammu region, most of whom remained associated with the party through every thick and thin, since its formation, are feeling quite uncomfortable over some of your actions and undesirable utterances, especially which hurt patriotic sentiments."

PDP founder Mufti Mohammad Sayeed had broader objectives behind the formation of the party which included creation of a viable political alternative in Jammu and Kashmir to represent the regional aspirations of the people, the letter read.

Forming the PDP was also meant to channelise dissent, especially among the youth, and prevent them from falling in the trap of anti-India elements in the absence of any credible platform to represent their genuine feelings, besides secularism and broader interests of the people of Jammu and Kashmir and interest of the nation, it said.

These were the underlying principles behind the formation of the PDP, the letter read.

"The party received an overwhelming response to these initiatives and it could emerge as a meaningful political force to attain power in a very short span and formed the government in coalition with Congress which performed very well and delivered in accordance with the set goals, achieving a lot in the direction of restoration of peace, harmony and ensuring equitable development of different regions," it said.

Referring to the last PDP-BJP government, which collapsed after the saffron party pulled out in 2018, the leaders said the party under the leadership of Mufti Mohammad Sayeed took a difficult decision of joining hands with the ideologically opposite BJP but the experiment did not work on the expected lines.

"The sudden death of Sayeed derailed the whole process and the later developments are a history and another phase of the struggle, and test of the leadership started post the August 5 last year development when the Centre abrogated the special status and bifurcated the erstwhile state into two union territories," they said in their letter.

"Despite several undesirable developments and steps, we stood like a rock with the party and the leadership in spite of serious reservations on the handling and response of the party to the challenges of the situation in front of the party," the leaders said.

Instead of overcoming the challenges from within and outside by a process of broader consultations and trust, "some elements within the party started pulling the party and leadership in a particular direction, thus deviating from the basic principles, agenda and philosophy, making it further difficult to face the saner voices in society", the letter read.

"Some of the actions and utterances are unpardonable and unforgettable by the people, for the party to emerge out and move in the direction of its fundamental approach and identity, besides regaining its image as a political alternative to the people," it said.

BJP leaders have hit out at Mehbooba for her remarks, saying seditious statements will not be tolerated.

Over the past two days, the PDP headquarters in Jammu saw repeated attempts by various groups and individuals to hoist the national flag, prompting authorities to deploy police personnel in strength to avoid any untoward incident. 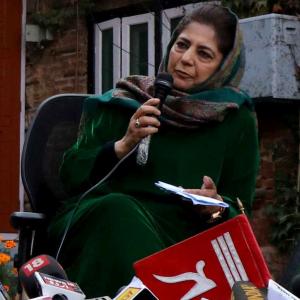