Source: PTI
July 25, 2012 16:32 IST
A solution to the Congress-Nationalist Congress Party standoff appears to be in sight with Prime Minister Manmohan Singh reaching out to NCP chief Sharad Pawar on Wednesday amid indications that a UPA coordination committee could be set up.

Signs of a thaw emerged with NCP leader Praful Patel disputing reports that his party had served an ultimatum to the Congress. He also called up Maharashtra Chief Minister Prithviraj Chavan for the first time since the crisis began last Thursday.

Sources said the PM is expected to meet Pawar and Patel shortly to address the issues raised by the NCP, including the need for a coordination committee for the UPA.  UPA Chairperson Sonia Gandhi is also expected to part of the meeting.

The swearing-in ceremony of Pranab Mukherjee as the new President saw Congress sending clear signal that Defence Minister A K Antony was the 'No 2' in the government as he was seated next to the PM followed by Pawar.

Congress sources said that Patel suggested to Chavan that the standoff was not targeted at him and was for a resolution of certain grievances at the Centre.

Asked about the possibility of forming a coordination committee for better functioning of the government, Dr Singh said, "We are ready to discuss with NCP on issues. In politics, there is give and take."

Congress President Sonia Gandhi, who is also chairperson of the UPA, refused to answer questions whether the standoff would be over on Wednesday. But the talk in the Congress was that Pawar and Patel, who had sent in their resignations from the government last week, would be present at the next meeting of the Union cabinet, normal held on Thursdays.

Signalling that the standoff could be a thing of the past, the Maharashtra CM is planning a reshuffle of his council of ministers, which has two clear vacancies. The monsoon session of the Maharashtra Legislature is concluding on Wednesday.

Patel disputed reports that his party has issued an ultimatum to the Congress and said there were certain concerns which have been raised with the PM and the Congress President. He insisted that the main issue was setting up of a coordination committee for the UPA in Delhi and also for the Democratic Front government in Maharashtra.

A Congress leader, on condition of anonymity, said the Maharashtra CM would be proactive in having the meetings of the coordination committee.

"All issues can be solved through dialogue... whenever we get an invite for talks, we are ready to go," Patel said. He also dismissed as baseless reports that Pawar was keen on being elevated as the defence minister or that he was interested in inducting his daughter Supriya Sule in the Union council of ministers.

Patel said a section of Congressmen were spreading canards to ensure that there was a divide between the Congress and the NCP. 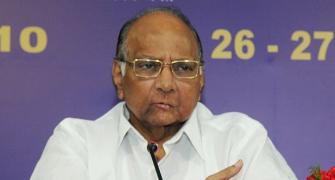 Resolve issues or we will pull out: NCP to Congress