Thousands stranded at Guwahati airport as Assam remains on boil

Hundreds of passengers remained stranded at the Guwahati airport on Thursday due to indefinite curfew and Internet clampdown in the city as Assam continued to remain on the boil over the citizenship bill. IMAGE: Security personnel stand guard on a road during a strike against the Citizenship Amendment Bill. Photograph: PTI Photo

From students to working professionals and old men to young women, people were seen squatting inside or outside of the Lokpriya Gopinath Bordoloi International airport at Borjhar area, about 30 km from the main city.

Security forces kept a tight vigil at the airport as Assam police personnel and commandos were deployed to guard the area.

Services were closed at prepaid taxi counters inside the airport premises in lieu of the curfew, a staff on duty said.

"I don't know how I am going to reach my campus in Amingaon. I tried to reach out to IIT-Guwahati authorities too, but vehicles are not being allowed to ply on the streets, so I am stuck here," she said.

Kawale said he would try to take a private cab till the point it was allowed and then contact one of his friends for onward journey.

Kanchan Pareekh, who travelled alone from Jaipur to Guwahati in morning flight, was left to fend for herself at the airport.

"My parents live in Guwahati. After my marriage two years ago, I have shifted to Jaipur," she said.

"I had booked my flight a few days ago and my mother had asked me to cancel the flight because of the situation in the city, but I did not as flight operations are still on," she said. "I had no idea that the situation was this bad here. I have contacted my father and he came in a two-wheeler."

Adding to the passengers' woes, many local taxi drivers who agreed to ferry passengers charged exorbitant fares due to the situation in Guwahati.

Many of the passengers were bound for outstation areas like Itanagar, Dimapur and Aizwal, and were left with no option but to wait endlessly at airport premises.

Many were squatting on sidewalks or resting on chairs hoping to get some mode of transportation for their onward journey.

Remi Hnamte and Zoram Muani, both in their twenties, came to Guwahati from Bengaluru.

"We were both travelling alone and struck up a friendship on the flight. Both of us have to go to Aizwal," Hnamte said. "But there is no way out. We contacted Mizoram Hous here and plan to spend tonight there only."

Usman Sab, an army personnel, was travelling with his wife and his three-and-a-half-year-old son from Bengaluru.

"I live in Dimapur, but I have no idea how to reach Guwahati railway station," he said.

Ajeet Jain, a chartered accountant from Jaipur, had booked a train for his hometown Dimapur, which he said got cancelled.

"I had gone to Jaipur for a marriage, the train got cancelled, so I booked a flight to Guwahati. Now, I am trying to find a way out to reach Dimapur," he said.

Thousands of people defied curfew in Guwahati on Thursday and took to the streets, prompting police to open fire as protests against the contentious Citizenship (Amendment) Bill intensified in Assam.

Police said they had to open fire in Lalung Gaon area in Guwahati after stones were hurled by protesters. The agitators claimed that at least four people were wounded in the shooting. 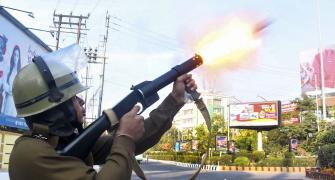