The ruling Trinamool Congress and the opposition Bharatiya Janata Party in Bengal might be pulling out all the stops to go for each other's jugular in the assembly polls, but the rivals share something in common when it comes to their choice of candidates in several high-profile seats -- turncoats over tried-and-tested leaders. 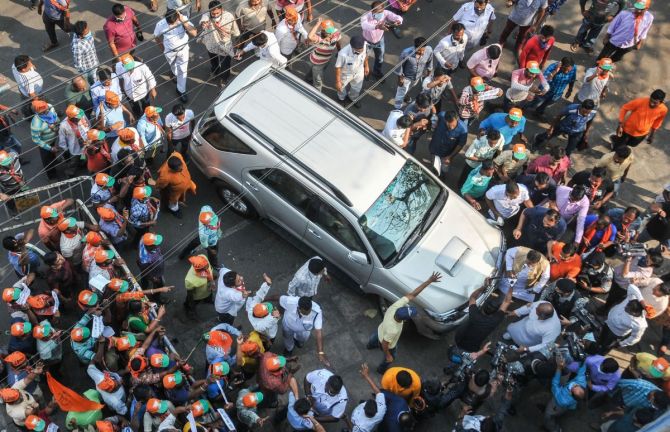 Once a reviled practice in the state, both the parties seem to have endorsed a record number of turncoats this time -- triggering a wave of discontentment among their loyalists.

The TMC, in its list of 291 candidates, has fielded around 16 turncoats who were either elected representatives of other parties or had joined the TMC over the last few years.

Taking a step further, the BJP, which named 122 nominees so far, has already placed its bets on 22 defectors -- most of them TMC deserters, including former state ministers Suvendu Adhikari and Rajib Banerjee.

Senior BJP leaders in Hooghly district, where violent protests had broken out over the party's nomination of TMC turncoat and octogenarian Rabindranath Ghosh, said grass-roots level workers are fuming over his candidature.

Similar agitations were reported in Kolkata and other parts of the state, including north Bengal, over the nomination of TMC deserters Santanu Bapuli, Arnab Ray and Dipak Kumar Roy, Gorkha Janamukti Morcha turncoat Bishal Lama and Left defectors Rinku Naskar and Biswnath Karak.

The TMC, too, faced a backlash from its supporters, after the party dropped 28 MLAs, including five ministers, from its candidate list this time.

It has nominated greenhorns and swapped candidates in at least 160 seats.

Denied tickets, seven TMC MLAs, including Ghosh, who was the face of Singur anti-land acquisition movement and Mamata Banerjee's former aide Sonali Guha, did not hesitate to switch camp.

Notwithstanding the furore, the two parties have defended their decision, stating that 'winning possibility' of a nominee has been given preference over emotions.

The ruling camp, however, is making efforts to quell the infighting, as it could further hamper the party's image, which has suffered a setback following the recent exodus.

For the BJP, fielding turncoats is more of a compulsion than choice, as the party, which has gained ground in Bengal only of late, did not have enough suitable candidates for all 294 assembly seats.

Since the announcement of the second list of candidates last Sunday, the BJP has been grappling with demonstrations across the state, albeit its leaders are trying their best to downplay the issue.

Senior central BJP leaders have been heckled in Kolkata as angry workers and activists laid a siege to the party's Hasting office here, prompting police action.

"We have leaders and activists who have worked very hard. Our party is growing in size in West Bengal, and it is necessary we accommodate as many prominent faces as possible.

"However, not all elected representatives who have crossed over to our party from other camps will get tickets. Also, it is not possible to please everyone," BJP state president Dilip Ghosh said.

The saffron camp's first list of 59 candidates had around eight turncoats, including Adhikari and former Communist Party of India-Marxist MLA Tapasi Mondal.

Its second list features 63 nominees, 12 of which are turncoats.

"We zeroed in on the names after taking into consideration several factors. In East Midnapore, there are 16 seats. Adhikari has pitched for his loyalists, who have followed in his footsteps and joined the BJP. In Howrah, Rajib Banerjee wields considerable influence.

"We have tried to accommodate them, but that, in turn, angered the old-timers. Had we done otherwise, the defectors would have created a stir. It's a precarious situation," a saffron party leader said.

The BJP, which had trained its guns on Mamata Banerjee following the exodus from the TMC, is now facing a tough time putting its house in order.

Sensing trouble, top BJP leader Amit Shah rescheduled his itinerary and flew down to Kolkata recently to hold meetings with the state leadership.

According to saffron camp sources, the party will have to be careful while announcing names for the remaining 172 constituencies.

Since the 2019 Lok Sabha polls, 26 MLAs and two MPs of the TMC, three legislators each of the Congress and the CPI-M, and one from the CPI have crossed over to the BJP.

Except for former state cabinet ministers Adhikari and Banerjee and Rajya Sabha MP Dinesh Trivedi, none of them, however, resigned as MLA or MP.

Infighting has also flared up in the ruling camp, after it dropped several sitting MLAs from its list.

In several areas where the TMC is on a sticky wicket, including Malda, North Dinajpur, Murshidabad, Siliguri, and Nadia, the party has fielded turncoats. Both Congress and the Left defectors feature prominently in its list of candidates.

A senior TMC leader said, "Turncoats have been fielded for three reasons -- we wanted to beat the anti-incumbency wave by nominating faces who were not associated with us in the last elections, the party did not have prominent faces in some areas, and we wanted to control factionalism."

Nevertheless, the TMC leadership noted that none of the turncoats, except Qazi Abdur Rahim, Rezaul Karim and Rafiquil Islam Mondal, is a recent joinee.

"Most of the turncoats that have been fielded joined the party two to three years ago. That factor did not lead to much trouble. We have faced protests in areas where our sitting MLAs were not re-nominated," the TMC leader said.

Criticising both the TMC and BJP over their 'Ayaram Gayaram' politics -- 'imported from Hindi heartland' -- the CPI-M said the two parties are out to destroy West Bengal's political culture.

"We have never inducted any elected representative from other parties. The TMC first attempted to destroy Bengal's political culture, and now the BJP is taking it to the next level. Never has Bengal seen such a large number of turncoats in the fray," CPI-M leader Sujan Chakraborty said.

Political analyst Suman Bhattacharya feels that it's a 'sorry state of affairs' in Bengal, where politics was largely ideology-driven.

"Even 10 years back, the situation wasn't like this.... Over the last decade, politics is Bengal has largely been revolving around turncoats. They are not just getting nominations, but are also being awarded plum posts in the new party," he said.