While the leadership of the biggest Opposition party, the Congress, has not reacted, even non-Congress and (now) anti-BJP parties like the Telangana Rashtra Samithi (TRS) have voiced no view on Banerjee’s appeal, reports Aditi Phadnis. 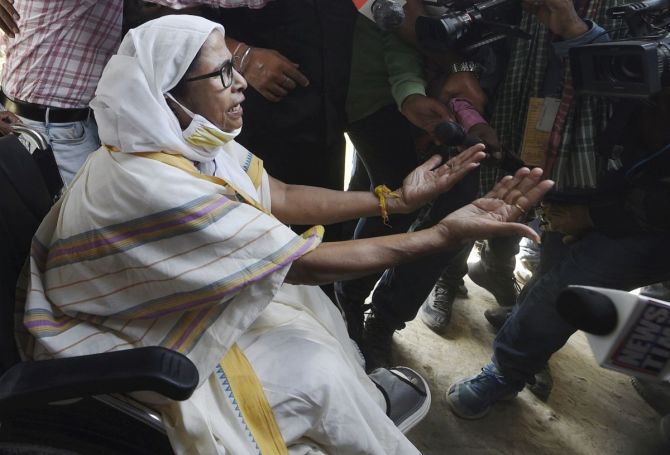 While the leadership of the biggest Opposition party, the Congress, has not reacted, even non-Congress and (now) anti-BJP parties like the Telangana Rashtra Samithi (TRS) have voiced no view on Banerjee’s appeal.

In a letter addressed to leaders of all major Opposition parties barring the Left, in the midst of the Assembly election campaign, Banerjee said the time had come for a “united and effective” struggle against the BJP’s ‘attacks’ on democracy and the Constitution, and that other party leaders should try present a “credible alternative” to the people of the country.

Though Banerjee specifically referred to the travails of the Delhi CM Arvind Kejriwal and his Aam Aadmi Party (AAP) which she claimed had been a victim of the BJP’s efforts to undermine federalism, the AAP is yet to respond.

There was no response from the TRS either, which had adopted a position of equidistance from the BJP and Congress till recently, when the BJP not only defeated it in important by elections but began attacking it in Telangana.

Even the Shiv Sena, while supporting Banerjee generally, was cautious about endorsing Opposition unity under the Bengal CM’s leadership, saying merely that the letter ‘had been received’ by party supremo and Maharashtra CM Uddhav Thackeray.

The most enthusiastic response was from the Nationalist Congress Party (NCP) with party general secretary Nawab Malik saying top party leader Sharad Pawar was indisposed and unable to respond personally but that the “party supported her” completely. In fact, Pawar, Malik said, wanted to show his appreciation by campaigning in the assembly elections but was taken ill: and might do so in the later phases of the elections.

Unexpected agreement and support came from the Kashm­ir-based People’s Democratic Party (PDP). Former Kashmir CM Mehbooba Mufti reacted immediately to the letter. “This process (of undermining federalism) started in 2019 with the dismemberment of Jammu and Kashmir and stripping it of its special status which was again a constitutional guarantee. Unfortunately, not many in the Opposition used their collective power and voice to oppose this unilateral and illegal step,” Mufti alleged.

She also referred to the detention of political leaders and alleged harassment by central probe agencies. “Therefore, the need of the hour is to unite and put up a collective fight against this onslaught,” she added. Although Mufti’s political rival Farooq Abdullah also got the letter, he is yet to respond.

The Congress did not respond as a party. But individual leaders did voice support for the proposal.

Rajasthan CM Ashok Gehlot, who is campaigning in Assam, told reporters: “Democracy is under threat and people should understand its gravity. The Central Bureau of Investigation, Enforcement Directorate, Income-Tax department and other agencies are working under pressure from the central government. Those who express disagreement are labelled anti-national,” he said. The Congress is facing a leadership crisis and leaders are wary about endorsing Banerjee’s bid for fear of being misunderstood.

The letter comes months after top NCP leaders said the United Progressive Alliance was in danger of becoming a defunct organisation and that Sharad Pawar should be asked to lead it. Within the Congress, there was a discussion about exactly when Pawar would make a move seeking to reunite ‘former and real Congressmen’.