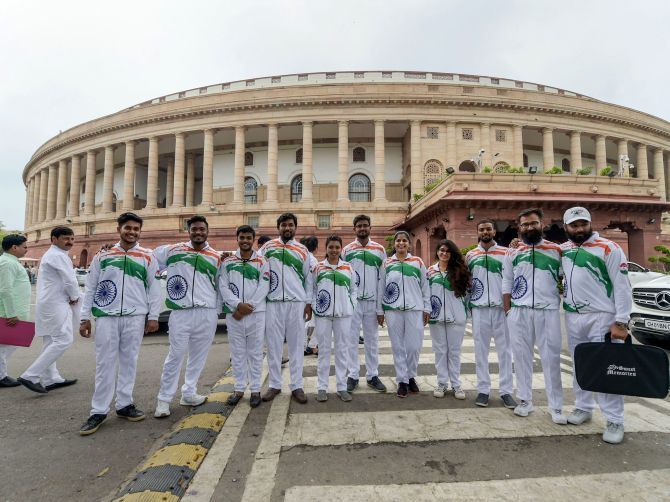 The Union government on Thursday decided to extend the Parliament session till August 7 to complete its legislative agenda.

The decision was taken at a meeting of the Cabinet Committee on parliamentary affairs in New Delhi, official sources said.

Following the decision, parliamentary affairs minister Pralhad Joshi told Lok Sabha that there were around 17 pending bills as he explained the reason for the extension. Speaker Om Birla then made an announcement in the House about the session's extension till August 7.

In Rajya Sabha, the government is set to formally propose the extension on Friday at the business advisory committee meeting, the sources said.

Though opposition parties like the Congress and the Trinamool Congress had opposed any move to extend the session, the government has the prerogative to do so, they said.

There has been precedent of Parliament session being extended beyond the original schedule, they added.

Prime Minister Narendra Modi had first indicated about the extension in a BJP parliamentary party meeting, saying it can be done, if necessary, to complete the government's legislative agenda.

TMC MP Derek O'Brien slammed the Centre for it "last-minute decision" to extend the current session of parliament, saying "it is not a college campus".

O' Brien said the way the decision was taken was a "mockery" and the announcement was by Joshi very casually.

"This is not a college campus where we are organising a intra-college festival. This is the Parliament of India," the TMC MP told reporters.

He also accused the government of trying to "bulldoze" parliament and said that this kind of attitude was neither good for parliament nor for the country.

He, however said that the the ways of the ruling party did not surprise him as the BJP was "attempting to destroy all institutions."