The proceedings in Parliament were disrupted for the sixth consecutive day on Wednesday with treasury and opposition benches sparring again over the Rafale
deal issue. The Telugu Desam Party, the All India Anna Dravida Munnetra Kazhagam and Dravida Munnetra Kazhagam continued to raise the issue of the dam over the River Cauvery and special status for Andhra Pradesh in both the Houses. While the Rajya Sabha was adjourned for the day soon after it met at 11.00 am, the Lok Sabha saw repeated adjournments, but managed to pass the Surrogacy (Regulation) Bill amid the din.

Efforts to pass another legislation, The Consumer Protection Bill, failed as Speaker Sumitra Mahajan said there was too much of din, and the bill would be taken up on Thursday.

Wednesday was the sixth working day of the Winter session which saw disruptions and adjournments over Rafale jet seal, special status for Andhra Pradesh and protests over construction of a dam over Cauvery river.

Both Houses were adjourned for the day on day one of the session on December 11 after paying obituaries to former prime minister Atal Bihari Vajpayee and some sitting members.

From December 12 onwards, the two Houses have witnessed frequent disruptions.

While a bill to grant equal rights to persons with disabilities was passed in the Rajya Sabha this week, the Lok Sabha has so far passed two bills, including the one on Rights for Transgenders.

It was a total washout for the Rajya Sabha on Wednesday.

The upper house was adjourned for the day after Congress members holding placards seeking a Joint Parliamentary Committee into the Rafale deal trooped into the well of
the House soon after official papers were laid on the table.

They joined members of the AIADMK and DMK who have been trooping to the well of the House over the Cauvery issue ever since the Winter Session began.

Amid the uproar, Parliamentary Affairs Minister Vijay Goel demanded that Congress deputy leader Anand Sharma withdraw the remarks made by him in the House on Tuesday.

Goel said Sharma had wrongly quoted him to say that he had demanded an apology from Rahul Gandhi on the Rafale issue.

Chairman M Venkaiah Naidu said he would look into the records.

As the slogan shouting from both sides continued, Naidu said, “It is very clear that none of you want the House to run”.

“I don’t want this (ruckus) to be seen by the people,” he said, while adjourning proceedings for the day.

The Lok Sabha was adjourned on three occasions on Wednesday amid uproar after the government rejected the opposition demand for a JPC probe into the Rafale deal.

As the House re-convened for the second time in the noon, members from the Congress, AIADMK and TDP trooped into the Well, holding placards and shouting slogans.

While AIADMK members protested the construction of a dam across the Cauvery river, those from the Congress demanded a JPC probe into the Rafale deal.

The TDP sought to raise issues related to Andhra Pradesh.

More than 40 members were in the Well.

Some members from the ruling BJP also sought to raise certain issues from their seats.

Mallikarjun Kharge, Leader of the Congress in the Lok Sabha, said there were “serious apprehensions” in the minds of the people over the Rafale deal and this needs to be probed by the JPC.

Responding to this, Parliamentary Affairs Minister Narendra Singh Tomar said the government is ready for a discussion on this issue, but rejected the demand for a JPC.

Home Minister Rajnath Singh said the government was ready to discuss any issue demanded by the opposition, including the Rafale deal.

When the House met against at 2.00 pm, the surrogacy bill was taken up for consideration. Some members participated in the discussion before the bill was passed amid the din. 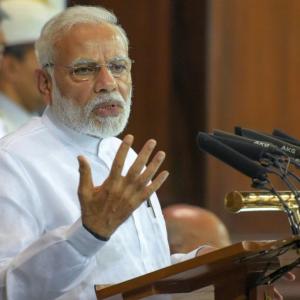 Country loses the most due to disruptions in Parliament: PM